Liz Pead graduated from New Brunswick College of Craft and Design and completed her BFA with Honours Distinction at OCADU. She makes Canadian landscape installations from just about anything she can get her hands on including recycled hockey gear, wool, thread, and sometimes oil paint. Liz likes to write about other artists. She has a dirty little ink drawing habit. She plays ice hockey and has spent a lot of time in Iceland, playing hockey and being inspired by the landscape and artists who live there. In October 2013, she completed her Icelandic hat trick: all three National Ice Hockey Arenas have her work in their collections. In May 2014, she went to Blönduós, Northern Iceland, for a month-long residency at TextileSetur, researching traditional Icelandic materials, techniques and patterning. In 2017 she received the Mary Diamond Butts Award from Craft Ontario recognizing Excellence in Embroidery. Her work is currently on display in the group exhibition Power Play: Hockey in Canadian Contemporary Art at the Art Gallery of Windsor until May 12. 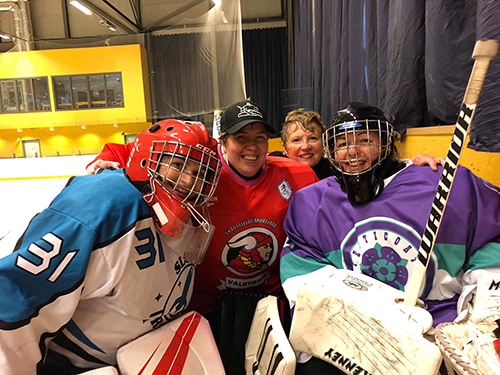 “Give me the big stick,” I said, “How bad could it be?” I became a goaltender because someone got pregnant. Watching a lot of hockey growing up, I didn’t play until I got my first set of equipment at twenty-eight – a wedding present from my husband. “Don’t be a goalie,” was his only advice. Someone put a goalie stick in my hand. I was smitten!

A female recreational goalie is a Unicorn. Rare indeed. I could play seven days a week, four hours a day. Since I like my family, I limit myself to a couple times a week and tournament trips around the world – Iceland (several times!), Germany, Czech Republic, Austria, Lake Placid, Nashville, and several places in Canada. Not bad for a gal who was told “girls don’t play hockey” growing up in New Brunswick in the eighties. 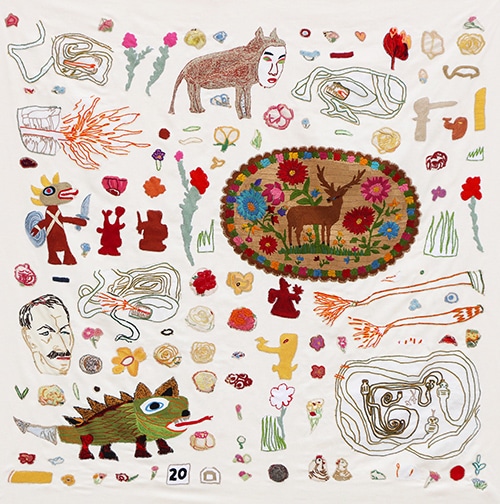 I’ve been embroidering landscapes on woven and knitted metal meshes for the Stitched Landscape Series for the past couple years. Last July I saw the MNBAQ exhibition Hand Made/Fait Mains and discovered the work of Anna Torma. The Esker Foundation has exhibited her work and if you are in Vancouver, look out TransLink buses wrapped with her images! 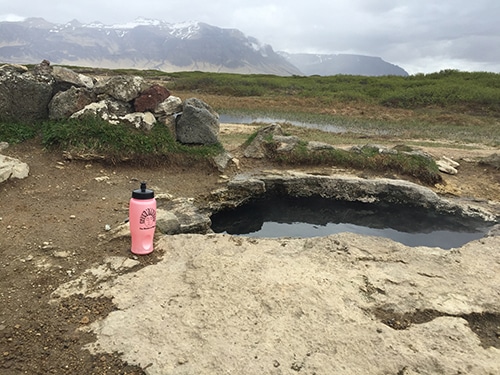 Hot tub in the middle of a field in the shadow of a volcanic crater, Borgarbyggd

In 2011, a women’s hockey team from BC needed a Unicorn (goalie) for a tournament in the Land of Rainbows. I stepped up and fell in love with the landscape, the sagas, the music (Olafur Arnalds and Arstidir are a couple faves), and the amazing people I met in both Reykjavik and Akureyri. I discovered the TextilSetur in Blónduös and spent May 2014 there. A game changer for me, I dove headlong back into my textile work. My first two diplomas are Fabric Surface Design (1993) and Textiles (1995) from the NBCCD, but I thought being a capital-P painter was more important. Iceland bitch-slapped me back to reality. I was attracted to the material aspect of the recycled hockey gear I was using as paint, and I had never stopped making and using textiles in my work. 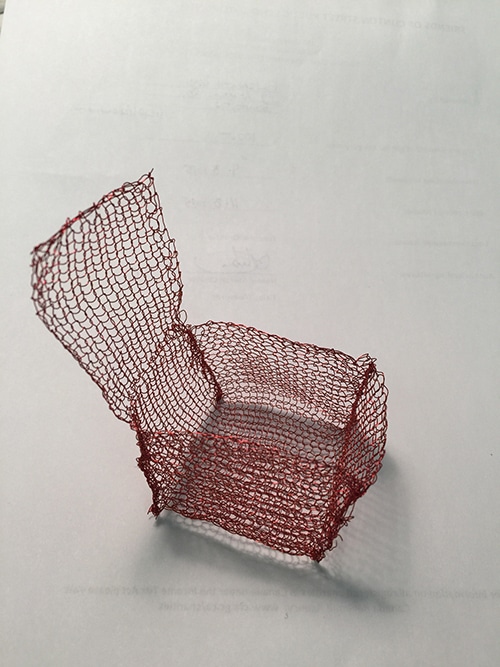 In Blónduös I discovered knitting. Or met a press gang of knitters? One of the gals (Lisbeth Tolstrupand Jóhanna Erla Pálmadottír) hauled out a Knitting Machine and had the thing up and whizzing along in no time. “It’s like a loom, for knitting.” Oh. I know looms. So, how bad could it be? (See above, about the goalie stuff. I should know better than to ever ask this question.) 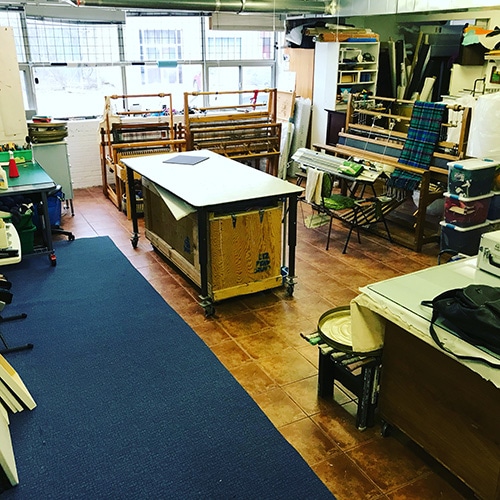 Currently the studio looks like a cross between a hockey locker room, a pre-Industrial Revolution weaving mill, and a home for wayward knitting and sewing machines. I’m working on the Canadian Suffragette Women’s Ice Hockey Team Dressing Room – an installation challenging ideas of “locker room talk” and how women’s intimacy and friendships in the locker room support and develop each other both on the ice and off.