Life of a Craphead at Centre Clark, Montreal

I heard raves about Life of a Craphead’s exhibition at Centre Clark before seeing it: “raw and funny”, “best art show in ages”, and, my favourite, “can’t stop crying and thinking everyone else can just stop making art now.” I’ll join the gush-chorus here. Entertaining Every Second offers brilliant, searing, and healing responses to anti-Asian racism in French colonial history, US military history, 20th Century British literature, and, uncomfortably close to home, Canadian art and its institutions.

Life of a Craphead (aka Amy Lam and Jon McCurley) position their work cautiously in relation to comedy. With backgrounds in performance, theatre, and writing, they pull off sharply critical work with sensitivity, wisdom, and the lightest of comedic touches. Punchlines for them are titles, prompts, or starting points for artistic research. The comedian’s imperative to reach audiences is first announced in the exhibition’s winking title taken from Korean-American artist Nam June Paik’s lament: “I am a poor man from a poor country so I have to be entertaining every second.” Aside from this sympathetic dialogue with Paik, most of the show’s interlocutors are targets of criticism.

The installation Ceilings with Clowns illustrates an expression for obstacles to Asian women’s advancement in the workplace. Three contorted clown sculptures are squeezed in between the gallery’s ceiling and a glass and bamboo one. The work responds to comments made by curators at an art fair in a small town in Ontario who felt that the pair’s proposal to make a “bamboo and glass ceiling” was “not that funny.” Lam and McCurley added clowns to satisfy the demand, and a cheeky didactic panel instructing us to stand under the work to “feel what it’s like to be an Asian woman.” A little like Carolee Schneeman’s decision to literally internalize a dismissive review of one of her films in Interior Scroll, the work incorporates the jury’s remarks while setting up a powerful metaphor for the struggles of intersectional feminists. 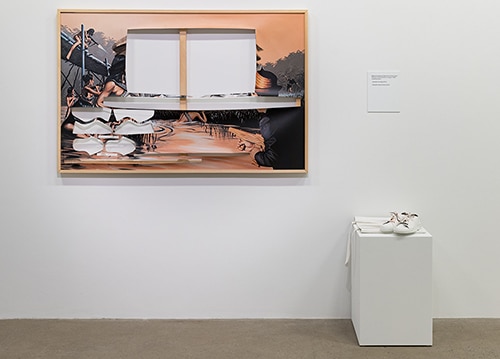 Lam and McCurley carry on their irreverent conversation with art-world authority in Making Something Positive out of Chris Cran’s Painting ‘Self-Portrait with Combat Nymphos of Saigon’ (1985). Once again, their play with signs is pointed. A vinyl print of the Canadian painter with a wooden gun and fedora amid half-naked Vietnamese women in a swampy war zone is cut into bits to make the shoes and tote bag on a nearby plinth. It’s hard to not read a connotation of race in the white spaces left by the cut-outs, and in the squeaky clean prêt-à-porter by-products of what McCurley describes as a hurtful painting that is likely the best-known one in Canada of Vietnamese women.

Whereas the above pieces show an impressive fluency with visual signs and a gift for troubling them, the writing in the exhibition ranges from hilarious and well-researched polemics to affecting personal testimony. A copy of British author Graham Greene’s novel about love and war in Vietnam, The Quiet American, languishes in the middle of the gallery with well-worn Post-It notes marking passages where the story’s female character Phuong carries out tasks for American and British men. Large text panels mock the book from across the room. Between little chili pepper icons of the kind seen in restaurant menus, summaries of Greene’s misogyny are interspersed with gorgeous, indignant, and probing writing meant to restore the depth of experience denied to Phuong in the book. Lam here writes as a “sister” to Greene’s silenced character, but also to countless literary and artistic stereotypes of “Oriental” women from Cran’s “combat nymphos” to Flaubert’s “Kuchuk Hanem.” 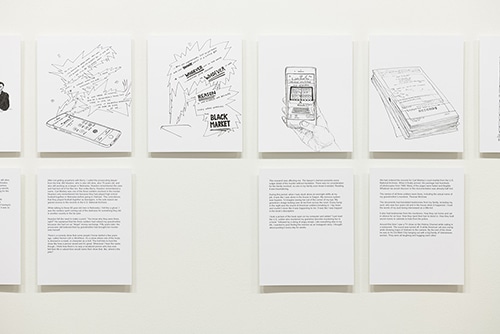 Life of a Craphead, Find the U.S. Soldier Who Killed Your Grandma (detail) (photo: Paul Litherland)

The exhibition’s masterpiece is surely Find the U.S. Soldier Who Killed Your Grandma, a memoir hung in mostly paired panels of drawings and text across three walls. It follows the pair’s intrepid search in Canada, the US, and Vietnam with clues gathered online, from family, by phone, and in national archives for the soldier who murdered McCurley’s grandmother and served only a few years for the crime. Conceived as an app for the Kitchener-Waterloo arts festival, the initial plan was to find the house of the soldier and take a photo in front of it. But as the search “went sideways,” the duo documented all its twists and turns, its chilling encounters with lawyers, heart-warming episodes involving family, and serendipitous discoveries in the press and in books. The traumatic impact of the story is mediated for readers by illustrations of the many documents, webpages, and social media profiles viewed on screens along the way. In a painstakingly copied page from the US Army daily Stars and Stripes about a “Private Sentenced to 5 Yrs. for Unplanned Murder of Girl,” the very ritual of recording research tools and materials in drawings comes across as therapeutic – a way of pausing mournfully on forgotten injustices of the war in Vietnam.

I’ll leave the conclusion of the story out of this review so as not to spoil it, and end instead with requests for the artists to turn this piece into a book (because I badly want a copy), and for anyone who can make it to Centre Clark to go see this treasure of a show.

Life of a Craphead: Entertaining Every Second continues until April 6.
Centre Clark: http://centreclark.com/en
The gallery is accessible.