A Crack in Everything at the Musée d’art contemporain de Montréal, online

The virtual exhibition A Crack in Everything, originally organized and exhibited at the Musée d’art contemporain de Montréal in 2017, takes as its impetus the work of Leonard Cohen to explore artwork from their permanent collection and pieces commissioned specially for this show. The creations of over eighty artists – from Marina Abramovic and Abbas Akhaven to Jeff Wall and Catherine Widgery – are divided into sub-categories: Poetic Thought, Spirituality & Humility, Love, and Loss & Longing. After a year of living in microcosmic bubbles of isolation, these four thematic groupings have become ever more consequential.

Cohen found in poetry a way of understanding the human capacity to feel deeply. As the exhibition text notes: “For him, poetry transmits a kind of wisdom and is suffused with a certain amount of mystery.” This ancient technology for portraying observances of the world and the human condition, may be, in the mess of 2021, a light that has emerged, just as Cohen suggests in his celebrated line. While the exhibition posits four possible entry points into the late musician and poet’s work, I chose to concentrate on one. 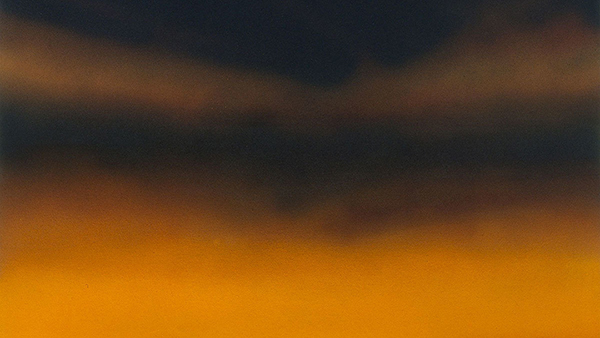 Poetic Thought includes twenty-four artworks ranging from painting, sculpture, video, and sound installations. Paired with each are supplementary materials including Cohen’s songs, poems, letters, self-portraits, and interviews. The visual art speaks to the poetic realm directly or indirectly, sometimes through a title, sometimes through the presence of written text, or sometimes in the use of materials. Rita Letendre’s painting Alone with my Thoughts characterizes her practice in 1980s when she was exploring sensation and colour through abstraction. The colours are vibrant and muted, with a softness that is evocative of an idea or feeling rather than anything specific. The work describes a subconscious plane rather than a literal one, offering, as the title suggests, time for contemplation. Letendre’s contribution is a succinct opening towards a visual way of speaking to the poetry of life. 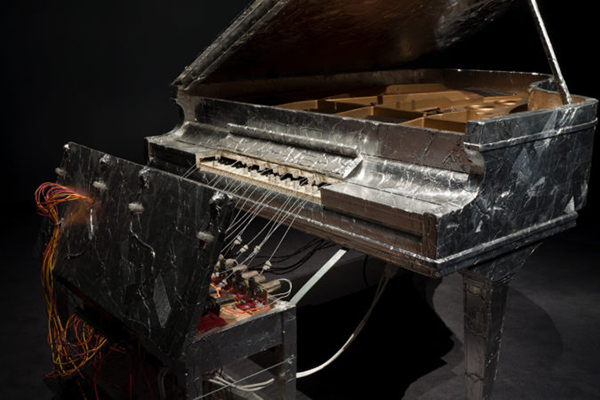 The repurposed piano at the centre of Battements et Papillions by Jean-Pierre Gauthier speaks eloquently to the possibilities of poetry and its cathartic reach in the world. When read aloud the materials of the piece are a poem:
Piano
Bench
Aluminum insulating tape
Solenoids
Motion detectors
Relays
Microcontrollers
Transformers
The list is phlegmatic and appears to lack the guts of imagination, yet it presents itself as a kind of poetry: disparate items drawn from digital and technological language – one that seems to stem furthest from poetry itself. The piano has been altered with servos, wires, and motion detectors. As the viewer approaches the piano, sensors are triggered and random keys and pedals play. The poetry arises from the arbitrary creation of music, as if a ghost sat at the bench tapping the keys. 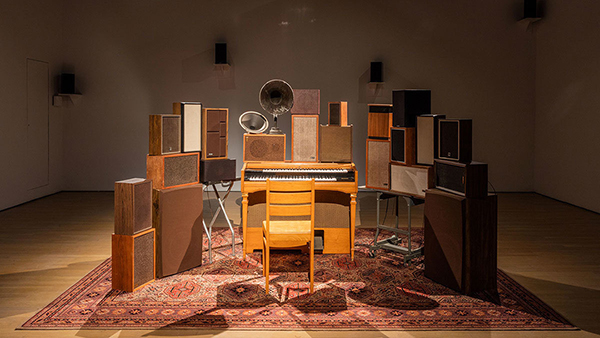 The Poetry Machine, commissioned by the MAC from Janet Cardiff and George Bures Miller, dives into a similar sense of poetry-as-music as experienced in Gauthier’s work. Excerpts from Cohen’s Book of Longing read by the author are programmed into a 1950s Wurlitzer organ set in the middle of the installation and surrounded by speakers of varying sizes. Visitors are encouraged to press the keys and activate the recorded excerpts. You can play one key or many, changing the timbre, the layering, the meaning, and the emotion behind Cohen’s words. As Bures Miller notes, the piece acts like a version of the I Ching: “…a person can… press one key and get a message… from Leonard.”

While the exhibition is an impressive exploration of Cohen’s oeuvre, I found the virtual version of A Crack in Everything problematic. As the world constricts physically it simultaneously expands digitally, allowing visitors to experience art in places they can no longer reach in person. However, I am left wondering how effectively the experience of art can be transmitted online. Much of the work in Poetic Thought, the accompanying texts, and supplementary materials focus on the act of writing poetry rather than an exploration of the essence of poetry. Many of the texts accompanying the artworks make note of how the pieces tie into Cohen’s multifarious writings. These observations are valid, but less challenging and more superficial than I anticipated. As a virtual exhibition A Crack in Everything acts more as an archival space for the preservation of a past exhibition than an exhibition in its own right.

Then again, perhaps it’s my own clumsiness at navigating the increasingly complex stratospheres of the internet. Maybe it’s “screen fatigue.” Whatever it may be, I found the exhibition overwhelming. I was able to navigate through the website and find necessary information; however, I often felt the sensation of wading through abundance, pushing too much aside to find an entry point that would lead me to the kernels of wisdom within. I was searching for the spark that would light up my neurons and delight my ocular nerves. My suspicion is that transmitting the magic of poetic thought, of Cohen’s majesty, and the arc of profound contemplation that sweeps through my being when I engage with artwork is simply a difficult feat to achieve online. Was this lost because of the context of sitting on my couch or at the dining room table instead of wandering through the galleries of the MAC? Whatever the case, the impact and poetry of it all was lost for me when this exhibition was translated from something I could inhabit into HTML code.

A Crack in Everything: https://expocohen.macm.org/en/explore
The exhibition continues until February 12, 2024.