The promotional image for Jeneen Frei Njootli’s exhibition small mounds of flesh form at PLATFORM Centre for Photographic + Digital Arts shows their hand lying softly against the ground. Mosquitos dot their arm – a view that, seen from one’s own eyes, would normally elicit an impulsive slap. To take a photo of this moment, I imagine Frei Njootli must have been careful not to move too suddenly so as not to scare the insects away. The more I look at the mosquitos on their arm, the more it feels like I am zooming into the insects’ sense of time as they rest while feeding on the artist’s blood. 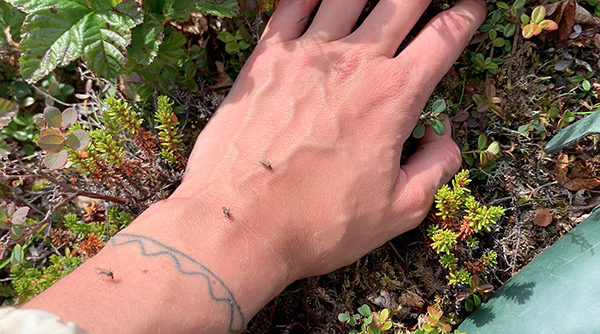 The exhibition brings together works documenting a performance by the artist which focuses on their relationship to land – a relationship that is unavoidably specific and personal. In regards to strategies of communication to the viewer, it engages in a politics of refusal – perhaps to protect that which is personal. Within the video and sculptural works, Frei Njootli plays with framing, scale, and focus to put a kind of fog over the ease of access viewers have to the physical or indexical content of the artworks.

In the main gallery, a large projection of footage showing a person in a field is accompanied by atmospheric audio. As a viewer, I assume the person is Frei Njootli, but I can only register that there is a human in this landscape if I sit with the video long enough. There isn’t much discernible action in the footage, which is mostly out of focus. Slowly, the focus deepens and I begin to see more clearly. But it blurs again before I can make much out. To the side, warehouse shelving holds large, abstract wooden pieces. In a smaller enclosed section of the gallery, a monitor is propped on the floor against a wall with a curved, thin piece of wood about two feet long in front of it. The footage here is in shallow focus, from a low angle pointing up to a leafy tree. The light creates a glittering effect as it streams generously through the leaves. The only thing that falls within the range of focus are bugs flying in front of the camera.

The last couple of times that Frei Njootli presented their work in Winnipeg, I missed out. Once I arrived at their performance in the basement of the HBC building literally moments after they finished. The fact that I made it to the opening night this time in order to experience their work first-hand feels ironic and coincidental: Frei Njootli often performs live instead of displaying video documenting their performance, as in this case.

It’s a coincidence that I was just talking about mosquitos with an entomologist friend a day or two prior to this exhibition opening. They snacked while we sat in a field and I asked what they found interesting about mosquitos. My friend answered, giving details about seeing them under a microscope. A wasp started drowning in their soup and instead of panicking, as many of us would do, my friend helped the insect out and patiently let it recover on their arm. It’s also a coincidence that Frei Njootli happened to pop into the smaller room within the gallery while I was watching the video. I asked about the curved wooden piece and they told me it is a mosquito’s nose. I wondered what the other sculptural wooden pieces might be.

The grouping of works in small mounds of flesh form are still, quiet documents of the artist’s engagement with and relation to land and the beings around them. In return, the viewer’s experience of these documents must also be rooted in time spent with them and in reflections on our own relational practices. Despite this hypercapitalist world that keeps failing us before our eyes, Frei Njootli’s exhibition focuses on intimate pauses and ephemerality. The here-and-now of kinetics and relationality conceptually ground these works and inform our readings of them.