Jean-François Provost’s solo exhibition at Studio 21 presents us with the obsessions of an abstract painter. There is a clear interest in composition, the interplay of line and colour, the investigation of mass and depth, and experiments in the activation of space. These are formal concerns straight out of a 1950’s Abstract Painters Handbook, but is there more? In a world of chaos and transition, is there still a place for such intellectual artistic concerns? A closer look reveals that the tropes of abstract painting might be a stepping off point – a beginning, not an end.

Let’s look at Le Départ: all greys and blues, offset by soft pink, vibrant orange, white, subtle hues of green, and a dash of red. The smooth surface of the canvas is partially overlaid with roughly collaged bits of painted paper, peeled, picked at, and ripped. Rough childlike pencil marks cut circles and shapes into the canvas. It sounds chaotic, but in the jumbled rhythm of staccato marks and colliding forms is a certain harmony. In his artist statement Provost says that he begins in a “completely Automatist manner with Indian ink, graphite and sanguine.” I can imagine him clearing his mind and beginning his painting by letting his subconscious guide the materials. That is only the start – le départ – for there has obviously been a cleaning up process or reevaluation. The painting has become, as he puts it, “a creation that will be constructed in a completely studied and reasoned manner.” The questions of form, balance, and design asked in the initial mark-making are addressed and considered. The painting attempts to make sense of its own chaos. In other words, he has made a mess and then cleaned it up. Perhaps this is what’s relevant in our time of social, political, and climate crisis.

My inevitable pitfall when looking at abstraction is to see things that aren’t there as my mind desperately wants to make sense of the image. I project my own thoughts, opinions, and desires on the work. When I look at Le Départ, I can’t help but see a bustling harbour scene: the white rectangle is a lighthouse or a container ship in the distance, those rough pencil shapes are people on a stroll, the dash of red is a stop light. In fact, all the paintings resemble cityscapes to me, and I’d swear they were specific places in Halifax and Montreal. I won’t go on; listening to someone list what they see in an abstract painting is worse than listening to someone recount their dreams. And yet, that’s just it really. The beauty of this kind of work is the point where the viewer’s subconscious meets the artist’s subconscious, and something new is revealed. Le départ. 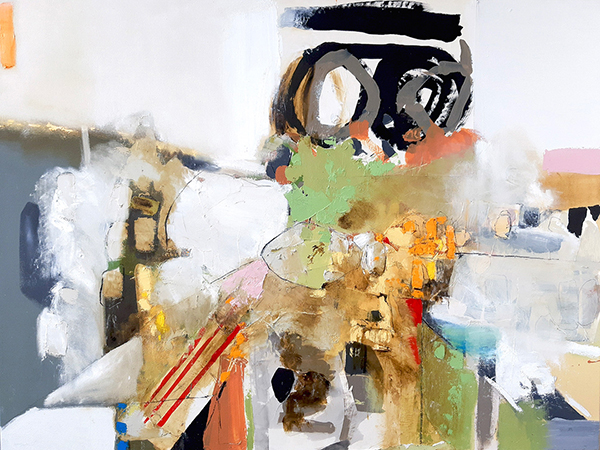 Back to the original question. Are the abstract concerns of the past still relevant? For Provost they appear to be a necessary jumping off point, but not the final answer. His search for composition, depth, invigorated space, and balance takes us to a place where everything is connected, each colour and mark affects the other, and chaos is given a semblance of order. Or, at least, captured and stilled for a moment.