How will we be with you? at Onsite Gallery, online

Presented by OCAD U’s Onsite Gallery and curated by Lisa Deanne Smith, How will we be with you? is an ongoing program of audio-based online projects by artists, writers, musicians, storytellers, activists, and their many collaborations. The aim is to suggest ways “to complicate and unflatten our perception of difference—to widen our ‘we’ while valuing the uniqueness of our ‘you’” as well as deepen our understanding of the practice of listening. Each work is accompanied by a “listening setting” where listeners are encouraged to place themselves in the midst of plants, trees, water, or earth, or simply be more aware of what it is to be with and in our bodies. Ideas of gratitude, relationships of reciprocity over extraction, and listening to how our world and those we inhabit it with speak to us are explored through the many sounds and words assembled weekly since December and continuing until the end of this month. 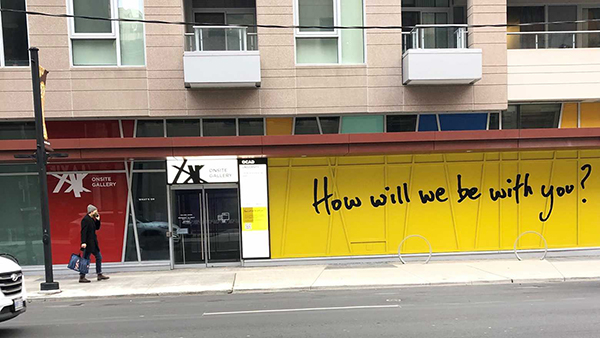 How will we be with you? at Onsite Gallery, website image

In Bonaventure Soh Bejeng Ndikung’s audio essay, The Globalized Museum? Decanonization as Method: A Reflection in Three Acts, he asks us to consider the many interdependent “multispecies” relationships that make up our world. Ndikung asserts that an embodied, intersectional consideration of the communities, collaborations, and “entanglements” of the local – rather than the “flattening” idea of the global as universal – can resist the colonial, “conventional referencing phenomena” of the canon, making way for museum projects and community engagements that are sustainable and action-oriented rather than merely symbolic. A key to decanonization is to “re-appear, re-write, re-articulate and re-phrase” erased knowledges and histories “not in relation or reaction to an existing canon,” but to separate entirely from the very idea of the canon. In Syrus Marcus Ware’s conversation with Yousef Kadoura, Kayla Besse, and Kristina McMullin, he discusses how this resistance is further taken up in activist spaces and disability justice work where BIPOC, Deaf, Mad, sick, disabled, and crip people can perform a “radical reimaging of our entire world” beyond a conception of life based on colonial, capitalist, and ableist conceptions and systems of value. He describes this envisioning through art and activism as mutually supportive, where the relationships and life outside of activism are celebrated and honored. 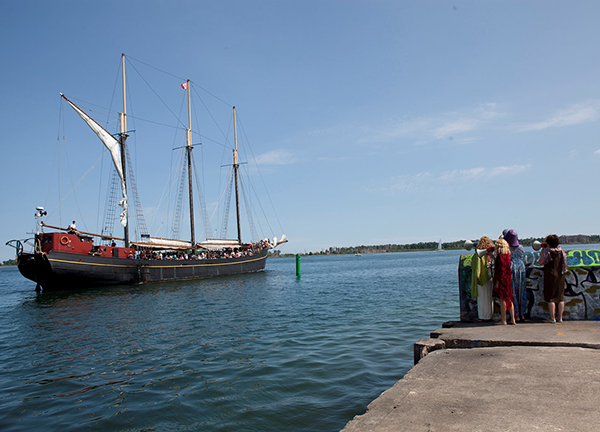 Jeremy Dutcher re-articulates a lost history through a conversation in song with the voices of his ancestors. In sweeping classical compositions, Dutcher echoes the intricate textures and shifts in tone from 1907 recordings of Wolastoqiyik songs and stories, creating a dialogue of Indigenous knowledge which destabilizes comparisons with Western musical traditions. Conversation as collaboration is also woven into the projects of Levyi-Alexander Love and nichola feldman-kiss. In Love’s spoken poem Marked As Complete, he asks: “How can I be with you now when I can’t be with me?”, a question posed to both absent personal relations and the audience. To hear Love’s poem spoken in real-time – with all the pauses and breaths of live performance – is to feel his words through a specific temporality of physical presence. In feldman-kiss’s performance, Siren / holding space, they join a collaboration of voices that similarly transmit and embody knowledge through the space of physical duration, performing a convergence of the vocal tradition of the ululation with the “polycultural context” of Toronto. 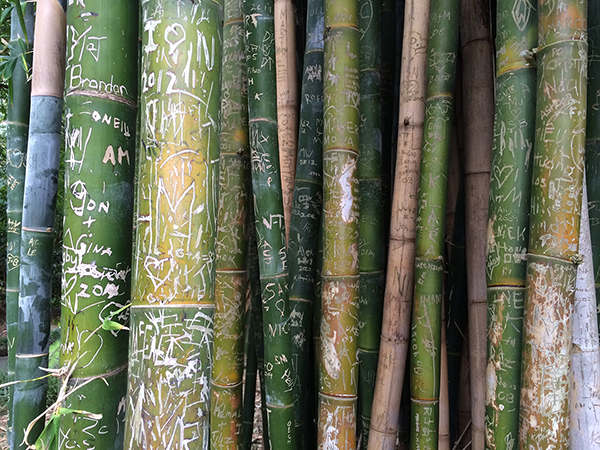 An oboe signals the beginning of a performance inspired by Robin Wall Kimmerer’s book Braiding Sweetgrass: Indigenous Wisdom, Scientific Knowledge and the Teachings of Plants. As I write “an oboe signals,” I catch myself: what does it signal, and why specifically a signal? Instead, what might it mean for an oboe to speak? This questioning is influenced by Kimmerer’s notion of the “grammar of animacy,” the idea that what we perceive as animate versus inanimate comes directly from the learning of language. In Kimmerer’s Potawatomi language, “grammatical differences charge even inanimate beings with an essential animacy.” In the performance, Sara Fraker’s oboe guides the listener through a narrative of sounds such as air traveling vast distances, harsh textures of wood being sawed and trees felled, and heightened spaces of wind, water, birds, and insects. Throughout, Fraker’s oboe is a presence that not only links each sound space, but ties directly to its hardwood materiality and place of origin – the trees of the Dalbergia Nation – to whom Fraker and composer Asha Srinivasan have offered this work in gratitude.

Provided as a link to additional reading, a conversation between Kimmerer and Srinivasan further explores what it means to listen to the land when listening is also in relationship to and with. This practice of listening involves using and considering other senses as in conversation, such as touch: sound is physical and extends to mutual listening between beings. This is reflected in The Sharing: A Vision, an audio pipe ceremony shared by Elder Whabagoon, wherein she addresses water, trees, the sky, and the stars as nations, as that which is within our bodies, and as that which lives in the space of breath between us and the physical, spiritual world. To be more aware of the moments, relational states, and influences that allow us to listen – to understand what is being listened to – is both astonishing in its interconnectedness, and humbling in its ever-presentness. Knowing this is re-learning how to notice what listening is. As Kimmerer says, it’s like inhabiting a poem and accepting its invitation to speak through it; it’s like “what you just said makes me hear that sound.”

How will we be with you? continues until May 1.
Onsite Gallery: https://www.ocadu.ca/event/how-will-we-be-with-you