Hannah Rickard’s One can make out the surface only by placing any dark-coloured object on the ground at The Polygon Gallery depicts the movements of paper across a studio floor performed by two people. Their decisions are a combination of rehearsed actions and intuitive placements of black and white prints that depict photographs of geological events such as lightning strikes and typologies of waves. An obtuse black diamond shape is included amongst these otherwise naturally occuring textures and images. This shape is a product photograph displaying a black tarpaulin laid flat on the ground. The geometry of this image, alien among the lighter reproductions of horizon lines and water textures, distills the architecture of the set (black tiled walls and floor), but also reads like a textbook diagram that supplies a graphic for the universe of this work. These images function as “notes” for Rickard’s composition. 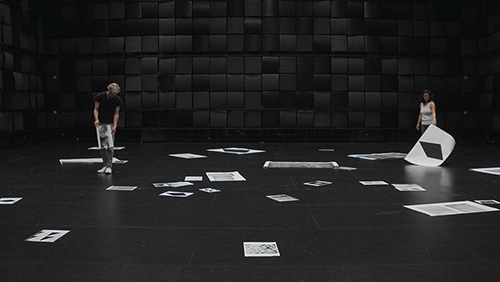 Hannah Rickards, Once can make out the surface only by placing any dark-coloured object on the ground, 2018, video still

A camera orbits the performers’ activity and follows a visual score that the Vancouver-based artist adapted from a combination of the lines and curves taken from the images in the composition. Within the space of the screening, a large print of this score is illuminated by the projection. We are privy to the map and the movement derived from these thin lines that connect the outline of geological activities and textures. Abstracted into the camera’s movements, the visual recording simultaneously captures the inherent sound of the material’s behaviour—the sound of paper slowly pulled along the ground and then dropped, each sheet folding onto and unfolding from itself, the whirring and clicking of the camera and its rig. This establishes a gateway from the site of primordial action to the stage of nascent naturalness summoned in the elements composed in the video.

Outside of the video installation room is a vitrine displaying objects that Rickards describes as “footnotes.” There are bits of fulgurite (glass formations that occur when lightning strikes sand), a sourcebook for the images that appear in the video, and artefacts of intuitive shapes alongside examples of natural photography that attempt to petrify the movement (and thus time) of things that exist outside of measured perception. The rigor of a musically notated score combined with the conceptual conditions that produce experimental and incidental sound complicate how we receive the noise and image, which feels caught, then released, to its viewer.

Hannah Rickards: One can make out the surface only by placing any dark-coloured object on the ground continues until January 13
The Polygon Gallery: https://thepolygon.ca/
The gallery is accessible.

Steffanie Ling’s essays, criticism, and art writing have been published alongside exhibitions, in print, and online in Canada, the United States, and Europe. She is an editor of Charcuterie and co-curator at VIVO Media Arts Centre. Her books are Nascar (Blank Cheque, 2016) and Cuts of Thin Meat (Spare Room, 2015). She is Akimblog’s Vancouver correspondent and can be followed on Twitter and Instagram @steffbao.