What new spiritualities could there be in a faith-testing time? One possibility can be found in Gabi Dao and geetha thurairajah’s exhibition soothsay, which promises an attempt at forming new systems of creation and belief from the debris left after intersectional collapse. 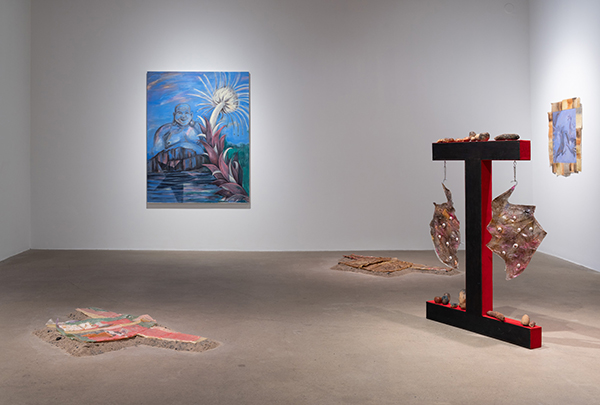 Entering Centre CLARK feels like visiting a post-apocalyptic temple or church, with thurairajah’s paintings evoking stained glass windows. This is especially true of Plebeian – tall and depicting a looming alien creature under an archway, with many of its planes demarcated by veins of gold paint. Full of ostensible symbols – stars, Buddhas, fighting doves – the smaller pieces potentially tell stories that, just as with the windows in a cathedral, are obscure to me.

While thurairajah’s paintings adorn the walls, Dao’s sculptures unabashedly occupy the floor. Despite the common themes that are eventually revealed, the two bodies of work feel more like neighbors than friends in conversation. Something about the mythological mystique of thurairajah’s work and the implied decay of Dao’s do not initially connect.

The exhibition text by Jacquelyn Zong-Li Ross explains that An alphabet burn scene: just food flesh wounds and An alphabet burn scene: debunked bat myths and eyelashes unapologetically, Dao’s two vertical sculptures amongst three supine jackets and a set of footprints, are shrines to the bat gods that shift attitudes away from more recent views of bats as plague purveyors. Letter-shaped and constructed from red and black treated wood, the “burn scenes” are furnished with offerings of mica-dusted replica produce. Spools of flypaper dangle near already-burnt incense on one, while a pair of aluminum-boned bat wings decorated with cheap cosmetics hang from meat-hooks and jewelry chains on the other. The materials suggest a resourcefulness that reminds me of my own pre-pandemic year of housebound isolation. Anything I wanted to create had to be on hand already or easily sourced. 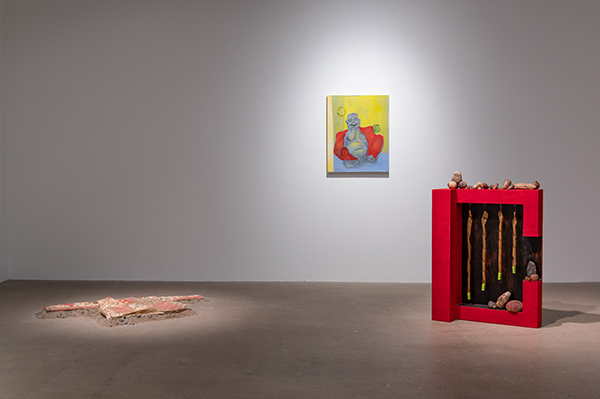 Likewise, the three coats, one titled Laying starched dandelion day job (I quit!!!), are also formed from accessible materials: tapioca starch transformed into a translucent gummy pelt, mesh produce bags, dandelions, garlic skins, and more. I can picture Dao (perhaps triumphantly) claiming surrender, outstretching their arms, and falling backwards before disintegrating into dust upon the ground’s impact. Perhaps that explains the ash mixed into the small bed of dirt each coat rests upon.

I point out to my friend how one of the coats, mainly produce bags cast into starchy leather, looks like a dystopian recreation of those colour-block button-downs I keep seeing. They laugh and say something about the “absurdity of devastation.” Out of all things at the end of the world, might we recreate a garment we once thought trendy? We chat about how humanity collectively craves a sense of normalcy, trying to somehow make new skeletons from the bones of our past. Simultaneously, I gaze at the plastic netting amongst the otherwise organic materials, realizing it will be all that remains of these jackets already caught in suspended decay.

When everything breaks down and we are left with the prospect of an entirely new world, what remains? How do we work with what’s left? And what do we choose to carry forward as we forge into the unforetold? I walked into soothsay as my life falls apart. While the exhibition could offer me no specific solutions, it at least suggests I may have some agency in rebuilding.