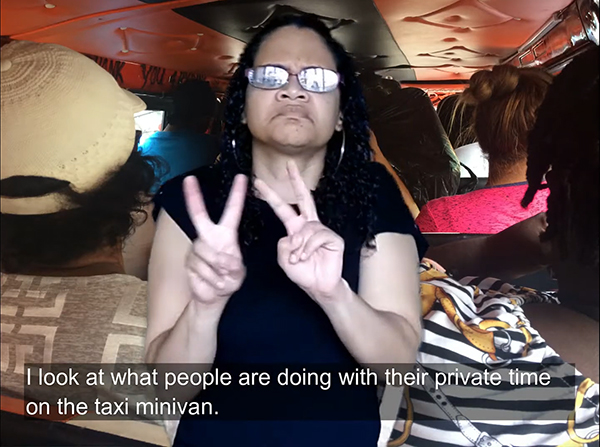 Right away, I was in awe of how stunning Guyana is! The South American country is 89% covered by pristine nature and I thought how very resourceful the land must be for all creatures. But it turned out that the political administration didn’t have the best interest in the people’s welfare. As an artist, most of my poetry works are based on social justice because my existence is affected by the system I am in. As I walked through the capital city of Georgetown, got on route taxis, and visited markets, I was overwhelmed by the heavy poverty rolling through every place. I was aware of the government corruption that stemmed from racial tensions. I captured pictures of the city, transportation, schools, and the land with some new friends for protection. I was warned not to communicate with my hands or they would know I was Deaf and this would give someone an opportunity to rape, attack, or rob me. This is where my parents came from and now I understood their suffering better. Images of people’s lives in Guyana flooded me with memories of my struggles in a dysfunctional family with domestic violence, communication barriers, and a lack of education. I poured my frustrations into the words I started to pen when I was fourteen years old.

The level of illiteracy in Deaf communities across Canada and Guyana is pretty high. I visited the David Rose School for Handicapped Children in Georgetown. It saddened me to see Deaf and hard of hearing learners in their teens who didn’t know how to spell out different colours – even RED! The Deaf teacher told me that she wrote a letter to the government asking for used computers. They promised her they would donate some, but that never happened. The level of education in Deaf classes was far below that of hearing students. In Canada, the education in Deaf settings is also not equal to hearing classes because most teachers for Deaf and hard of hearing students are hearing and they graduated post-secondary schools with no prior knowledge of American Sign Language and Deaf culture. 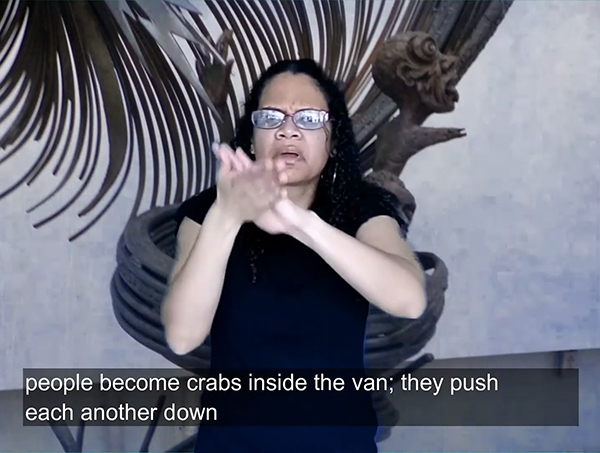 The roots of the problem date back to 1880 and a conference on Deaf education in Milan. Oralist proponents voted to ban the use of manual (sign) education and sign languages were removed from Deaf schools all over the world. Before this, we had a lot of successful Deaf politicians, lawyers, educators, writers, and artists. And all of them used sign language! The quality of education for Deaf people declined until the 1950s when sign language was re-introduced because oralism didn’t improve Deaf learners’ literacy skills. Consequently, a large percent of Deaf high school graduates still leave with low level literacy skills that lead them to face many challenges in mainstream society. From 1980 to 1999, as a young person, I witnessed Deaf people attend Gallaudet University in Washington, DC, or the National Technical Institute for the Deaf in Rochester, NY, to improve their literacy and acquire new job skills. When they graduated, many of them remained in the United States since there were job opportunities that welcomed Deaf people. Canada lost skilled Deaf workers to America, and that is why there are few Deaf professionals residing in Canada. The Deaf community here struggles to grow its own resources due to this lack of skilled Deaf professionals.

My application for Gallaudet University was accepted and they issued me a visa so I could reside in the US for four or five years. With support from the Ontario Student Assistance Plan, I paid tuition fees and travel expenses. However, I didn’t complete my sociology major and left at the end of third year. Luckily, I still had money left to pay off the OSAP debt immediately. However, I still had to pay the third year tuition fee to a collection agency for two years. After that, I enrolled in the Community Worker Program at George Brown College for two years and graduated on the Dean’s List. Since 2006, I worked and volunteered at different hearing social services as a Deaf advocate. I facilitated workshops on Deaf culture, Deaf accessibilities, Gender-based domestic violence against Deaf women, and building audits for accessibilities. I also taught ASL lessons. 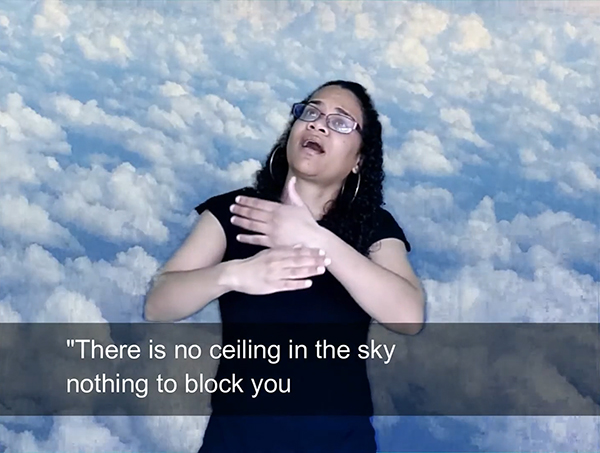 In 2015, the curator of the Disability Arts Showcase: Crip Magic and Revolutionary Love! asked me to share two of my poems for their event at Chester subway station. From that point on, art opportunities were offered to me. In 2018, I realized I needed to have my own profile, so I set up a website where I can post ASL poetry videos with English subtitles. By that time, I already had a used camera and a brand-new laptop, but when I got a job as an actress for Deaf That! and After the Blackout, I earned enough money to buy a brand-new tripod, two backdrop muslins, stands to support the muslin, lights, a drone, and other equipment. Now I can produce my own ASL videos. A high level of unemployment in the Deaf community still exists, so I saved up money to hire Deaf artists for my poetry videos.

I decided to translate my English-formatted poems into American Sign Language to prove to the world that ASL is an actual language that consists of fundamental linguistic features such as pronunciation, word formation, and word order. My goal is to spread awareness of Deaf experiences with layers of other identities that have shaped my life, and to promote my talents in poetry and experimental filmmaking to find more art opportunities to support my life.

After visiting Guyana I wrote a poem titled Fly Higher that took place on the route taxi because that was where I had the opportunity to observe passengers. It was like a window. I got a peek at what people were doing in their homes. Without hearing, I became an observer to analyze people, trying to detect their motives through their behaviour, their writing, their facial expressions. This is my survival tool for navigating the hearing world. I produced the video for Fly Higher to illustrate the route taxi as an oppressive system that affects all of us – socially, economically, and politically. I wanted to explain the discrimination against Deaf people that stems from policies that favor elites such as hearing folks.

Tamyka Bullen has been involved in social services for women, immigrants, youths, and the LGBTQA community for many years. In 2015 she became involved in the theatrical world as an ASL poetry performer. In 2018, she debuted as an actress for the Sound Off Festival production Deaf That! and Judith Thompson’s play After the Blackout. She teaches ASL lessons and if you are interested to learn another language, please contact her at starrygirl45@gmail.com. She loves to craft and mingle stories, arts, poems, acting, and dance on stage, and to voice her feelings and thoughts through her hands, body language, and facial expressions. Her motto: Embrace Yourself, Show Yourself!