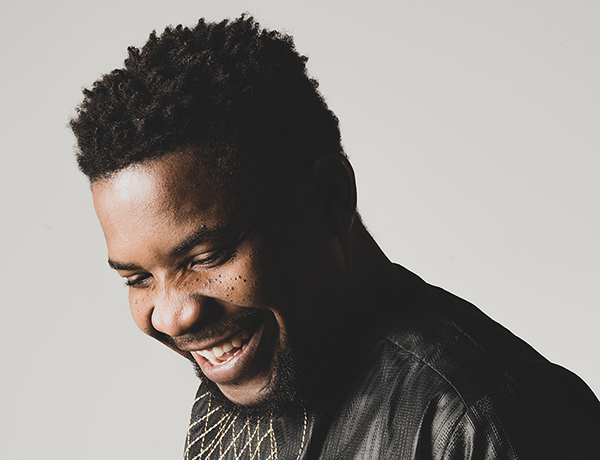 Esery Mondesir is a Haitian-born Canadian video artist and filmmaker. He was a high school teacher and a labour organizer before receiving an MFA in cinema production from York University (Toronto) in 2017. His work draws from personal and collective memory, official archives and vernacular records, and the Everyday to generate a reading of our societies from the margins. Made in collaboration with fellow members of the Haitian diaspora in Havana, Cuba and Tijuana, Mexico, his latest films have been exhibited internationally. His solo exhibition We Have Found Each Other is on view at the Art Gallery of Ontario until August 7. His work is also included in the Unbordering Migration in the Americas: Shorts Program at the Eastman Museum in Rochester, NY, on February 26.

I grew up with my paternal aunts and uncles in my grandparents’ home in Port-au-Prince, Haïti. Everyone in my family could either sing or play a musical instrument. We were all churchgoers. Though my father died when I was six years old, I ended up playing guitar, just like he did. To this day, I proudly play one of his compositions that Auntie Mirlande had memorized.

‘Music was not only in my house and at church; sounds were all around me. Sounds from the boys playing marbles and arguing with each other near my home, the girls jumping ropes and singing, the neighbours’ loud radios or the inevitable shouting match between friends and foes characterized my neighbourhood soundscape in a very memorable way. The months leading to the national carnival were the richest. Every Sunday afternoon, different carnival groups would parade in front of our house on their way to the city center. These groups were called bann a pye or bands on foot because they would stroll from one end of the neighbourhood to the other. Although I was not allowed to participate in these festivities as a churchgoer, I carry with me, still today, the memory of that time of pure joy and excitement.

Esery Mondesir, What Happens to a Dream Deferred, 2020, excerpt

Last year, Canada – and the world – lost Raymond Murray Schafer, the prominent writer, musician and educator known for his research around acoustic ecology. In my own work, I try to follow Schafer’s advice to listen! Often, I find that the intimacies of our world are better experienced when we let its sounds touch us: the murmur of a stream of soup joumou into a pot, the cringe of a foot hitting a chair unexpectedly, the nostalgia of a coconut cracked open on a rock.

Esery Mondesir, What Happens to a Dream Deferred, 2020, excerpt

I don’t know how I overcame my speech impediment; I had a serious stutter as a kid. Frustrated, I would stomp my left foot rhythmically on the ground when those first consonants would not come p-perfectly on time. My grandmother had learnt – maybe from her grandmother – that freshly collected rainwater was a cure; each rainfall became a trip to the pharmacy, but the joy was that I could also shower naked in my medicine.

Poetry saved my relationship to words and, later, to the image. I never looked into the scientific explanation of stuttering, but I am convinced that it has something to do with emotions such as anger, fear, and even bursts of excitement. With poetry I learned that one needed only a few words to express the most complex of emotions, so I memorized a bunch of poems. Dans une main, je tiens mon doit a l’amour; et dans l’autre mon billet pour Berlin! In one hand I hold my right to love; in the other my ticket to Berlin! I would say with Rene Despestre; aimes-moi, comme une maison qui brule, love me like a burning house, with Georges Castera. 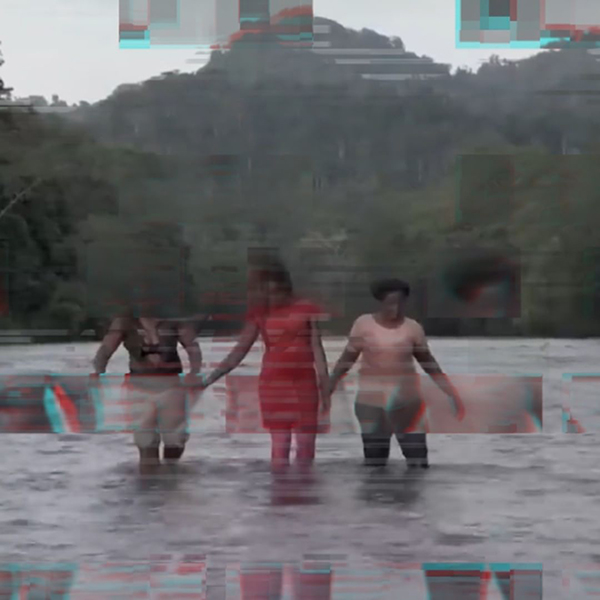 Esery Mondesir, I am Love in Motion, 2021, digital still

As Trin T. Minh Ha had taught us, poetry is not just an “estheticized practice of language”; it is about intent. I am interested in the inherent poetry of the Everyday as well as the poetics of the image to see how they can co-exist in my work. I feel intense poetic energy between the young men who met on their perilous migration route and formed a trap band; or these three women crossing the Del Rio river last year from Mexico into the US, supporting each other, in formation, the majestic mountain at their backs. Similarly, I find immense pleasure in the revelations of the hand-processed celluloid and the socially charged eloquence of the poor image. 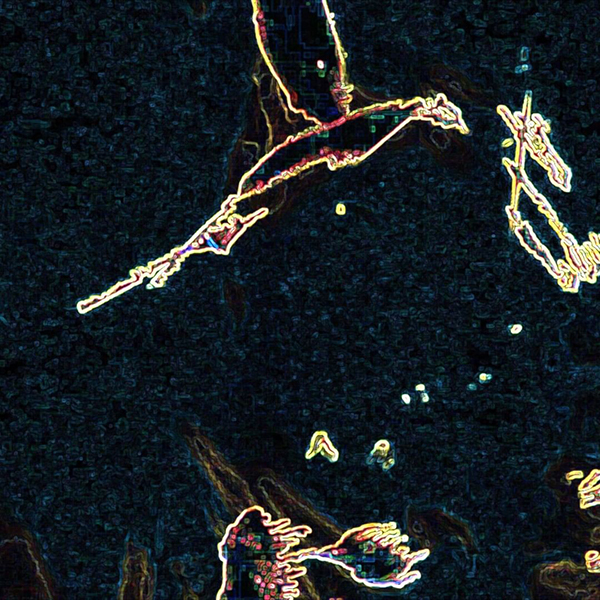 Esery Mondesir, Who Am I?, 2021, hand-processed celluloid, digitized