Sharona Franklin’s art invokes an otherworldliness. Her signature gelatin sculptures invite the viewer to become intimate with them. In this intimacy, the ethereal molds bordered with sprouts of flowers reveal another intimacy: that of living with illness and disability, and the foreign yet familiar objects of medicine. Although her work is striking from a distance, at this close proximity, it creates an experience of visual dissonance through the recognition of objects embedded within the molds. Captured in these “bioshrines” are limeflower – a botanical anti-depressant, sedative, and flu treatment – alongside instruments of the biopharmaceutical world. Franklin’s intention in bringing these seemingly disparate objects together is to highlight the tension between opposing medical practices: the Western “pharmaco-industrial complex” versus psychedelic or plant-based medicine.

Franklin’s recent exhibition at grunt gallery in Vancouver had its decomposition livestreamed from Printed Matter, Inc. in New York City. The work, one installment in a broader series named New Psychedelics, continues her exploration of healing methodologies and, with its online component, references the way sick and disabled bodies are scrutinized and surveilled.

The bioshrines on display are platformed on a papier-mâché base that resembles tree branches. Stalky golden-brown tendrils snake down to a collaged fabric mat printed with images of rats and lab equipment. If the artist’s intention was not already clear to the viewer, the iconography of the lab rat in the context of Franklin’s artist statement brings to light that which is troubled by this work: the “contradictions held for those whose treatments include both natural medicine and – sometimes ethically controversial – biopharmaceutical care.” The sculptures, filled with petals and syringes and sitting atop images of lab animals, interrogate medicine and its various therapies, while also proposing questions of ecological justice. Here are two ends of a spectrum; the constant collision of nature and culture brought into sharp comparison. The use of pharmaceutical drugs and the use of plant-based remedies is not without consequence, and at times, both rely on human mastery and the exploitation of the environment and the non-human. 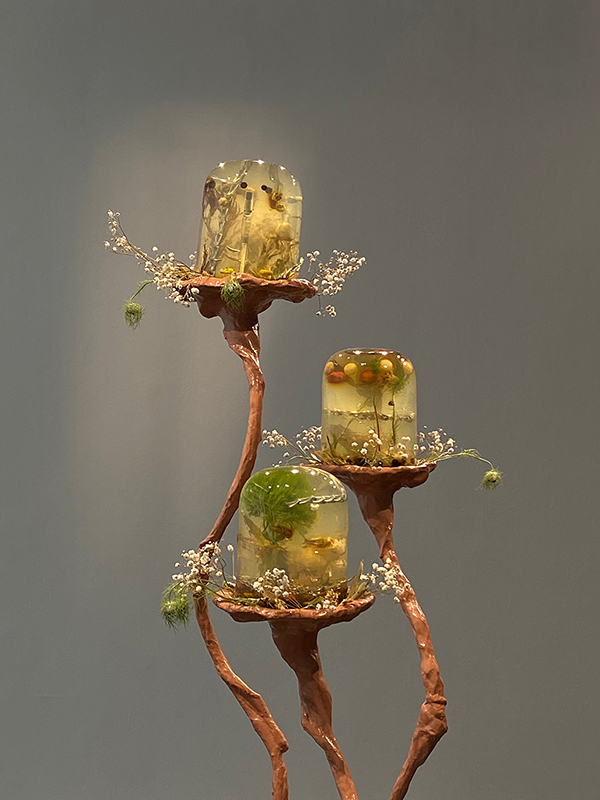 Franklin situates her work in the realm of disability art, and it brings fresh conversations to the forefront. Her practice grows from her experience living with chronic illness and disability, as well as being immersed in lush, ever-present wilderness upon moving to British Columbia for medical care. Her ongoing series of gelatin sculptures seeks to question access to both botanical and pharmaceutical medicines, as well as address the issue of exposure to biotoxins, bioharm, and complex access needs, especially in a time of hyper-neoliberalized wellness culture that often disavows the very means of survival for people living with illness or disability.

This welcome addition to the burgeoning field of disability art reaches out across coalitions to affirm a place alongside environmental justice, chronic illness advocacy, human-animal studies, and reproductive justice, to start. The work stands alone perhaps in how it deals with the idea of the body and necessarily engages with the medical model instead of outright rejecting it. Franklin brings nuance to the discourse by including the often-ignored aspect of illness in conversations about disability. Her practice brings to mind artist Johanna Hedva’s essay “Letter to a Young Doctor” where they write that as someone with chronic illness, at times all they can lay claim to is “radically temporary – a lump of painful, decaying, remembering matter whose existence is composed of different strategies for lingering.”

Franklin’s art alludes to what is painful – embodying contradictions and sometimes even surviving because of them. In this, it is the medicines developed and proven effective through rigorous and arguably unethical means, and the plants that have been harvested (or overharvested) to keep one alive, and, in both, the bodies made disposable to sustain the life of another body. 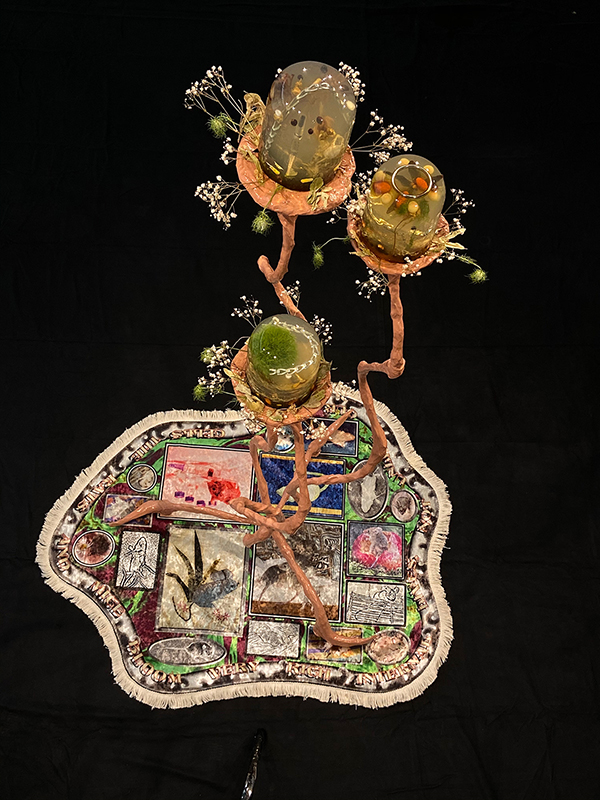 The otherworldly Limeflower Heterodoxy now becomes painfully real. How does the body survive? What choices are made? And what are the consequences of these choices? What is it to critically evaluate the means that keep us alive? Franklin expertly weaves together an embodied history of living contingent on such complex and uncomfortable questions. This is a new way of presenting disability and illness in art. It is not defiant or politically charged – at least, not at first glance. It is quietly disruptive. It pushes beyond embodied human difference to encompass the post-humanist idea of considering bodies not as that which ends at our skin, but as a collection of matter that ebbs and flows between us and our environment. Franklin’s glossy bioshrines reflect the intriguing, elusive nature of our being, revealing to us the questions that percolate in our malleable and permeable bodies. Like her sculptures, we too decompose, the particles of our being alive returned to the earth, for better or for worse.

Jen Sebring is a writer, artist, and researcher based in Winnipeg. They have an Honours BA in Women’s and Gender Studies and are currently pursuing an MSc in Community Health Science at the University of Manitoba. Jen works as a research assistant on the SSHRC-funded Bodies in Translation project, and previously was an artist-researcher in the eco-feminist collective SWARM and an intern at Plug In ICA. Jen’s interests are in disability arts and culture, illness narratives, and the nexus of illness, art, embodiment, and ecology. Jen lives with chronic illness and disability, which informs much of their work.