As part of their online offerings for 2020/2021, Tio’tia:ke/Montreal-based video art centre GIV (Groupe Intervention Video) is currently presenting two programs curated by kimura byol-nathalie lemoine: D’icitte et d’ailleurs (“here and elsewhere”) and CanAsian Experience. They were originally commissioned in 2015 for GIV’s 40th anniversary and feature work drawn from their archive by eighteen artists from across the territories of so-called Canada. Spanning twenty-five years from 1990 until 2015, all the films are made by womxn or gender queer artists, with a palpable queer aesthetic, if not outright thematic, as a solid subtext. 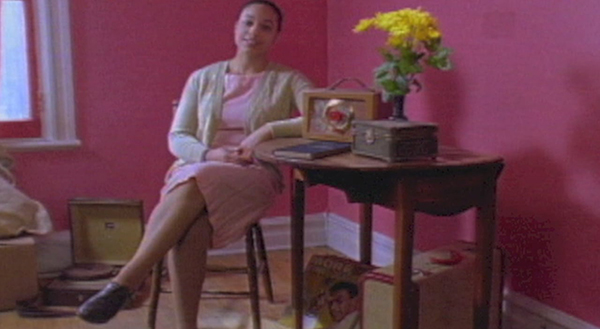 D’icitte et d’ailleurs, with its nod to a specifically Quebecois “here” in the use of the colloquial “d’icitte” (rather than simply d’ici), is a compilation of works by artists who come from both the “heres” of Quebec and Canada, but also the many diasporic “elsewheres” that define the populations of these socio-political geographies. The program opens with Une lettre de l’Australie, a charming animation from 1995 by Diane Obomsawin that sets up the dichotomy of here/there so often characterized by being in one place while fantasizing about another. Welcome to Africville by Dana Inkster from 1999 is next and easily one of my favourites of the two collections. The fifteen-minute short mixes archival footage with the constructed fiction of an intergenerational cast of characters. Anna, Dusty, Julius, and Mary grapple with life, sexuality, and the slow degradation of their home – Nova Scotia’s Africville community – that leads to its eventual demolition. The film uses simple mise-en-scene and a mix of aesthetics – including the fonts, layout, and colors of the credits, art direction, and a score by Me’Shell Ndegeocello – that hit all the right nostalgia receptors. Thirza Cuthand’s Madness in Four Actions (2008) is another mesmerizing short and quite unlike the other work I have seen by them. Using a loop of archival footage of two women who are repeatedly caught in a struggle for control as they chase and defiantly slap each other hard across the face or on the hands, a haunting soundtrack, block quotes, and running text, Cuthand succinctly outlines a social history of “madness” in North America.

The CanAsian Experience program takes the notion of “d’ailleurs” to a somewhat more specific location: the vast region bounded on the east by the Pacific Ocean, on the south by the Indian Ocean, and on the north by the Arctic Ocean. On the whole, the curation of this selection is more cohesive. All the films are really strong, but two stood out for me: Seeing Is Believing by Shauna Beharry (1991) and A Few Colourful Phrases by Cheryl Sim (1995).

The first thinks through (mixed) ancestral inheritance by taking the sari as a starting point: “Dear Leila – I made this for you so you will know / that when you wear my sari / it is not fabric you are climbing into / but / the skin of my mother.” Though dealing with highly specific aspects of ethnic identity, the video also conveys the affective quality of death and familial relationships.

Sim’s short also deals with mixed ethnicity and how it is held in the body. Through humour and 1990s television genre aesthetics including the game show, sitcom, and edutainment (think Body Break or NBC’s The More You Know), she addresses the specific forms of racism she encounters. At the height of absurdity, she recounts being asked: “Have you ever been called a banana? Allow me to explain.” A woman wearing gloves stands behind a table with several pieces of fruit and a bag of Oreo cookies. She clinically picks up and opens each one to reveal its innards as Sim’s voice cheerily guides us through the theory: “The skin of the banana is yellow, the inside of the banana is white. The same can be done with an Oreo…the same can be done with an apple…with a coconut. You get the idea,” she says in her best airline hostess voice. You know the one: sugary sweet, but laced with daggers.

Watching these programs, I had a rush of cellular memory that reminded me of being in community: sitting in uncomfortable gallery chairs at Articule and make-shift spaces in someone’s studio, or the more plush ones at Cinema Modern, watching independent cinema with the makers and our peers, talking about it together afterwards over a drink. As a hesitant Montrealer who has lived in the city off and on since 2007, it was cool to see how the archive is already a functional thing for me and my generation of cultural workers. Featuring the work of several artists I have “grown up” with in the city, D’icitte et d’ailleurs and CanAsian Experience offer a meaningful look into history while simultaneously enabling a new, refracted view of the present.