The Black Drum, a joint Soulpepper and Deaf Culture Centre production, is a historical moment for Deaf theatre in Canada. Written by Adam Pottle and directed by Mira Zuckermann (Teater Manu), this play tells the story of Joan (Dawn Jani Birley), a performing artist grieving the sudden loss of her wife Karen (Agata Wisny), who is plunged into a dark world controlled by the Minister (Bob Hiltermann). Her tattoos – a butterfly (Yan Liu) to represent beauty and a bulldog (Daniel Durant) to represent strength – mysteriously come to life in this strange land with no music, no laughter, and no happiness. Joan and a cast of characters including the dance teacher Ava (Corinna Den Dekker) and her young charges (Jaelyn Russell-Lillie, Sita Weereratne, and Abbey Jackson-Bell) must work together to undo the oppression of the Minister and his henchwoman Squib (Natasha Bacchus), and free Karen from his control. 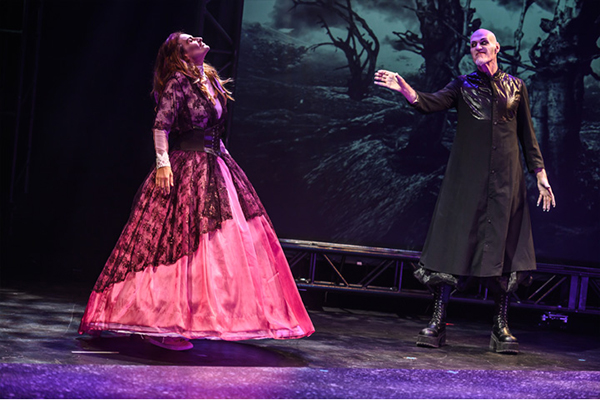 Unique in being Deaf-led from concept to production, The Black Drum assumes a Deaf world-view in every aspect of the performance. Bulldog and Butterfly are thoughtfully created symbols that represent the Deaf community – both animals commonly being Deaf. Billing itself as an ASL musical, the show employs ASL Music, a musical form of sign language with a distinct signing style, and accompaniment by drummer Dimitri Kanaris. When performed with the visual designs of Chris Malkowski (lighting designer) and Laura Warren (projection designer), the songs become a stunning centerpiece of the production. Butterfly’s No Cocoon Can Hold Me is expertly lit to represent her struggle between being held in her cocoon and being free to express her whole self out in the world. Joan’s What is Music is a glorious sensual experience melding projection art and signed music as she describes how for her music is felt in her sensory experience of the world, bringing the audience to a night filled with thousands of stars or plunging us deep into a body of water. These are intense experiences that reverberate long after the show ends.

To appeal to an audience beyond the Deaf community, several access features are interwoven into the performance. A spoken synopsis of each scene is shared and available in the program. Each actor works hard to pull out the central emotions of each scene so they can be understood in areas where the content may be less clear to a non-signing audience. However, in many instances this reduces the depth that the characters are permitted to show and can make changes in their emotional experiences feel contrived rather than a result of natural growth in their journeys. This can leave the plot, even in the dystopian setting, feeling simplistic and unrealistic at times. The character of Squib was one welcome exception. In a committed portrayal of loyalty to the Minister, her statement “It’s all about survival.” shows a depth of understanding of her role in this universe that seems to elude most of the other characters. That said, one thing I appreciated is the nuanced depiction of oppression: even though Joan and her friends may have defeated the Minister, the ideas he represents are never completely gone from our lives. The shadow of oppression will always appear once again. 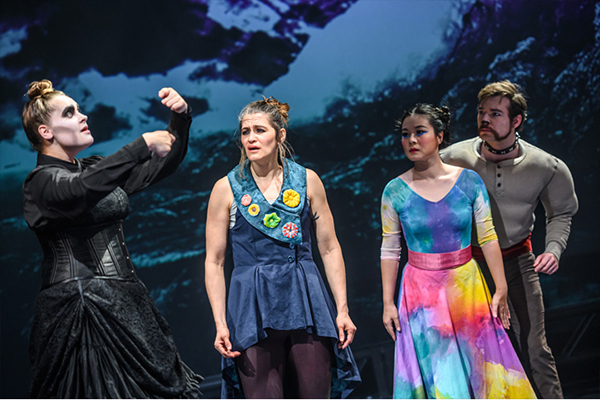 Those who have followed the Deaf Culture Center over the last decade will recognize the incremental work that has built towards this production and has drawn on recent innovations from the Deaf community. Several years ago, they hosted an exhibit on lead ballet instructor Jeffrey Baker’s Baker Light Integrated Star System. Using lights in an array to communicate the various basic positions and sequences of ballet, BLISS was a key part of training the young ballet dancers in the show (who are all students of the E.C. Drury School for the Deaf in Milton). The Black Drum benefits from the Deaf Culture Centre’s years of engagement in artistic innovation in the Deaf community. Watching the dancers transformation from militant drill-style dance to fluid and enthusiastic ballerinas was a highlight of the performance.

While The Black Drum should be celebrated for all that it is, I can’t help but feel disappointed for what it isn’t. I long for a day when Deaf theatre isn’t so rarely produced that we get to see nuanced stories that represent the complexity of Deaf intersectional lives. The relationship between Joan and Karen felt inauthentic to my own queer experience and their reunification kiss in particular felt as though it was designed to be a talking point rather than a meaningful emotional experience for the characters. It seemed like their relationship was included to reflect the desire to see a more diverse experience on stage rather than designed with input from the queer Deaf community. 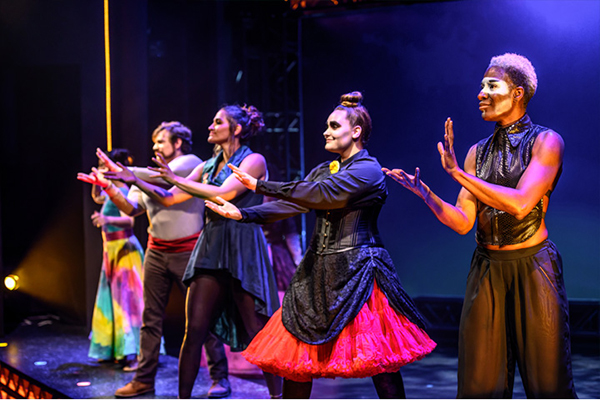 While recognizing that this is the first time that such a work has been produced in Canada and it is likely to contain many mainstream theatre tropes borrowed from the hearing world, it was also discouraging to see such a cavalier and substantial use of violence against women employed as a major plot point. I would challenge the creators to think of alternate ways that the depth of despair under the Minister’s control could be shown without multiple instances of seeing women hit and experiencing violence on stage. Since recent statistics indicate that 80% or more of the Deaf and disabled community has experienced abuse in their lifetime, it is important to consider whether the audience needs to be exposed to such potentially triggering material.

Overall, The Black Drum is a step forward for the future of Deaf theatre in Canada and the world. It clearly demonstrates the kind of productions that are possible with artistic investment and resources given to a Deaf-led production team and proves that Deaf-led theatre is a worthwhile pursuit for all Canadians. Furthermore, and most importantly, The Black Drum is evidence that a future in every aspect of theatre from conception to dancer to director is possible for Deaf Canadians.

Shay Erlich is a wheelchair dancer, community practitioner, and performance art critic. They have recently co-founded the Cyborg Circus Project (a disability led dance and circus company) with their partner Jenna Roy. Their writing on disability art can be found at the-wheelchair-critic.tumblr.com as well as in publications such as NOW Toronto and The Dance Current.