Early in James LeBrecht and Nicole Newnham’s documentary Crip Camp: A Disability Revolution, we see an archival conversation between a pair of long-haired young men at Camp Jened, a New York summer camp in the Catskills for disabled teens that gives the film its title. Playing mock television host, as if the two are sitting across the desk from each other on The Tonight Show rather than in front of a tight circle of other disabled campers, one of the young men asks the other a deceptively simple question: “Would you like to see handicapped people depicted as people?”

That question is also at the heart of LeBrecht and Newnham’s project. Despite its conventional filmmaking and feel-good premise – a Barack and Michelle Obama-sanctioned profile of a place that briefly housed some of the key activists behind the disability rights movement in the United States – the film offers a too uncommon form of disability representation, anchored not in typical, metaphor-laden images of disabled suffering, but authentic historical images of disabled people doing everything from lounging to flirting to organizing. Though it struggles in some of its representational aims and buckles at times under its own weighty purpose, it offers something simple but rare that mainstream portrayals of disability often lack, and that those young men might have hoped to see: images of disabled people depicted as people. 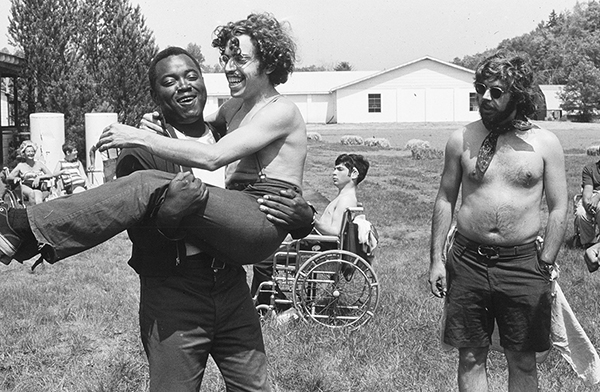 A vintage black and white film still from Crip Camp. A smiling black camp counsellor holds in his arms a smiling shirtless white young man with wire-rimmed glasses in front of a camp ground. To the right stands a shirtless bearded man wearing sunglasses. In the background numerous wheelchair users are parked in a semi-circle on the grass. (Photo: Steve Honigsbaum, courtesy: Netflix)

Crip Camp arrived on Netflix shrouded by an air of importance, as signaled by its on-the-nose use of Buffalo Springfield’s familiar activist anthem For What It’s Worth in the trailer. Shedding light on a pivotal but under-explored moment of agitation and change, the film’s goals are unmistakably lofty. It links the dedication and activist fervour behind the 504 sit-in, a landmark 1977 protest of both the Reagan and Carter administrations’ failures to uphold Section 504 of the Rehabilitation Act, and major legislations such as the Americans with Disabilities Act in 1990, as well as ongoing disability justice work.

The filmmakers frame this macro story of political consciousness, organization, and community through a number of micro stories, tracing the protest back to a time when activists such as Judith Heumann and LeBrecht first met as campers at Camp Jened, where such future leaders formed their consciousness as disabled individuals, community members, and activists, while taking their place in the countercultural movements rollicking the nation.

Heavy as the representational burden to introduce disabled activism to the masses appears to weigh on the filmmakers, Crip Camp is most poignant when it is most specific. The filmmakers incorporate remarkable raw footage of the teens developing as both independent and interdependent emerging adults at the camp, spitballing about privacy and bodily autonomy away from their primary caregivers.

To be sure, the contemporary talking head interviews with the now adult LeBrecht, Heumann, and other former Jened campers such as Denise Sherer Jacobson contextualize the political stakes of the sit-in with respect to accessible infrastructure and public transportation, and flesh out the horrors of abusive state-run institutions such as Willowbrook. But the film comes alive as more than a series of flash-points in disability history when it looks to the unsung and the small, letting archival vignettes speak for themselves. 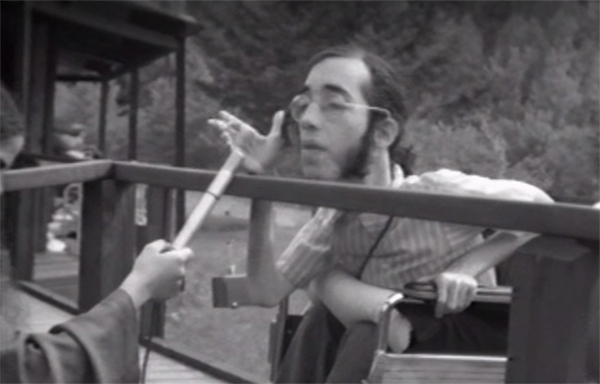 A blurry black and white film still from Crip Camp. Featuring Al Levy, a male wheelchair user with round wire-rim glasses and long hair, laconically leaning against a wooden bannister in front of a leafy camp ground, waving his hand and speaking into a microphone being held up by a person’s hand. (Courtesy: Netflix)

Consider a powerful early moment that seems to have come from the same impromptu documentary shoot as that opening conversation. Campers with a wide variety of disabilities seize the mic and address the camera, giving their names and telling a prospective audience where they are from. One camper named Carl, who self-identifies as blind and hard-of-hearing, sets the representational stakes of these seemingly minor profiles. Listing his phone number on the off-chance that this footage might some day be “broadcast on television,” he reaches out to introduce himself – presumably unable to imagine that his humble overture to other disabled listeners might be transmitted via a global streaming service nearly fifty years later.

Such impossibly tender, hopeful moments have the feel of cracking open a utopian time capsule and finding rare images of disabled people simply living their lives. Where disabled people often struggle even to survive the dominant narratives produced about them, the film finds young men like Carl projecting themselves into the future, not even realizing their own success in doing so. 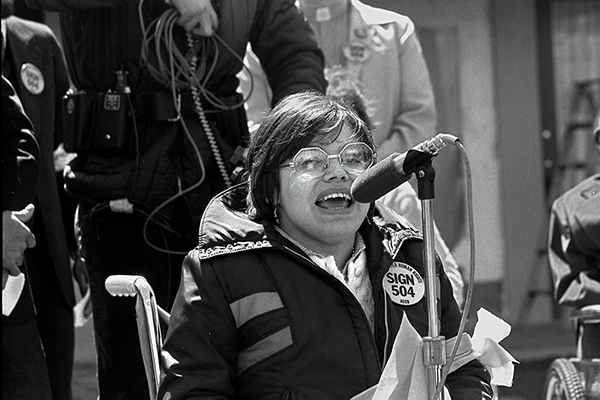 A vintage black and white film still from Crip Camp. Judy Heumann, a young woman sitting in a wheelchair, wearing geometric metal glasses and a windbreaker jacket with a sticker reading “Sign 504” on it, speaks into a microphone at a public event. (Courtesy: Netflix)

Though Crip Camp is nominally focused on the 504 protests, its early spotlight on a much more modest organizational challenge at the camp, similarly overseen by Heumann, also offers a glimpse into a rarely seen side of disabled teen culture, whether in the 1970s or today. We first see Heumann not as a presidential adviser on disability in the Obama administration, but as a Jened counsellor candidly managing an outbreak of pubic lice among a number of teenaged campers exploring their sexuality for the first time away from the prying eyes and protective bubbles of their parents. The filmmakers yield an archive of this public health blip that is no less impressive than that of the sit-ins, featuring young men and women’s frank, funny, and enlightening conversations about sexual hygiene and intimacy as well as their own self-deprecating jokes about the camp as an epicentre for both “crap cakes” and “crab power.”

Less persuasive though still necessary are the filmmaker’s occasional overtures to more intersectional politics. Throughout, the film appears to take stock of its structural lacunae in moments that address the disproportionate whiteness, straightness, and middle-class backgrounds of most of the campers given starring roles, although such acknowledgements do not quite redress the balance. An anecdote about the indispensable financial and organizational assistance provided to the protestors by the Black Panthers, for instance, feels unnecessarily truncated. A briefly glimpsed drag performance put on by one of the more vivacious campers similarly suggests other directions the film might have gone in its exploration of the camp as an incubator for sexual politics if not for its desire to maintain its mass appeal.

These moments go some way toward expanding the filmmakers’ limitations in perspective, yet their brevity and programmatic quality stands out from the more organic portraits of the campers’ youthful activism and indiscretions, which are what ultimately make the film indispensable as an archive of not just disabled activism but joy. It’s in those moments that Crip Camp delivers on the young men’s barely hoped for desire – their sarcasm tinged with yearning – in that opening interview for images of disabled people that aren’t prescriptive, hackneyed, or metaphorical, but real.

Angelo Muredda is a film critic, programmer, and PhD candidate at the University of Toronto, working on representations of disabled children in Canadian fiction and film. He is also a juror for the 2020 ReelAbilities Film Festival, currently online until May 24.