There have been rallies, demonstrations, marches, and murals painted – all activism in support of Black lives in the last month. After the killing of George Floyd in the US, and then the death of Mad Afro-Indigenous woman Regis Korchinski-Paquet in Tkaronto during a mental health “wellness check” by the Toronto Police, people have been coming together to protest and support Black lives. Regis, like so many Mad people, needed help and care during a time of crisis. Instead, she was met with a brutal police force and that interaction ultimately resulted in her death. We need an end to police involvement in our support for Mad people. This is part of a larger fight against policing in our society – exposing this institution for what it is: a racist force that regularly targets and kills Black and Indigenous, racialized, and often poor Mad, Deaf and disabled people. 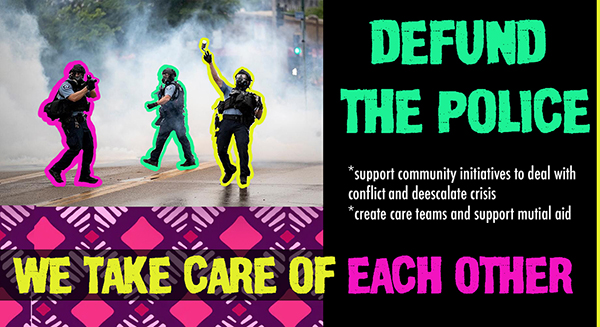 This is a revolutionary time. Revolution is not a one-time event, but rather a process of events and timelines. All over the world artists are rising up and adding their creative energies to the fight for Black lives and the fight for Indigenous sovereignty. Artists are designing posters (such as the BLMTO “Defund the Police” poster series by Camille Turner, Sandra Brewster, Elicser, Anna Jane McIntyre, Ifetayo Alabi, and Kara Springer). They are creating poems and songs (think of Keedron Harris singing “I’m a Young Black Man”). They are painting murals on city blocks so vast and on such a scale that you can see these artistic interventions from space (think here of the new mural in Kensington  Market that stretches up Augusta Avenue and that powerful image of the General Lee  statue in the US surrounded by brightly coloured spray paint denouncing the statue’s racist history and calling for Black lives to matter).

There have been widespread calls for defunding the police and for an end to white supremacy in all of our systems of power. These are the revolutionary times our ancestors dreamed of. I think of the Toni Cade Bambara quote, that the role of artists from an oppressed community is to make the revolution irresistible. And this is what we must do now through our art and actions in support of the right to protest racism. We must create work that makes change possible, that encourages people to “touch change” as Octavia Butler, mother of speculative fiction, implores us to do.

I have dedicated my life and practice to supporting activists and surrounding them with care and love to keep going in this fight for the Earth and for our children’s children to be born free. I have created an expansive Activist Love Letters project over eight years, mailing thousands of love letters from strangers to activists around the world. I have created an Activist Portrait Series that has me drawing larger than life-size portraits of organizers – sometimes as much as fifteen feet tall – as a way of honouring and revering them for their work and labour. I have created performance that is aimed at exposing white supremacy for what it is – a violent system that needs to be dismantled. As an activist, I’ve been on the frontlines for twenty-five years, organizing around abolition and prisoners justice, trans justice, disability justice, and antiracism. I am in this fight until we are all free.

Black Mad, Deaf and disabled folks have been at the forefront of this movement and are leading the charge through disability justice organizing – something the movement for Black lives is predicated on. As people all over the world cry out to defund the police and stop the brutality that they enforce on Black and Indigenous communities, it’s been important to highlight the disastrous effects of policing and prisons on Mad, Deaf, and disabled people.

The majority of Black people we read about in the news who have been killed by the police have been killed because they were Black and Mad. Their Madness was a key factor in the killings. Black and Indigenous Mad people are vulnerable to police wellness checks that often result in fatalities or forced psychiatric detention in a jail or locked ward. Wellness checks are anything but what the name implies. These are situations where someone is in psychiatric or emotional distress, and police are called to offer “support.” Armed, uniformed police officers arriving at a scene of crisis inevitably escalate the danger of the situation. Despite tons of money spent training police to support folks in psychiatric distress, when the police arrive, they often kill the Mad person within minutes of the interaction.

With Andrew Loku, the two officers who arrived were on a training shift, one training the other on the de-escalation and support of Mad people. Inexplicably, they killed Loku within twelve seconds of their initial interaction. Their fear of Madness and Blackness, their ableist white supremacy, trumped any supposed training they may have had. In the case of Regis, the result was the same. As it was for Sammy Yatin, for Edmund Yu, for Otto Vass, for Amleset Haile – the list goes on and on.

These issues are disability issues. These fights are our fights. For they are coming for us. There is such a widespread fear of Madness, of Blackness, of Indigeneity, that to be Black and Indigenous and Mad in public space is often a death sentence.

Artists have been at the forefront of supporting these movements for justice. Mad, Deaf, and disabled artists have shown up for racial justice and put their lives on the line for Black and Indigenous people to get to live, to get to be free, to get to live long enough to be elders. 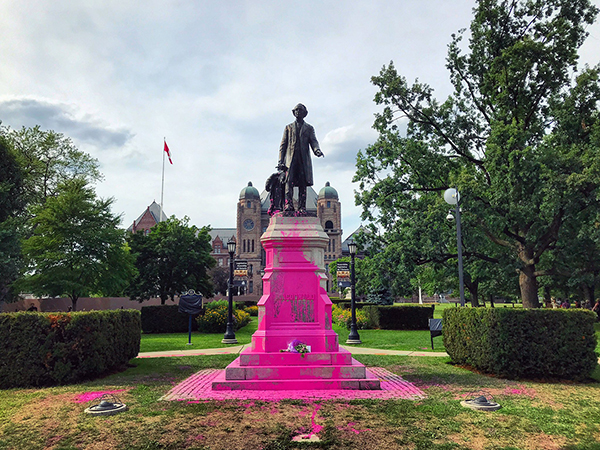 Image from recent protest in Toronto

This weekend in Tkaronto, Danielle Smith, Jenna Reid, and Dan Gooch – a disabled Black woman and a Mad queer woman and man, all artists – were arrested and held for seventeen hours for attending a protest against racism. Artists had gathered to denounce the statues and symbols of racism and colonialism spread across the city, tying these hideous monuments of slavery and colonialism to perhaps the largest of all of these monuments: the police and prison system in Canada. Artists are particularly attuned to the symbolism of monuments, and all over Turtle Island they are responding with their art practices. In this case, artistic expression was once again criminalized, while the offense of the racist violent statue itself was disregarded.

Saneism and ableism deem certain behaviours socially dangerous, the mere act of being Mad in public space is criminalized. Artistic expression by Mad and disabled people against these violences is also criminalized.

There is an open  letter from artists across the country supporting the actions of the artists arrested for attending a peaceful protest this weekend. You can see that here: https://artistsforblacklives.wordpress.com/ and sign on by emailing toartistsXforXblackXlives@gmail.com.

Syrus Marcus Ware is a Vanier Scholar, a visual artist, community activist, researcher, youth-advocate and educator. For 12 years, he was the Coordinator of the Art Gallery of Ontario Youth Program. Syrus is currently a facilitator/designer for the Cultural Leaders Lab (Toronto Arts Council & The Banff Centre). He is the inaugural artist-in-residence for Daniels Spectrum (2016/2017). Syrus is also a core-team member of Black Lives Matter Toronto.