Winnipeg’s Cluster: New Media + Integrated Arts Festival is one of many arts programs affected by the current pandemic. However, the cancellation of the original program allowed for this year’s iteration to be reimagined as a digital project, with a call for submissions for Cluster’s Digital Edition open for a single week in March. Many of the artists who were added onto the program offer timely visual, audio, and performative works, and what I think are some of the most exciting projects of the festival.

Anna Friz and Emmanuel Madan’s fifty-minute-long piece The Joy Channel is a speculative audio work that envisions a world one hundred years from now in which “business as usual” – including government corruption, resource extraction, and natural disasters – causes North America’s borders to collapse and new societies of nomads to arise. At first, radio is used as a technology to connect, until the radio waves become dominated by corporatized transmissions of emotion. The Joy Channel is one such company, monopolizing air waves throughout the continent and blocking out opportunities for nomadic individuals to connect with each other. Airspace becomes a resource, exploited to “control migrant or unruly populations.” Throughout this piece, Friz and Madan combine aspects of narrative radio plays, science fiction, and experimental sound art to comment on the history of communication and commodification of resources, questioning the roles of technology, emotion, affect, and empathy in human connection. 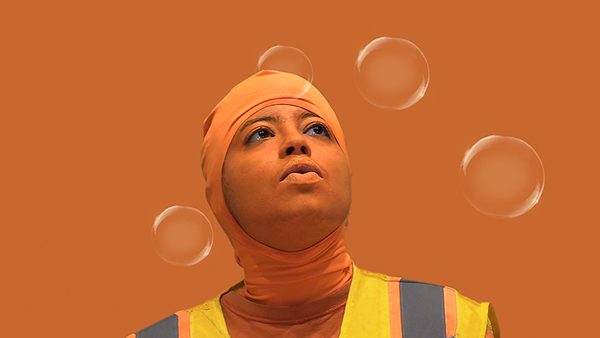 Hiba Ali’s performative video piece Abra offers relevant socio-political commentary on harmful labour practices. The artist focuses on negligence, violence, and surveillance within major corporations, which often disproportionately harm the racialized bodies whose labour they depend on. In her performance, she uses orange as a symbol of labour, painting it onto her face to transform herself from a human into an object of capitalism to be exploited. Yet even as she embodies this symbol of labour, she confronts a personification of the online retailer Amazon about this exploitation. Meanwhile, Juro Kim Feliz’s A Study in Exile, No. 4: Paagos is a complex and layered audio work that engages with themes of home, migration, displacement, surveillance, national militarization, and the imposition of borders. Abstract soundscapes meld together with interviews and poetry as the listener controls their overlapping by pushing “play” and “pause” on the individual audio tracks.

Although the curators Ashley Au, Luke Nickel, Eliot Britton, and Heidi Ouelette’s move to adjust the festival to a digital project this year resulted in a very different program than originally planned, the Digital Edition offers a variety of stimulating contemporary sound and art works on a playful online platform.