The AGO had already announced it was shutting down and more galleries would soon follow suit, so I made a pilgrimage to Paul Petro to see Carol Wainio’s exhibition before it closes on Saturday and before all exhibitions in the city are declared off limits or, at the very least, accessible only by appointment. At a time when science provides no comfort and my anxiety about the fragile state of humanity (not simply its physical health, but its economic and social stability) grows daily, I can only find solace, comfort, and reassurance in the humanities. I look to history to know that we’ve survived crises like these in the past, and I look to art to give me something to live for, something to give me hope, something to distract me from the immediate concerns of mundane mortals by giving me a glimpse of that which transcends the everyday. In other words, I wanted to look at great art. 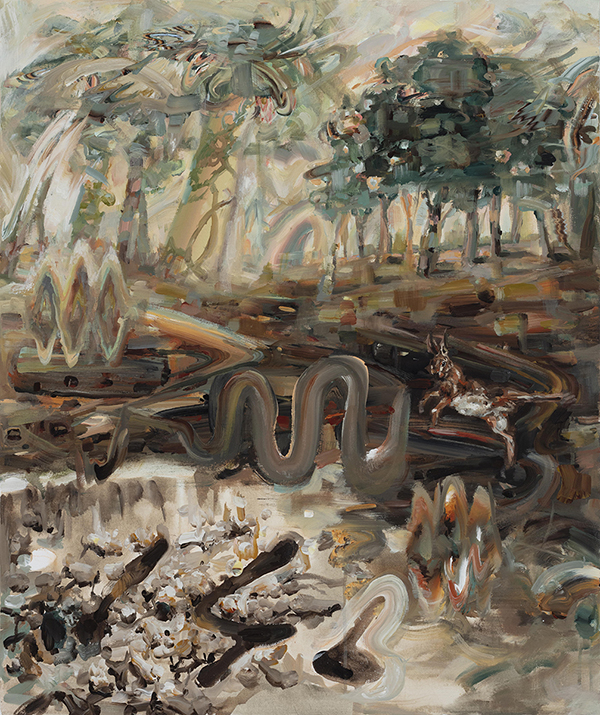 If pressed, I would say Wainio is one of the best painters of her generation. And if I had deep enough pockets, I would snap up one of her huge canvases in a second. She is an artist who can win over skeptics with her combination of technical ability and generosity of imagination, while also meeting the standard of arbiters of taste through that same high level of skill in service of a rigorous and ambitious intellect. I love talking about her works as much as I love looking at them because they give me a chance to show movement (parts of the paintings visibly vibrate and swirl), depth (you have to resist the urge to step into her forests), and layers (best seen in the incongruous, yet somehow fluid, meeting of different styles of representation on one canvas in one scene). 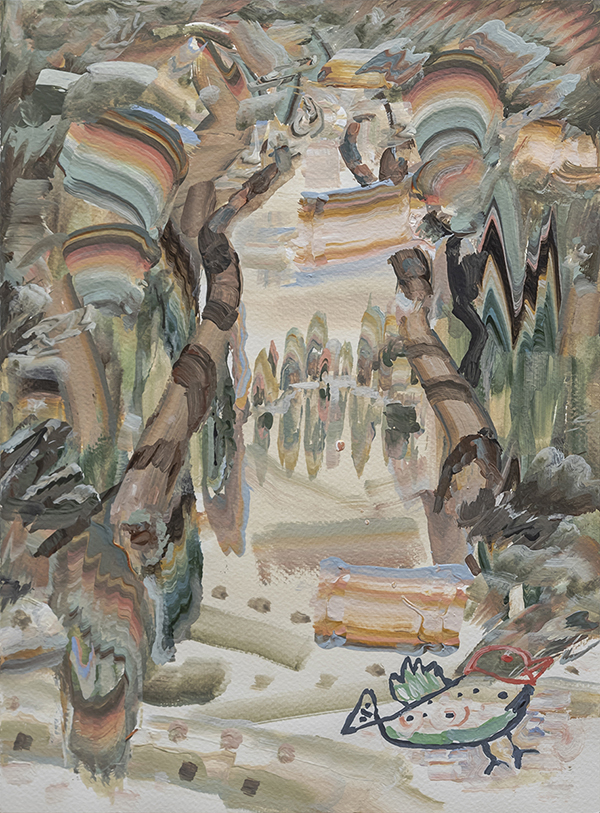 The majority of the works in this particular exhibition are inspired by the story of the tortoise and the hare. In addition to their status as featured in Aesop’s Fables, this iconic paring of antipodal beasts finds easy parallels in attitudes toward contemporary economics and the environment. Being based in Ottawa must have had some impact on Wainio over the years, but the hint of political subtext is only one among a plethora of possible associations drawn from this collection of variations on a theme.

The movement I mentioned before, where nothing on the canvas feels settled and hidden areas quiver from the corner of your eye, creates a perception of flux – the great uncertainty that leaves philosophers pining for an epistemological anchor while they secretly adore the chaos that is their bread and butter. I could quite easily imagine living with a painting like Watcher, because I know I would always find something new within its borders. I would never run out of puzzle to discern. I would never stop delighting in discovery.

Maybe it’s the pandemic happening all around us, but I must confess I feel somewhat embarrassed to be so self-involved with art while the world falls apart. Is it selfish to want to self-isolate with a painting for company? I’ve spent much of the last week trying to find perspective now that all that was routine has taken a backseat to hourly updates on a situation that progresses from bad to worse. I still secretly cling to my memories of last Saturday and my short visit to the gallery. It’s important, I tell myself, to have something that brings you joy and makes the uncertainty less devastating. It’s also essential to be reminded of the wonder of creation when the fear of death is getting most of the airtime. The places I’ve most often found these things that keep me going are almost all shuttered for the time being (as well they should be). Some might be convinced to open their doors on request, but knowing they’re ready to reveal their riches once the coast is clear might be enough to get us through this time of dread.