The uncanny nature of Bridget Moser’s newest video, My Crops Are Dying But My Body Persists, is well acknowledged by Remai Modern associate curator Troy Gronsdahl when he points to lines within it like: “We are living on this meaningless island and I think it is getting sick.” Yet Moser’s astute observations began long before COVID-19 and its associated catchwords like social distancing had spread.  Her physical proximity has always been an affective critique of capitalism and an equal examination of its attendants: whiteness and misogyny. These serve as the drivers of her comedic performances that ring funny/not funny depending on where you sit within the joke. Moser activates that destabilization in a determinedly feminist way. 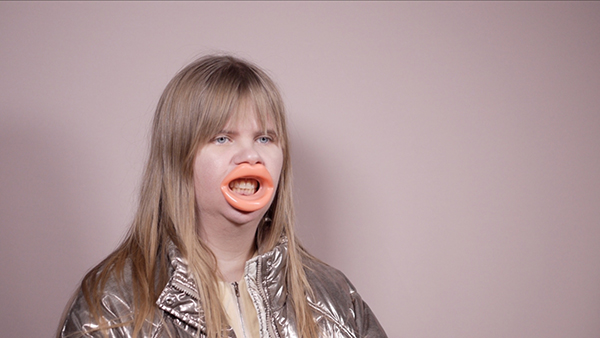 Bridget Moser, My Crops Are Dying But My Body Persists, 2020, video

In his 2008 essay All of a Sudden, Jörg Heiser channels Bergson when he states that “laughter was an ambivalent reaction: relief at deviation from the norm but also a mocking reprimand to return to it.” They each pointed to how slapstick in early film was a “making fun” of a protagonist’s failure to assert mastery: “when gestures become unstuck, when unintended movements and mishaps torpedo the bourgeois individual’s controlled stasis.” Moser is always in control of her mishaps, though she maintains the gesture as unstuck, unable to complete, a failure.

We see this throughout the piece in her repetition of gestures made by herself, by wieners, or by decorative accessories as performers. She establishes each gesture within monochromatic fields that hold space through colour and serve to still them momentarily. But they cannot hold. Like Julia Heyward and Laurie Anderson before her, Moser’s voiceover  is “less deadpan and more trancelike,” amplifying the narcotizing effect of consumerism that her constantly panning array of objects diffract into.

In the video, blush-coloured earplugs and French-manicured fingernails, like so much sand on a beach, lead to processed foodstuffs as points of contact between sculptural stand-ins for idealized people and the images of them become interchangeable with connection. Intimacy is reserved for furniture, which is equally seductive and repulsive.

Entirely self aware, Moser’s character states: “This is where I come from, or anyways I think you can see the resemblance,” while her perfectly manicured fingers replicate the crusts of indigestible white bread with Elastoplast bandages as she attempts to keep together something best left to fail. In this moment of pandemic when we know the effects will not pertain to all people, her character’s stated desire takes on a new transparency of whiteness as it amplifies the uneven nature of this manufactured world: “I would like to feel safe, and when I say safe, what I mean is comfortable.”

Note: My Crops Are Dying But My Body Persists can be viewed online while Remai Modern is temporarily closed in an effort to help mitigate risks to the public related to the spread of COVID-19

Bridget Moser: My Crops Are Dying But My Body Persists continues until June 7.
Remai Modern: https://remaimodern.org/
The gallery is accessible, but temporarily closed.

jake moore is an artist living and working on Treaty 4 territory and the Homeland of the Métis. She recently became the Director of University of Saskatchewan Art Galleries and Collection in Saskatoon.