Born in Power at the Winnipeg Art Gallery

As I walk into the exhibition Born in Power, I hear a soft layering of voices. This sound drifts from new media works by Hagere Selam (shimby) Zegeye-Gebrehiwot, Raven Davis, and Kali Spitzer. Relationships in all their complexity are part of the foundations of these artists’ practices: vulnerability, fear, excitement, joy, compassion, love, connection, grief, empowerment, and reassurance are some of the emotions they and their collaborators share with gallery visitors. Reflecting on the hardships and the beauty in this work reminds me that at times I think to myself, “Hell is other people,” but also, “Who am I but a being in relation to everyone and everything around me? Where does the beauty of joy come from other than relation – including our relationship to ourselves?”

Certainly, a pessimistic view of relationships between oneself and others, between oneself and larger structures, is deeply informed by one’s life experiences. Born in Power includes photos and videos by Black and Indigenous non-binary and womxn artists who represent themselves and their communities in their works. Curator Jaimie Isaac takes care to note that the artworks in this exhibition are created within a “self-determined lens” in contrast to the white, cis male anthropological, colonial gaze that dominates the historical photographic and filmic narrative. Taking the camera into their own hands, Spitzer, Davis, shimby, Anique Jordan, Ella Cooper, and Meryl McMaster turn this historically colonial machine into a tool for affirmation. 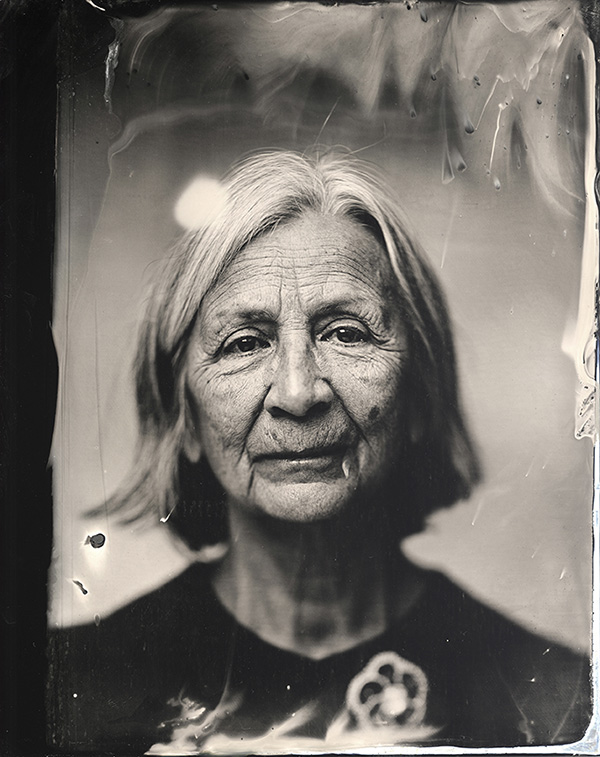 Photographs from Spitzer’s series An Exploration of Resilience and Resistance Project include enlarged tintypes of Indigenous and Black people in the artist’s community. An audio loop of responses to the project by Val Napoleon and Angel Mills, who are both represented in these photographs, accompanies the images. Napoleon speaks with some strain or frustration in her voice of the erasure of Indigenous women and the expectations placed upon them. Mills shares that they grew up within their cultural language and with support from their family and community in affirming their gender identity. They also share that being able to be their authentic self brings them happiness. 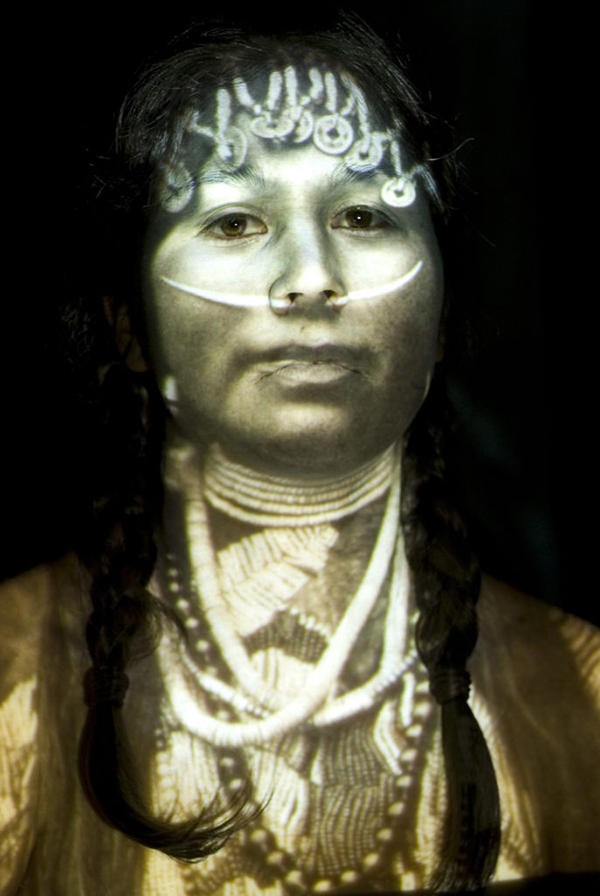 A selection of McMaster’s Ancestral photographic series communicates a spirit of reclamation and rejuvenation. Self-portraits where historical photographs of Indigenous people are projected onto the artist’s face are displayed next to Spitzer’s tintypes. Both artists reference the historicity of the camera explicitly in their processes. In McMaster’s portraits, she brings in ancestors who were photographed by outsiders acting through a primitivistic approach, desiring to document what they believed were static and disappearing cultures. Projecting these ancestral faces onto hers, she creates a link between their lives and the present, engaging with them from a place of more embodied understanding. 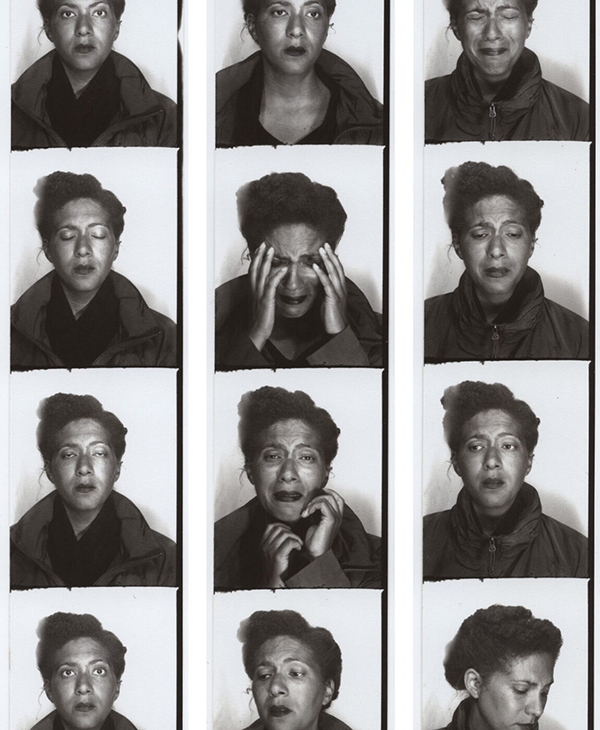 Meanwhile, in Witness, Cooper’s face takes on various emotions during a session inside a photo booth. Enlarging these images highlights the performativity possible in this act of being in front of a camera. In the context of the ongoing pandemic and ongoing racialized violence that has been exacerbated by the pandemic, Witness also raises questions of emotional safety in isolation. In contrast, her video V Formation shows strength and empowerment in community as a group of Black women stand in a mountainous landscape, engaging with the camera in poses that communicate power and pensiveness. Sometimes these women confront the lens with their gaze; other times, they look and reach out to the land around them. 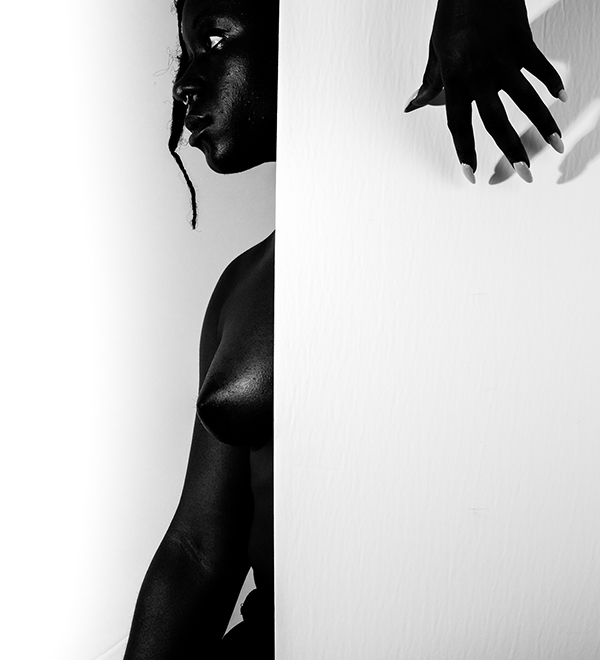 In the exhibition text, Isaac also offers questions about what it means to present this exhibition within this civic museum as a dominantly white institution. At one end of the exhibition, Jordan’s series Darkie shares the beauty the artist sees in her own body, but with some caution in the distance created by disorienting close-ups. A white background interjects with the artist’s body in some images, offering more visual distance towards the gallery visitor. It also poignantly reminds me of the whiteness and colonial practices that galleries and museums came out of. Not everyone who visits the WAG will know the history of museums as based in colonial theft and violence, presenting looted items outside of their context. Not everyone will know the oppressive role the camera has played when used to misrepresent racialized people and justify colonial conquest. A section across from Jordan’s work includes two photos from the 1950s and 1880s as well as research referencing the curatorial text. This seems to be offered as historical evidence of what it is exactly that the Born in Power artists work against in their creation of art made with the power of self-representation. For more recent artistic evidence, consider a performance staged in 2019 at the WAG by Chukwudubem Ukaigwe, Trinda Penniston, Sappfyre Mcleod, Olivier Ngugi Macharia, Emmanuel Somefun, Katelyn McIntyre, Ryan AD, and pluetoe ilunga calling attention to the lack of Black representation at this and other galleries.

Yet, as countless historical and ongoing local and global acts of discrimination and racialized violence towards Black and Indigenous people illustrate, some who encounter this exhibition may still not understand the significance of systemic erasure and violence. The audio from Davis’ video It’s Not Your Fault provides comfort through the space as the artist sings Strong Women’s Song. Beside the video, more research is presented: quotes from Black and Indigenous writers that touch on the strength of women, honouring ancestors, and the urgent need to decolonize. This urgency is reflected in It’s Not Your Fault. The video itself is emotionally difficult to engage with: hate speech by online commenters in response to the national inquiry on Missing and Murdered Indigenous Women, Girls, and Two Spirit People is displayed on the screen. Against this text is footage of Davis preparing medicine to pray with and heal, and a dedication of this energy to honour all women and Two Spirit people who are missing, murdered, or abused.

Born in Power brings together Black and Indigenous non-binary and womxn artists not solely for their shared experiences of colonial violence or racialization, but for the power in their ability to confront such systems and share insights into language, queerness, community, vulnerability, and empowerment. Hell may very well be other people when those people perpetuate violence, erasure, cultural appropriation, and harmful stereotypes against you. Ultimately, in spite of colonial erasure, to paraphrase Napoleon in Spitzer’s audio work, we must continue finding ways to create space for one another as community and as allies. Inquisitive and multidimensional, the artists in this exhibition show that this is necessary not only because of shared experiences of racialized violence, but because of the nuance and beauty we are able to see in each other, ourselves, and in the world despite the ongoing workings of oppressive colonial systems.

Mariana Muñoz Gomez is an artist, writer, and curator. She is a Latinx settler of colour based on Treaty 1 Territory in Winnipeg. Their work is concerned with language, representation, diaspora, displacement, and identity within post- and settler colonial contexts. Mariana’s recent graduate research focused on the potentiality of art and language in challenging colonial hegemonies and (re)envisioning temporality, relation, and place. Mariana works with a number of collectives including Carnation Zine and window winnipeg, and holds a Master of Arts in Cultural Studies: Curatorial Practices from the University of Winnipeg.