Had I not spent a recent Sunday traipsing through the featured exhibitions at the Royal Ontario Museum, I might not have been suitably prepared for the deep dive into bio-taxonomy and its attendant ideological extensions that are densely packed into the online portal Before Law, co-created and curated by the artistic duo Bamboat | Mitchell plus their coterie of co-conspirators. Hosted in part by Mercer Union, the website is launching December 10 at the gallery with a sold-out bird-centric performance by Oliver Husain (don’t worry, it’s also being live-streamed) followed by a party (presumably open to all) to celebrate the activation of this ambitious third of an already ambitious three-part project. 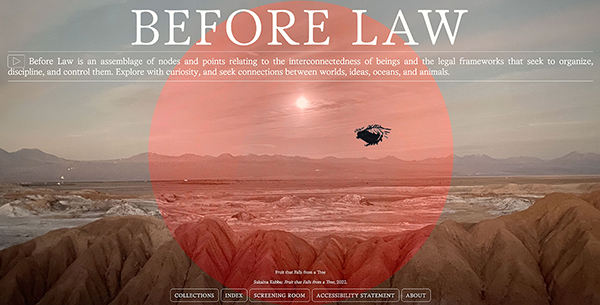 For those enamoured by the creative epistemology and bibliophilia of Jorge Luis Borges or the speculative hyper-encyclopedic efforts of Peter Greenaway, the complex network of interlocking and cleverly indexed entries into this world wide website is a frontier ripe for exploration. The artists have infused it not only with a consideration for the human impulse for classification, but acknowledged the way in which systems of power inescapably determine the resulting relations, and then interrogate the status of those hierarchies. 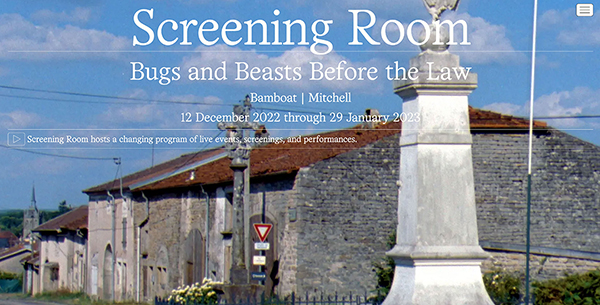 The opening gambit of this whole enterprise is Bamboat | Mitchell’s 2019 film Bugs and Beast Before the Law, which looks at the history of actual legal trials of non-human animals. The works found in Before Law extend this investigation into the realms of post-colonialism and post-humanism. Emilia Beatriz’s video A Crossing (1698/2003) combines text, landscape footage, and sound design to recount Scotland’s colonial efforts in the Caribbean. Sarah Keenan’s essay Objects with Personality addresses ambiguities in the legal status of subjects and objects, property and personhood, by asking the question, among others, “Do ships have personalities?” 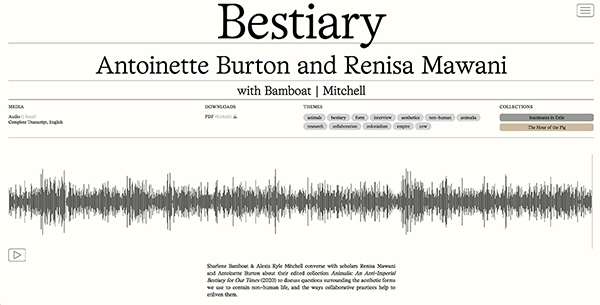 Bamboat | Mitchell, detail view of Before Law featuring an audio interview with Antoinette Burton and Renisa Mawani, 2022 (courtesy: the artists)

Non-human animals take centre stage for the most part, particularly as we humans impose and/or negotiate our relationships with them. Parastoo Anoushahpour, Faraz Anoushahpour, and Ryan Ferko contribute a video on the living weapons that are police dogs, while the artistic partnership anorak share their ongoing curatorial project Donkey, which concerns the titular animal as an encultured nexus of imposed meanings. The underlying critique inevitably drifts human-ward as we are forced to contemplate the ways in which our systems of knowledge exact a violence upon the others amongst us or in some cases eradicate them. 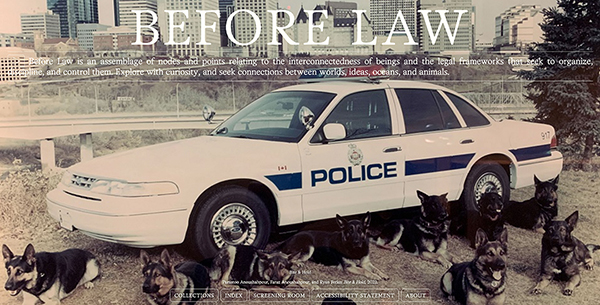 The two special exhibitions I saw at the ROM inadvertently complemented this project, which has only just been made active. One, Fantastic Beasts: The Wonder of Nature fetishizes the exoticism of colonial-era natural science through the cultural enterprise of the Harry Potter empire. The other, Kent Monkman’s Being Legendary questions the anthropological impulse by inserting an Indigenous perspective within the walls of the museum itself. The fascination of the former is appropriated by many of the artists in Before Law to draw in those of us whose obsession with obscurity and minutiae is perhaps an internalized, but doomed to fail attempt to gain mastery over the world around us. Monkman, on the other hand, complements Bamboat | Mitchell’s endeavour to get us to relinquish this desire to rule over land and beast, and instead pay heed to our place among all living things before the law and under the sun.