A Bachelor of Design graduate from the University of Alberta, Ashna Jacob primarily focuses on printmaking with a touch of intermedia and performance. Her practice broadly deals with human relationships and identity politics, with performances focusing on dependency, trust, and kindness. She is currently doing the Garage Residency at Latitude 53, exploring the potential of board games as a means of artistic research and focusing on themes of collaboration and competition. Out of the five obsessions listed below, only one is a true obsession and the reader is invited, if they care, to play a guessing game of which it is. 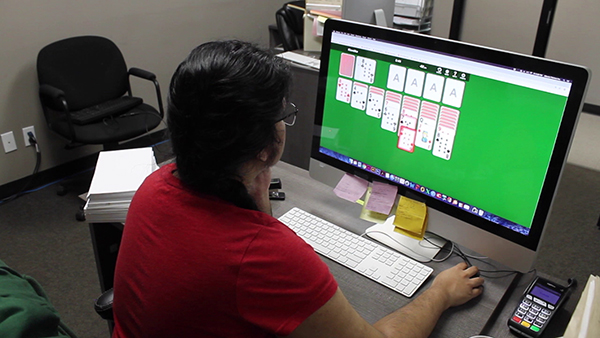 Back in the nineties, before we had an internet connection, I would spend hours playing Solitaire on our boxy computer – a habit I’ve kept alive sporadically over the years. While there are a number of other games dedicated to the solitary player, Solitaire has been more visible in popular culture over the years, especially with its computer version being a staple of bored office workers and grandparents everywhere. Another name for Solitaire is “Patience” – an apt description of gameplay. I find the concept of the unsolvable game particularly interesting because after all the “patience” and careful planning you may put into a game of Solitaire, you can still end up with a deal that was unsolvable from the start. For my residency at Latitude 53, one of the first actions I took was to set up a game of Solitaire for visitors. Every visitor is allowed only one move per visit and the game is to be played collaboratively, accepting and anticipating the moves of strangers, whether good or bad, in the true spirit of Patience.

The past year, and especially the months leading up to this year’s Pride festival, was quite tumultuous in the Edmonton LGBTQ community, especially for us QTPOC. I was fortunate to witness the beautiful way this community came together as local grassroots organizations Shades of Colour and RaricaNow organized a march at the end of June to commemorate the 50th Anniversary of the Stonewall riot, against all odds and facing opposition from the very community that should’ve supported them. I was also fortunate enough to make my first print with a “rainbow roll” while making signs for this event. I have been bewitched by how effortlessly such strong and distinct colours melt into each other, making the whole stronger and coming out as the beautiful and timeless rainbow. I feel like there’s a metaphor in there somewhere. 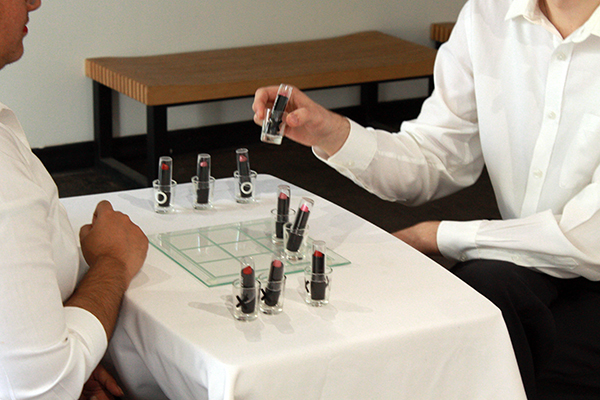 Growing up, my cousin and I would play tic-tac-toe for hours on end in her little notebook. The game is simple like rock-paper-scissors, but unlike the latter it does not depend on chance or anticipating your opponent’s next move. In tic-tac-toe, with just nine squares to fill, the first player to move usually wins, and winning is guaranteed if they follow certain steps. The second player’s only hope is to angle for a draw or wait to see if the first player forgets to use the winning technique, which happens more often the longer you play. Needless to say, as six year olds, my cousin and I retired from our tic-tac-toe championships once we began to fill entire scoreboards with ties.

Growing up, I had a very meager collection of children’s books, most of which we regrettably left behind or lost when we moved to Canada. The first few years after the move, I resisted the temptation to buy books because I could not afford them and stuck to the library. Since I was more into graphic novels and comics, it was doubly expensive and impossible to buy and store series that had multiple volumes. I allowed myself the vice of used bookstores because they were considerably cheaper. Soon I became enamoured by the old “thrift store hunt,” by the feel of yellowed pages, secretly scribbled notes, and old bus tickets stowed away between pages. Since the popularity of graphic novels has developed more recently, older volumes are extra thrilling to find in a store. My favourite find so far is a fat volume of The Heart of Thomas by Moto Hagio. 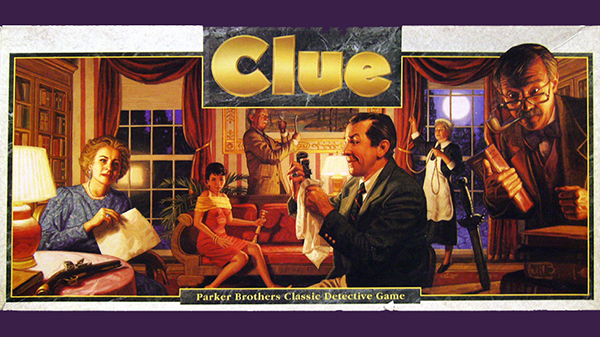 Like with most of the board games considered a classic in North American households, I did not grow up playing Clue and was introduced to it by my Indian friends who grew up here. I still haven’t wrapped my head around the strategy enough to win a game, but since revisiting it for my residency I’ve found it to embody the concepts of collaboration versus competition quite interestingly. Based on the plot of the game, the characters band together to solve the murder of a friend. The heroism is tainted with the fact that one of them is in fact the murderer. The gameplay itself is sadder because the entire group is working competitively, rarely collaborating, as if their priority is to prove their own innocence and win by pinning the murder on one of the players. If I were the murdered friend’s ghost, I would be appalled at the whole affair and haunt the entire party.