Architecture after the Asylum: Review by Shauna Jean Doherty

In the summer of 2017 I travelled to Coquitlam, British Columbia to visit Colony Farm. I wanted to see Riverview Hospital, an asylum that first opened its doors in 1913 as The Hospital for the Mind and still sits on a hill that slopes north from farmed fields. As far I knew, the facility was vacant – a stark change from its overcrowded conditions in the 1950s when more than four thousand patients inhabited its dorms and electric shock, invasive surgery, and artificial fever therapy were considered the most advanced treatments of the day. In subsequent decades, the number of occupants at Riverview dwindled and patients were limited to those who had been designated “criminally insane” by the justice system. By the turn of the century, with the increased use of pharmaceuticals and a move away from institutionalization, the facility had been deserted and became a common backdrop for episodes of The X-Files. This last detail had largely motivated my journey.

I had my Super 8 camera with me, ready to document the decaying grandeur of the monolithic Victorian structures that remained. The lawns hemmed in by old growth forest were stately and impressive, recalling a campus or country club in disrepair. Frederick Wiseman’s 1967 documentary Titicut Follies came to mind – the direct cinema film remains one of the starkest depictions of a state-run mental health facility. The transgressions of carceral psychiatry, like those recorded in Wiseman’s film, I thought, were seated safely enough in the past that I could capture the space with some artful distance. I peeked in windows, walked through the gardens, and gaped at an abandoned swing set.

As I wandered around the grounds, an official-looking gentleman approached. He asked me to leave immediately: recording devices were a violation of the hospital’s policies because they jeopardized the safety and privacy of the patients. I found, in that moment, that Riverview had become part of the Forensic Psychiatric Hospital at Colony Farm – a facility that was actively in operation, tending to patients at various stages of community reintegration.

As I descended the hill I realized I had arrived as a voyeur and left as an asshole. 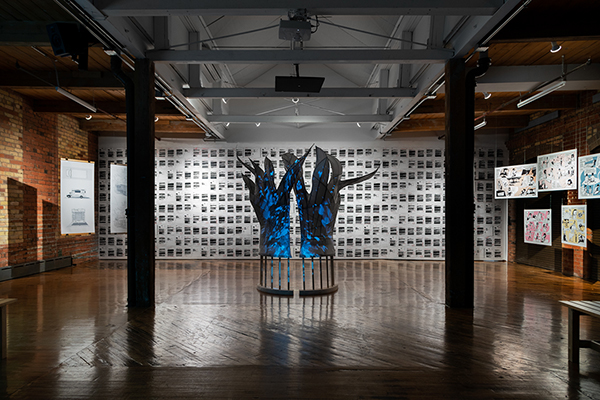 This memory resurfaced when I visited Architecture after the Asylum, Sajdeep Soomal’s latest curatorial project at Trinity Square Video. In the exhibition, artists Hannah Hull, Agata Mrozowski, Maria-Saroja Ponnambalam and Rupali Mozaria, ariella tai, and Joe Wood’s lived experiences of mental distress and wellness were on view. (Additional contributions for the exhibition were made by Kai Cheng Thom, Joshua Whitehead, and Kelly Schieder.) The works ranged from clinical to speculative and included schematic drawings, illuminated sculpture, archival documents, and video installations. They were disarmingly generous, lending a degree of personal disclosure that left me feeling as if I was perpetrating as intrusive a violation as I had that summer on the West Coast. 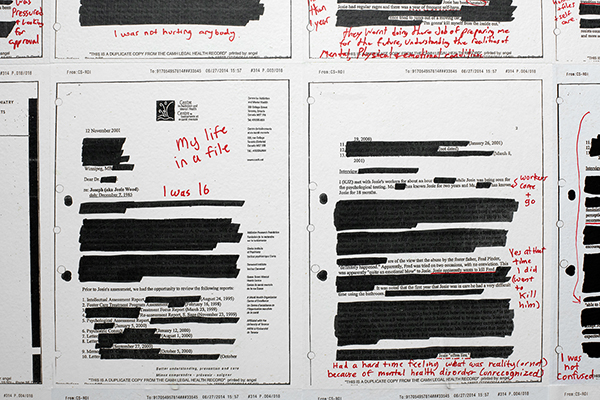 Joe Wood’s ᑯᐦᐹᑌᔨᑖᑯᓯᐃᐧᐣ | kohpâteyitâkosiwin – the act of being thought of as contemptible foregrounds this complex dynamic between a voyeuristic art viewer and an artist living in earnest in a mad world. Covering the entirety of one of the gallery’s walls are letter-size pages drawn from Wood’s file from when she was a patient at Canada’s largest mental health hospital, the Centre for Addiction and Mental Health (CAMH) in Toronto. The papers are heavily redacted and annotated with Wood’s own responses to her doctor’s analysis. Despite the black streaks that obscure the pages, when closely inspected, the original text shows through. Here the artist reclaims an agency that is absent from the original documents. The piece is presented in low light, becoming legible only through close proximity. Across from the wheat-pasted wall stands a tree sculpture also by Wood that is softly illuminated by abstract projections covering its white paper surface. According to Soomal’s exhibition essay, the tree signifies the artist’s long-standing strategy of climbing trees in order to escape, even if temporarily, from the foster homes she was shuttled to and from throughout her childhood. the act of being thought of as contemptible calls attention to the incongruity between Wood’s self-definition and the identity that has been prescribed upon her by a multitude of authorities, whether they be social workers or psychiatrists.

While navigating the exhibition I am cognizant of my position as an onlooker. I have not personally experienced challenges with my mental health. Despite this, the exhibition facilitates an open encounter that impels me to confront this perceived external position that I find myself grappling with and acknowledge my communal responsibility. By inviting everyone into the exhibition, the outsider/insider binaries of mental wellness are dismantled, while the exhibition as a whole confirms the importance of shifting the experience of mental health and forms of care out of isolation. At the same time, through its co-presentation with Workman Arts (a Toronto-based organization that has empowered artists with lived experiences of mental health and addiction issues since 1987) and the inclusion of a range of accessible and thoughtful auxiliary events and workshops, Architecture after the Asylum maintains care not to disavow the significance of individual mental health experiences. 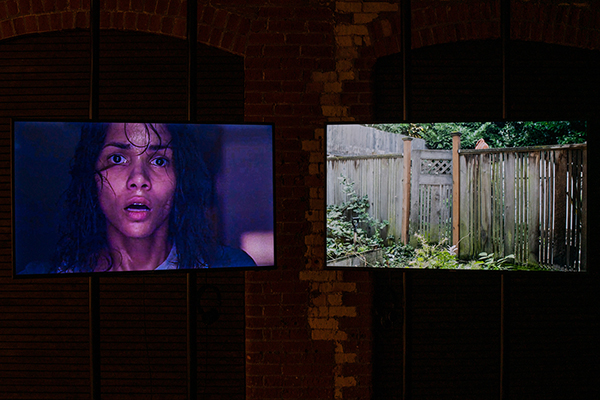 Many of the artworks in the show propose nature as a radical rebuttal to coercive approaches to mental healthcare. For instance, ariella tai depicts the healing powers of herbs in their non-narrative video safehouse ii that features tableaus of black queer and trans performers who explore wellness through ethereal acts of gardening, cooking, and bathing together. 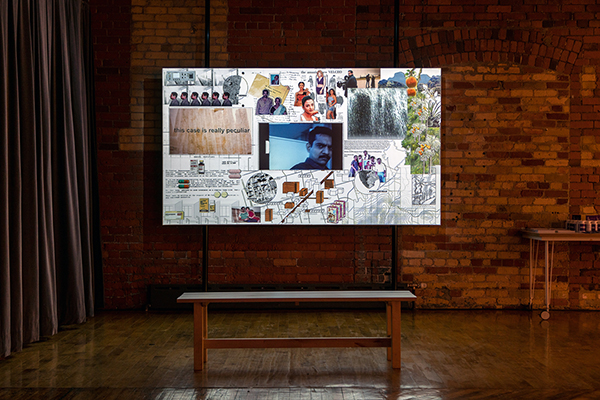 Natural forms of care are also represented in Maria-Saroja Ponnambalam and Rupali Mozaria’s film How We Cared amid a montage of family home videos, images of Indian celebrity culture, scenes of an urban landscape, and a recorded reflection of a young man. 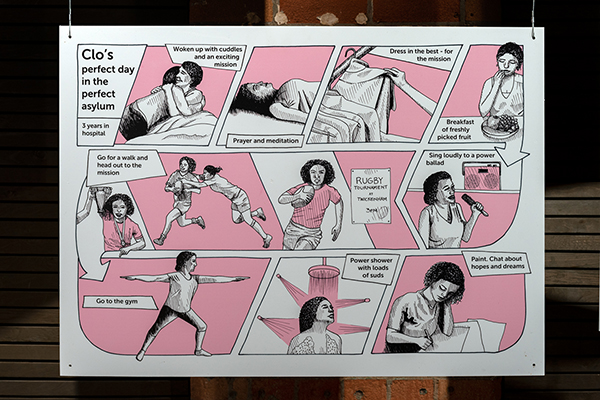 Nature walks, pets, and houseplants emerge as mainstays of the ideal psychiatric wards imagined by Hannah Hull’s collaborators in Madlove: A Designer Asylum. Joe Wood’s tree sculpture similarly points to the outdoors as an escape from institutionalization. And the outdoors serve as a complex backdrop for survival, autonomy, and rest in a schematic drawing of a custom-designed and built encampment in the work The Right to Sleep, facilitated by landscape architect Agata Mrozowski. The natural environment is consistently turned to as the material antithesis to institutional confinement.

I consider here the work that has been carried out to mount this exhibition, both personal and private – the artists juggling the various roles in their lives that are assigned to and determined by them, the gallery staff who contributed to the installation of the artworks, and the community of people that have helped to make these endeavors possible. The exhibition’s thoughtful layout, sleek catalogue, and community-oriented workshops are evidence of the deep sense of care that undergirds Soomal’s curatorial practice. They’ve gone so far as to stock the exhibition with pill bottles filled, not with pharmaceuticals, but with small snacks that can be enjoyed on the spot or taken away by gallery visitors.

As I consider the efforts of the artists and this gallery as a positive and supportive space for the experience and expression of mental wellness and challenges, I think alternatively of the history of mistreatment of individuals living with mental illness. Part of this dark history involves over a century of patient labour. Patients built the wall that still surrounds CAMH back in 1850 when the facility was named the Provincial Lunatic Asylum. Since then, that wall has been divided, as a signal of the institution’s progress. A plaque sits on Shaw St. in Toronto beside an unused greenhouse on the CAMH property, recognizing the female patients who darned and laundered for no pay throughout the 20th Century. Riverview Hospital also frequently called upon its patients to work on the grounds, mostly unpaid. In 1913, the Colony Farm produced seven hundred tonnes of vegetables and twenty thousand gallons of milk, enjoyed by the communities in the surrounding area. From the very beginning Riverview Hospital exploited patients through labour, enlisting them to clear and prepare the land where the hospital would be built. At that time (around 1905, after the land was purchased by the provincial government in 1904), it was believed that the main causes of mental illness were heredity, overindulgence, syphilis, and masturbation.

Riverview Hospital was also known for its pastoral tranquility, situated on a hill that overlooks the Fraser River, facing conspicuously away from urban Vancouver. In 1912, the year before the hospital officially opened, John Davidson, Provincial Botanist, established the first botanical garden and arboretum in western Canada, believing that the garden would have therapeutic effects on the patients. The greenhouse and botanical gardens are no longer maintained, but the trees that constituted the arboretum continue to grow there.

Architecture after the Asylum is presented within the context of the upcoming unveiling of CAMH’s newest facilities, which will feature a publicly accessible mental health library and almost three hundred-seat auditorium that is also open to the public. Among the amenities outlined in one of the institution’s latest press releases are rooms with windows that allow light to shine through.

Riverview Hospital is also in the midst of updating their facilities with buildings dedicated to modernizing treatments for mental health and addictions. Renovations include features with therapeutic design elements that support recovery, including plenty of windows for natural light, the presence of artwork in the rooms and hallways, and vantage points that ensure that the hospital’s famous grounds, if perhaps out of reach, are always within view.

Architecture after the Asylum was on display from January 17 to February 22, 2020
Trinity Square Video: https://www.trinitysquarevideo.com/exhibition-architecture-after-the-asylum/

Shauna Jean Doherty is a writer, educator and independent curator based in Toronto, Canada. In her work she examines historical and contemporary alliances between art and technology. She has served as Programming Coordinator at InterAccess and graduate studies instructor in the Curatorial Studies program at OCAD University. Doherty has published feature articles, exhibition reviews, and curatorial essays on a range of topics including the use of artificial intelligence in contemporary art and the associations between technology and death. Most recently, she curated Kali Yuga, which features A/V works by Tasman Richardson and is currently on view at Arsenal Contemporary Art (Montreal).