Another Crip World is Possible by Ricky Varghese & Eliza Chandler 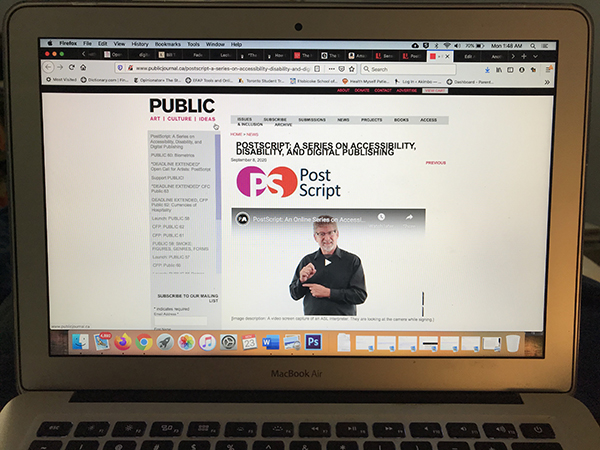 Every Friday afternoon this past October, York University’s Sensorium: Centre for Digital Arts and Technology and Public Access offered a series of online discussions on disability, accessibility, and digital publishing. Broadcast through Zoom to our living rooms and make-shift home offices, PostScript invited artists, curators, writers, technologists, and publishers to be in conversation with each other and the series’ interlocking themes. By including a diverse group of cultural producers to consider these connections, PostScript occasioned a sustained opportunity to animate the act of publishing as facilitating a relationship between the public and artwork, and between writing and research.

My (Eliza’s) colleague Dr. Ricky Varghese and myself were invited to comment on PostScript for Akimbo’s Cripsters blog from our disability and cultural studies perspectives. In pre-pandemic times, Ricky and I likely would have attended the events in this series together, exchanging our thoughts and provocations during our subway rides home from the sessions each week. Instead, we think together while writing together, following the disability studies practice of thinking-together through writing that has long been established (Frazee, Panitch, and Church, 2017; Shildrick & Price, 1999; 2005). Taking our title from Arundhati Roy’s (2003) suggestion that another world is possible, this short piece reflects on the PostScript series in the context of world-building projects we are variously engaged in.

Early on in the series, I (Eliza) facilitated a conversation between Jutta Treviranus and Liza Kim Jackson on “epistemicide” (Treviranus, 2020). The speakers took this concept up in relation to “epistemic justice” to refer to how subjected knowledges are suppressed within competitive systems – such as the university in which disabled people are often positioned as “outliers” (Treviranus, 2020). In the context of experiencing epistemicide within the institutions in which they work, the speakers considered how “crip relational praxis” could support an “epistemic re-surfacing” as well as the emergence of political subjecthood.

As I listened on in this series, I began to observe the concept of epistemicide, even if it was not explicitly named as such, appearing regularly throughout conversations to reference the position Deaf and disabled people occupy in various cultural spaces and institutions. For instance, in one of the first sessions, “Artists on Disability Art and Publishing,” facilitated by Tobaron Waxman, curator Logan MacDonald (Mi’kmaq) and artist jes sachse spoke to how arts councils silo off Deaf and disability arts from other disciplines. This kind of compartmentalizing puts Deaf and disabled artists in the potentially compromised position of having to choose between whether they want their application to be assessed by a jury of disciplinary peers or peers from their Deaf and disability cultural communities (MacDonald, 2020). Within this discussion, sachse (2020) highlighted how including Deaf and disabled people within ableist arts cultures and practices, inviting us, for example, to comment on ableism within art rather than offering to program our disability art, is an effect of the separability that MacDonald described. (The example sasche spoke to was of when, after curating a particularly ableist collection of art in its Guillermo del Toro exhibition At Home with Monsters, the Art Gallery of Ontario invited Deaf and disability artists to critique this major exhibition rather than extending a commitment to exhibiting Deaf and disability art.)

In contrast to the the idea of epistemicide, I (Ricky) began to consider what it means to think of something like epistemic humility as a way to arrive at the hoped-for site of epistemic justice. If justice is taken as a priority within how we think about questions of access, and if, as several of the PostScript conversations suggested, part of decolonial praxis is to imagine a just and accessible world, then we wonder if a kind of epistemic humility must be at play at all times when institutions consider how they must work, not with, but alongside bodies on the margins, or bodies that have historically been excluded.

In her essay, “The Bearing of Historical Consciousness,” which appeared in the journal Historical Encounters, Ann Chinnery (2019) suggests that “epistemic humility is a disposition that requires us to acknowledge our inevitable partiality and fallibility as knowers; it is a disposition related to our ability to know anything with certainty.” While Chinnery is speaking in particular to how we may approach research as it pertains to exploring Canada’s colonial past and its on-going impact on the Indigenous peoples of this country, the logic of epistemic humility could easily become a viable way to think about how institutions – funding bodies, research institutions, and publishing organizations – may work alongside Deaf and disabled artists on matters concerning expanding the idea of access.

Chinnery expands on this disposition of epistemic humility by suggesting that it “calls us to a different stance…a stance characterized not by a desire to master…but by an acknowledgement of our inescapable indebtedness to that which we can never fully know or understand, but for which we are responsible nonetheless.” What would it mean for institutions to approach “questions of access” (Titchkosky, 2011) from this perspective? First and foremost, it appears as though taking the stance of epistemic humility is a relational move, as in it appears to make a commitment toward relationality. This would mean that an institution is willing and open to engaging with Deaf and disabled artists and cultural producers in productive, generative, and perhaps oft-times difficult conversations regarding its complicity in producing barriers to access.

Institutional commitments to humility go beyond the neoliberal gesture of underscoring representative politics (though to be sure, representation admittedly has its own merits that cannot be discounted). Rather, they showcase a possible commitment that an institution can make toward engaging with marginalized artists as always already part and parcel of its vision and mandate for itself. This would require that institutions move past rhetorical commitments to inclusion – inviting those of us on the margins into an inaccessible and colonial cultural centre – and instead commit to “being differently” (Jimmy, 2020) in a way that breaks with normative cultural traditions and practices. Such a shift would mean that artists on the margins would not have to feel like they are taking a risk by speaking out or offering necessary and improvisational critiques of the very organizations that they avail themselves of support.

It is worthwhile to reflect on how Covid-19 itself has engaged all of us to reconsider necessary shifts in conceptualizing and prioritizing access and justice. For instance, returning to the experience of working on this collaborative text, we had to reimagine what it might mean to adapt to the conditions presented to us by the pandemic. As suggested earlier, in pre-Covid times, we might have met physically at the various events and discussed our thoughts and ideas on the way home, ruminating collectively on what we had just learned. Instead, we adapted ourselves by thinking-together through writing. Similarly, Sensorium and Public Access had to adapt the PostScript series. By doing so, technologies of communication, mediation, and knowledge dissemination had to be learned and applied, and access became central to how the events would be experienced. These instances of adaptation display not only a commitment to think access as a matter of utmost importance, but to think with humility when it comes to imagining otherwise regarding how knowledge may be produced and shared.

Eliza Chandler is an Assistant Professor in the School of Disability Studies at Ryerson University where she teaches and researches in the areas of disability arts, critical access studies, social movements. She leads a research program focused on disability arts and crip cultural practices. Chandler is also a practicing curator.

Ricky Varghese is an art writer and psychotherapist based in Toronto. He is also the inaugural Tanis Doe Postdoctoral Fellow in Gender, Disability, and Social Justice at Ryerson University and a candidate in training to become a psychoanalyst at the Toronto Institute of Psychoanalysis.