Anonymous Was a Woman at Clint Roenisch Gallery, Toronto

The first half of Viv Albertine’s memoir Clothes, Clothes, Clothes. Music, Music, Music. Boys, Boys, Boys. tells the story of her years in London’s nascent punk scene and her brief, but action-packed career as guitarist in the Slits. It’s your standard rock musician scenario (albeit one where the secondary characters include Vivienne Westwood, Chrissie Hynde, and Sid Vicious) and a lot of fun, but the biggest revelation comes in the second half. After the band breaks up, after a career in film and television production, after arduous attempts to get pregnant (and finally succeeding), after a harrowing battle with cancer, Albertine is a mom and a housewife in a small seaside English town, and utterly unhappy. She needs to be an artist again and I’m just at the point in the book where she’s getting up the nerve to put in the labour to reclaim that part of her identity. If you think it’s hard for a woman in her twenties to fulfill her creative dreams, that’s nothing compared to doing it in her fifties (even if she was part of a ground-breaking band thirty years earlier). 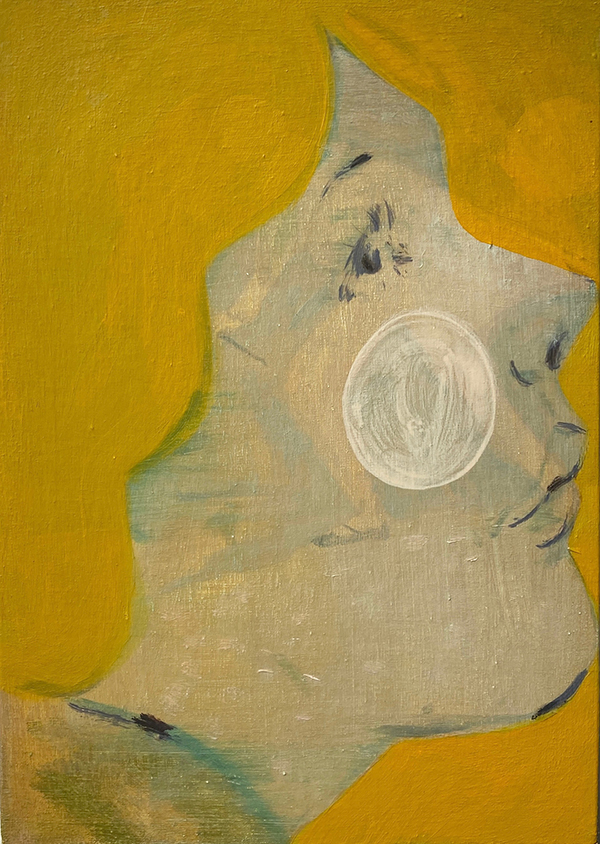 The resistance that women face in making art is the underlying inspiration for a group exhibition titled Anonymous Was a Woman, organized by Brit Pruiksma, and currently on display at Clint Roenisch Gallery. The accompanying essay by Anna Souter cites Virginia Woolf’s assertion that “a woman must have money and a room of her own” if she is to make art, and even a century later these things are not easy to come by. The challenge to find (mental and studio) space is articulated by many of the participating artists, and is often complicated by the responsibility they feel to their families. What they all agree on is the need for a sanctuary where they can commune with the materials of their practice and be alone.

At first glance, I assumed the modestly-sized canvases that line the walls were the result of lockdown-imposed limitations, but it’s more likely they reflect the restricted living/working conditions of most of the artists. There is also something about their size that suggests intimacy, but it’s one the viewer has to observe rather than share. Oversaturated portraits by Rebecca Harper and a clinical painting of a woman sleeping by Clara Adolphs maintain their distance, as does a blurry image of Woolf’s writing table by Chechu Álava. The tension between what is revealed and what is hidden is at the heart of all art, but some of these are particularly resistant to opening themselves up. 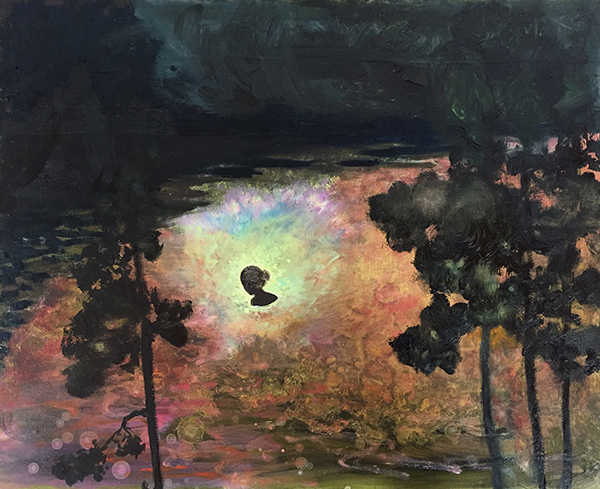 Some of the figures depicted, like Julia Adelgren’s Girl and the wispy entity carrying a flower in Mary Herbert’s pastel drawing, are at an even farther remove. The luminous halos that highlight these tiny, isolated women hint at their blessed experience, but their full story remains forever in the shadows. It’s not surprising that an artist desperate for alone-time would create works that celebrate rare moments of solitude. 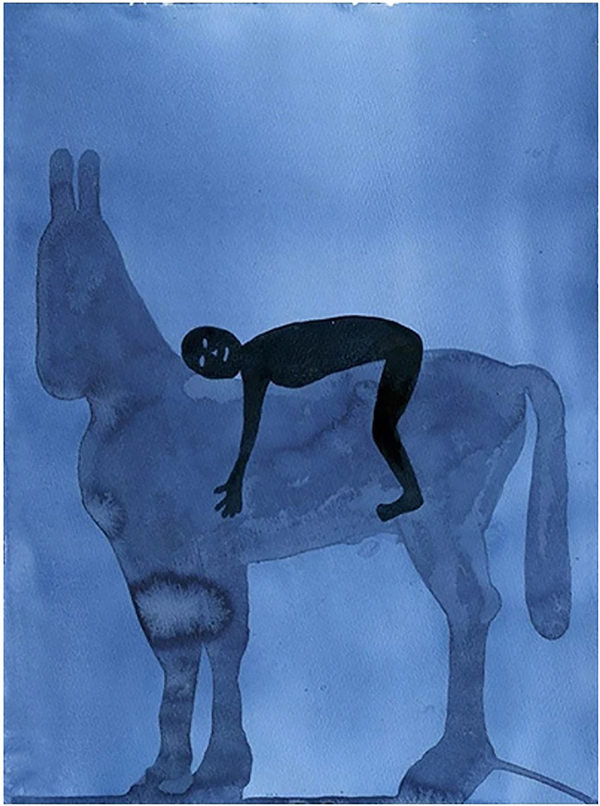 Space for reflection can also be found in nature, and a sub-set of the works depict landscapes that either portray stark arrangements of land and sky like Angela Lane’s Lunar Halo and Penny Davenport’s minimal mountains in Go On Just Listen, or crank it up to the level of raucous abstraction like Marenne Welten’s Snow or Joanne Logue’s diptych of murky marshland. Perhaps it’s my own cramped living circumstances two years into the pandemic and mid-way through the winter, but I find the most solace in the peaceful expression of the resting horse rider in Gosia Machon’s Dämmern. I fear that if I found a room of my own, my first inclination would be to take a nap. Instead, I’ve been reminded of the space for contemplation that can be found in a stolen afternoon at an art gallery now that certain restrictions have been lifted.

Anonymous Was a Woman continues until February 26.
Clint Roenisch Gallery: https://www.clintroenisch.com/
The gallery is accessible.