Create a Space: An Interview with Vera Frenkel

From the early 1970s to the present, Canadian artist Vera Frenkel has produced a body of work that continues to resonate through the years. As geopolitical, aesthetic, and technological contexts have changed, her videos, installations, and online projects have acquired new meanings and her investigations into cultural memory and the impact of media on our sense of self and community have grown in depth. While much of her work was made before her mobility was impaired, its relevance when considered through the lens of disability is not surprising. As she reveals in the following interview, difference and inclusion have been ongoing concerns of hers for half a century. 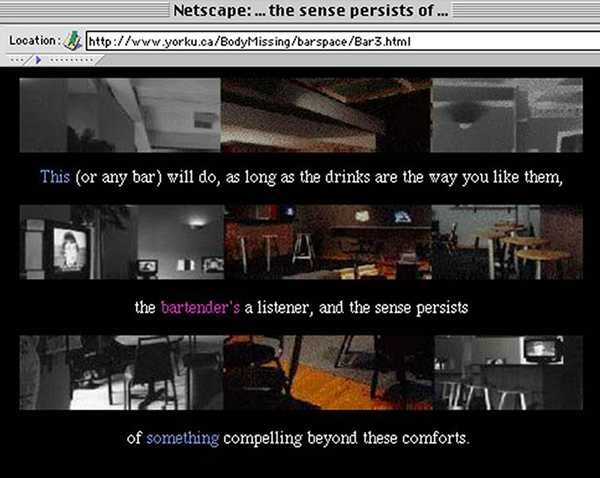 Vera Frenkel, …from the Transit Bar

Could you explain your relationship with disability?

The reason I’m disabled is that I was in a train accident. I was on my way to a residency at Queens University and VIA Rail instructed us all to stand up immediately and be near the door. The train made a really wild gesture and I was thrown. My poor hosts saw me taken off on a stretcher and I’ve been disabled ever since.

How has that impacted your work as an artist?

Disability has changed my life more than it has changed my work, because my work has always centered on some form of marginalization. So in that sense, I guess you could say I was prepared, right?

Which works in particular are you thinking of?

I had done a series of video installations on a Canadian novelist called Cornelia Lumsden. I built a whole persona and context around her, so I could deal with the various ways in which women writers were invisible. A few years later, I found myself in Austria in a cultural centre that used to be a Wehrmacht prison. It happened to be in the city where Hitler fantasized a museum in his honor, authorizing the Sonderauftrag Linz (Special Assignment Linz). I did a project there called Body Missing. The earliest version was in 1974. Since then it has traveled all over the world, from Japan to Poland to Scandinavian countries. The title Body Missing raises the kinds of questions that you’re asking me. It was a work that addressed allegorically a core aspect of World War II: the imprisonment and murder of humans. More recently I installed a version of Body Missing in the salt mine at Altaussee where Hitler’s minions had hidden most of the masterpieces intended for the Hitler museum. It is a work that has spanned half my life. My most recent project was interrupted by the pandemic. Its working title is Flute and Drum: Unheard Voices Sing. It relates to ageism and consists of seven encounters between very young children and elders ten times their age. So, when you asked about the connection between disability and my work, I thought, my God, I’ve been preparing for being disabled in some sense throughout my working life. 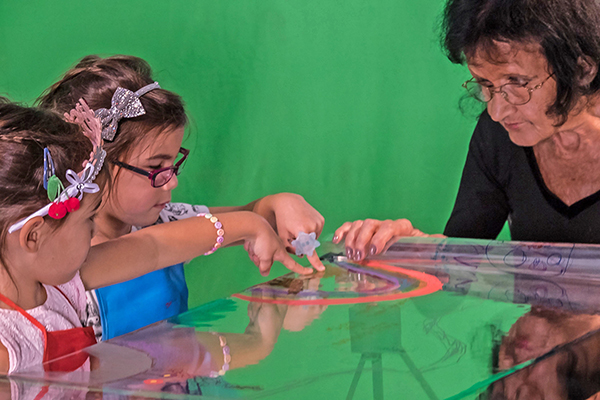 You have also dealt with mobility, in the sense that people move from place to place or are in transit, and that experience is a frequent challenge for people with disabilities.

…from the Transit Bar came about through a very conscious desire to create a space at documenta IX where people with mobility issues and various psychic challenges would feel comfortable. The interesting thing there was that it was so very difficult to persuade the director of the exhibition that this was an artwork. He fought me in every way. Fortunately, the project had the backstage support of the Kassel gallery carpenters and technicians who risked their jobs by ignoring Director Jan Hoet’s instructions to drop the piece. Only when the exhibition was over and it had been well received internationally, did he say he thought it was a good work.

It’s worth noting that well before you became disabled, your installations were accessible to a wide range of senses. They weren’t only visual. There was audio. They were haptic in that you occupied and engaged the space, and there have also been online elements.

Yes, the reason I was drawn to making multi-disciplinary installations is that I always wanted there to be an audio element and a tactile element, and also to provide intuitive permission of some kind that would allow the visitor, whatever their situation, whatever their limitations, to feel that there’s a place for them. I saw that as essential. I didn’t theorize about it. It just felt right, and that included early digital versions of the projects. 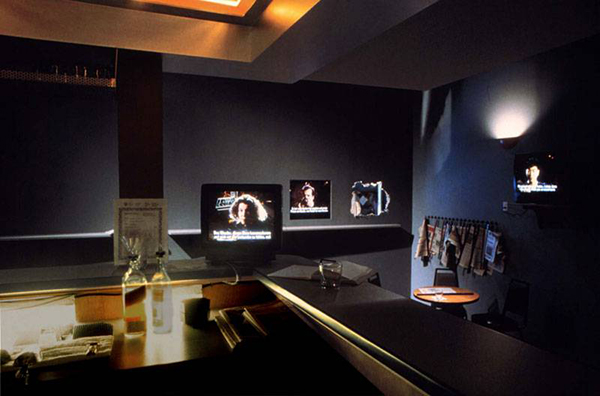 Vera Frenkel, …from the Transit Bar

Have you noticed a shift as disability has become a more prominent element in the discourse of contemporary art?

There’s a lot of thinking that needs to be done, and that may emerge from disability consciousness and the community of the disabled. It makes me think of… Well, this is a slight deflection, but I’ll come right back to where you are. I’m sure you know that they toppled the statue of Egerton Ryerson last night. Well, that made me wonder why we weren’t also toppling statues of Alexander Graham Bell. He may have invented the telephone, but his position on so-called ‘oralism’ was so visually focused that he sent his children to a school where they weren’t allowed to do any signing at all. They were punished if they were seen signing each other and even forced to sit on their hands. He favored oralism and his focus on lip reading or on the visual was a form of cruelty. And it’s not that the visual arts world is comparable, but if we’re getting rid of our heroes, he might be one to consider.

We’re at a stage where a lot of so-called universally accepted standards are being toppled or, at least, thrown into question. How does our thinking about, for example, visual impairments, change things for everyone? Does the art world need to alter the way it understands how a work of art does its work?

Well, your question, I think, answers itself. It suggests an art world that is richer and more open than it is at present.  I hope there will always be a way of expressing the deepest aspects of our consciousness through art in a less narrow way. And I think that energy will come from the insights, courage, and experiences of those artists who live with disability. I don’t think it’s going to come from the majority.

Vera Frenkel’s video Once Near Water: Notes from the Scaffolding Archive is currently included in the 13th Shanghai Biennale. She also contributed a sound piece entitled A Challenging Word and a Prescient Work that can be heard here: