Artist and curator Nanyamka (Nya) Lewis’s practice revolves around care and the cultural production that reflects the visibility of Black people, culture, and art practices. In her work creating spaces in the arts for Black people in Canada, she has made and curated projects documenting Black diasporic history and visibility in Vancouver and beyond. An Insufficient Record: The photo-ethics of preserving Black Vancouver, currently on display at grunt gallery, is based on her recent OCADU graduate thesis project. The exhibition examines the ethics surrounding how Black people in BC have historically been photographed and archived, and the realities of this biased practice that extends into the present. The strategic position of the show at this venue builds on the grunt’s practice of creating a counter-archive. Lewis brings our attention to the history of Black artists’ presence within it. 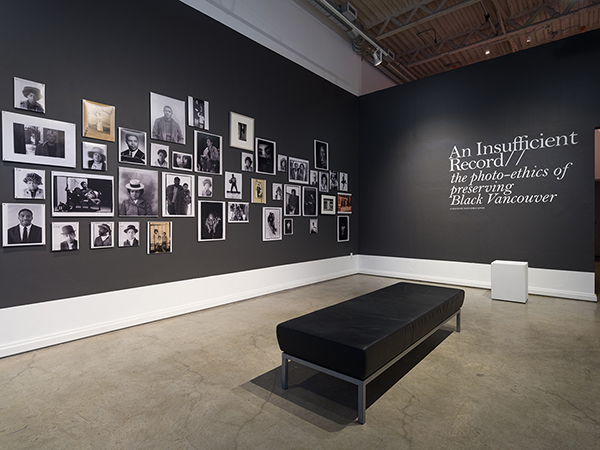 In a collection of photographs, books, pamphlets, newspapers, internet posts, and even a church record, Lewis lays bare a history of Black BC in resistance to an active institutional erasure that overlooks the settlement and movement of Black people within and out of the province. The exhibition acts as a record that might not capture all experiences of the Black diaspora, but it pieces together moments and people from the past and contemporary history of Black BC. The show positions Black people as not just a presence that has been misplaced in the archive of the city; instead, they are contributors to a history of the city in opposition to their erasure. 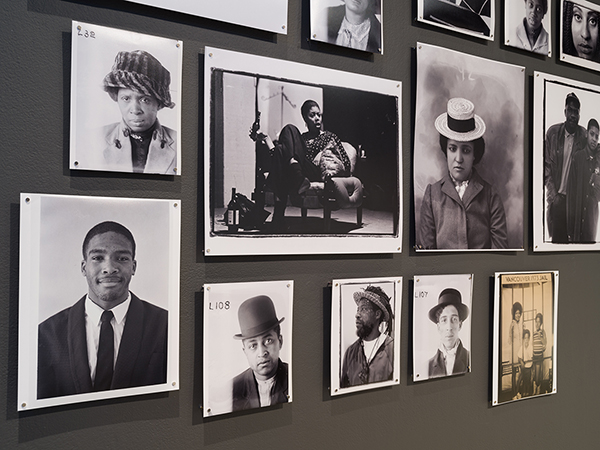 The first room of the gallery space displays a collection of vintage photographs of Black people dating back to 1898. Written documentation with references and donation records reveal a significant number of the photos were donated to the city archives by the Vancouver police department. What does it mean for the history of Black Vancouver to be overwhelmingly captured in the still frames of a mugshot, unable to speak for itself, frozen outside of a definite context? The mugshots, placed alongside photographs of everyday life, recontextualize the lens through which Black bodies are recorded and entered into archives. These images challenge the ethics of labeling Black history as reductive and criminal. The way the curated images don’t only show police records, but also other aspects of life for Black people over the years, and the intentional exposition of donation and archive credits, creates a space for agency within the curation of the images and words in the show. This agency provides a different language and cultural memory of black bodies and experiences.

The second room of the gallery presents a research collection. The documentation spread across wall after wall holds archives of place, experience, and written works of Black people in BC. Displayed on tables are publications such as magazines, books, pamphlets, and zines that discuss the art and personal experiences of Black people in BC. Some of these texts, including posters and flyers, belong to the grunt’s own archive and show the history of Black contributions to the arts and documentation of personal experiences that counter the narrative of Black people not being a part of the art history of BC.

One of the most memorable parts of the show is a copy of a church document from the Methodist Episcopal Fountain Chapel; it was the first black church in Vancouver and operated from 1918 to 1985. The document contains members’ names, their attendance records, papers showing information for sharing aid among members, and pages of sponsored greetings. This speaks to how the personal archive for Black people and communities is another site of agency where we are humanized and represented. In addition, these counter-archives oppose the ways a dominant carceral white gaze chooses to document Black bodies and experiences. Instead, Black resistance to the erasure is manifested visually and in words. Coming directly from Black people, the material evidence in this exhibition exists in opposition to the city archives and affirms the existence of Black history within the city.

An Insufficient Record: The photo-ethics of preserving Black Vancouver continues until June 18.
grunt gallery: https://grunt.ca/
The gallery is accessible.

Ogheneofegor Obuwoma is a Nigerian filmmaker, storyteller, and artist with a BFA in film and communications from Simon Fraser University. Her work explores “the personal” in relationship to her larger community and the cultural experience of being Nigerian. She is interested in African futurism and the ways we access the spirit.