In a career that spanned four decades, the artist Alootook Ipellie combined aspects of southern Canadian colonial culture with Inuit culture in a complex process that he described in a poem as “walking on both sides of an invisible border.” A retrospective exhibition at Carleton University Art Gallery takes its title from that poem, which is displayed along with other published and unpublished material by the artist to provide a well-rounded portrait of Ipellie and his achievements. Curated by Sandra Dyck, Heather Igloliorte, and Christine Lalonde, the exhibition presents selections of Ipellie’s output as an accomplished journalist, author, poet, illustrator, cartoonist, and artist from the 1970s until his death at the age of 56 in 2007. The title poem’s description of Ipellie’s process places it somewhere between a method of torture and a choreographed dance routine, and demonstrates the seriousness and sense of humor that the artist brought to his work. 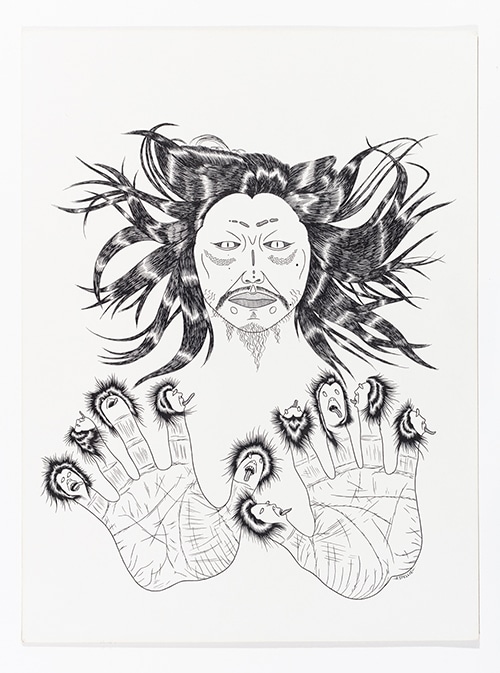 Surveying the exhibition, it would not be incorrect to say that Ipellie was a storyteller who carried on a family tradition. Born in a hunting camp near what is now known as Iqaluit, he spent his childhood on the land with his family. Ipellie was profoundly influenced by his grandfather, Inutsiaq, a renowned sculptor who shared traditional stories and myths with him. However, Ipellie’s methods of storytelling were also inspired by comic books from the south. He came to Ottawa in the late 1960s for high school, and afterwards began working as a translator for the Ottawa-based Inuit Todaymagazine, eventually becoming a full-time journalist and editor of the publication. Within its pages, he realized a childhood dream of becoming a cartoonist, contributing editorial cartoons, cover illustrations, filler drawings, and the ongoing comic strip Ice Box, which ran from 1974 to 1981. The original drawings for these and other illustrations are included in the exhibition, along with drawings for Nuna and Vut, another comic strip he produced for the Eastern Arctic newspaper the Nunatsiaq News between 1994 and 1997. Also included are posters and other materials advocating for Inuit political autonomy, land rights, and the preservation of Inuit culture. Ipellie’s spare black and white drawings have a strong graphic style and combine a comic lightness of touch with serious political issues. Moreover, they incorporate Inuit myth, including its darker elements, especially in the drawings he made for anthologies of Inuit writing and collections of his own work. 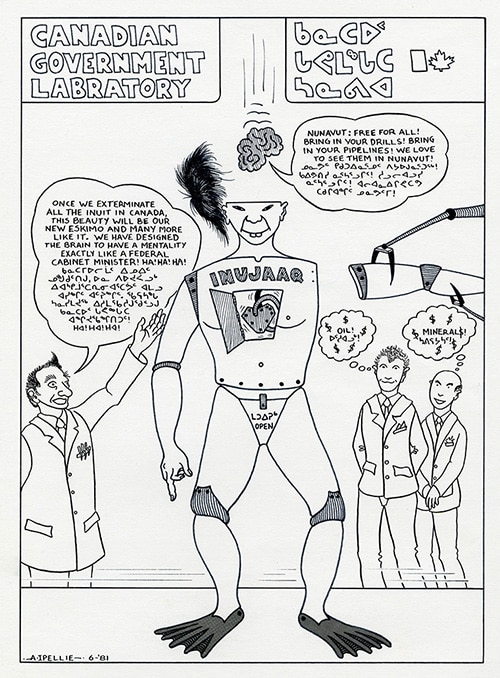 The exhibition succeeds in representing the breadth of Ipellie’s activities as a visual artist, a literary artist, and more. It fittingly spills over into a satellite exhibition in Centretown at the Manx Pub where a further selection of drawings for Nuna and Vut, curated by Danielle Printup, is on display. Ipellie did not have gallery representation or belong to a co-op, and the Manx, a hub of Ottawa’s artistic community, was one of the few places that exhibited his work in his lifetime. In a tribute on September 30, as part of the Manx’s Plan 99 reading series, Ipellie’s friends and colleagues Kateri Akiwenzie-Damm, Mosha Folger, and Armand Ruffo read selections of his poetry and reminisced about their relationships with him. Akiwenzie-Damm acknowledged that Ipellie would have been pleased by the recognition he was receiving. His work remains highly relevant and, as the exhibition tours to Iqaluit, Hamilton, Winnipeg, and Canton, New York, it is sure to reach a growing audience.