After another year of the new normal, it’s beginning to feel like unsettlement is the vibe of the moment. And while some might chafe at the changes, art lovers should always be up for the flux in their future. From shake-ups at longstanding institutions to against-all-odds emerging exhibition spaces to next gen artists to new voices here at Akimblog, the order of the day is evolution, favouring progression over stagnation. But before another year of surprises and embracing both delight and discomfort, we take one last glance at what struck us about the things on display in 2022.

Rebecca Bair, The Sun Found Me Amongst the Clouds, 2022, installation view

This past year, I have thought about experimentation, artist archives, and the importance of artist visibility in making visible their communities and the communities they serve. Before I get to the visual art, I want to mention a couple memorable plays I saw this year. The Kink in My Hair at Art’s Club Theater and Hot Brown Honey at The Cultch stuck with me as a newer theatergoer. In the galleries, it was a pleasure to see Sticky Extensions by Romi Kim in collaboration with Queer Based Media as they addressed aspects of queerness and performance that I relate to as a Queer Black person also trying to find connection with people and places in the city. All of these works felt like an act of visibility and an avenue for BIPOC and Queer artists to experiment with form, space, and story. A pair of exhibitions that encompassed my interest in experimentation were presented at the Burrard Art Foundation: The Sun Found Me Amongst the Clouds by Rebecca Bair and Aunties Holding It Together by Michelle Sound. The experimentation and connection to personal history and the body by these two fantastic artists drew me to this show. I looked in wonder at the cyanotypes created by Blair, and was fascinated by how she used her hair as a paintbrush and the visual stories that unfolded from the process. Sound’s use of personal archival images, clothing, words, and materials rooted in Indigenous culture created new images and sculptures that challenged the history of colonization through care. The experience of getting to see yourself and art in new ways around the city was the most exciting part of the year. 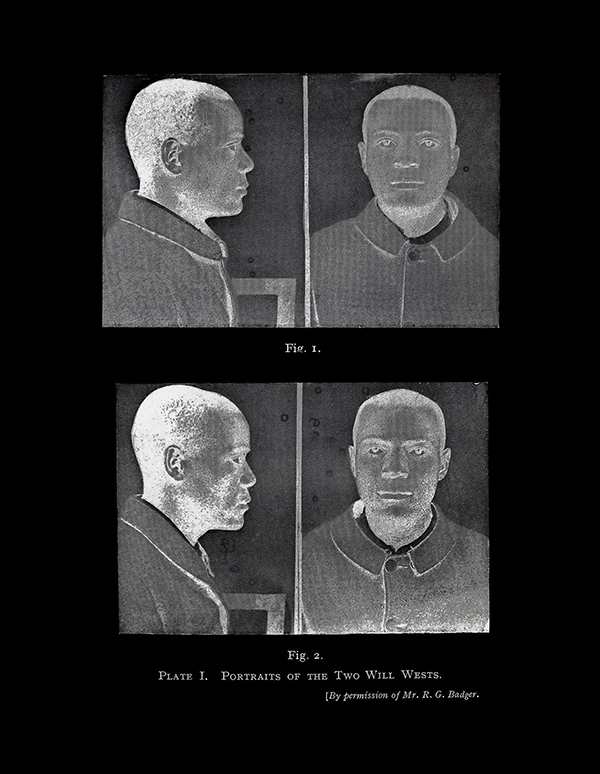 News of the recent upheaval at the National Gallery of Canada in Ottawa had me thinking of less recent, but still not that long ago, (and admittedly different) upheaval at The Power Plant here in Toronto, which had me thinking about my time in various cultural institutions over the decades, which had me thinking about the perspectives we have on history and the forces that drive, record, and/or elide change, which had me thinking about Deanna Bowen’s work. Her Scotiabank Photography Award exhibition at The Image Centre capped off another year of art that devled into the past to shed the scales from my eyes. Black Drones in the Hive, originally commission by the Kitchener-Waterloo Art Gallery and curated by Crystal Mowry, dug deep into the archive to assemble an account of Canada’s colonial history on the local level that revealed the contributions of the ancestors of Black Canadians as well as the injustices committed by the white establishment against them. This exhibition is just one part of a body of work that Bowen has been building for a while now – one that received its own deserving documentation in the form of a Scotiabank Photography Award catalogue. Even if you saw the exhibition, the comprehensive catalogue showcases the scope of the artist’s ongoing project and is a necessary addition to any collection of Canadian art history. Alongside exhibitions like Kent Monkman’s Being Legendary at the Royal Ontario Museum and As We Rise: Photography from the Black Atlantic at The Art Museum, Bowen’s art is part of a larger critical reappraisal being felt at all levels of the art world. 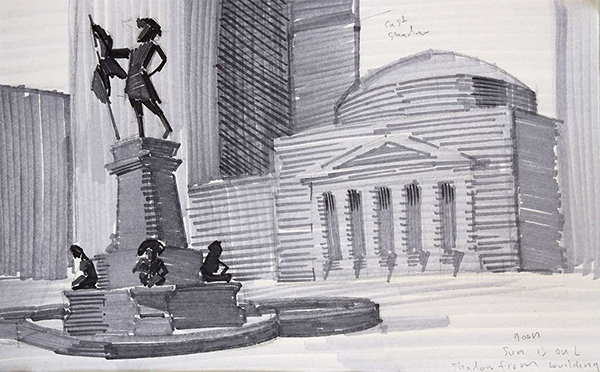 In 2022 I (mostly) got over the anxiety surrounding anything art-related that I had developed by late 2021 – a feat achieved mainly by opportunities to write and semi-regular doses of exposure therapy. And there’s always the extra inspiration from spaces densely packed with works by multiple artists, allowing maximum absorption of varied creativity, such as proximity·pleasure·plasticity at Dazibao. The Montreal Comic Arts Festival offered the opportunity to explore local, Canadian, and international comics, attend workshops, and meet various graphic novelists. (R Kikuo Johnson was rather nice.) While technically a solo show, Post Monumental by Courtney Clinton taught me more about the history of Tiohtià:ke/ Montreal while also involving twenty-four other artists who shared their interpretations of the city.

More politically, there was no shortage of art engaging contemporary issues. Poline Harbali’s They wrote the countries’ borders on my skin considered the ways in which living in a politicized body affects immigration, and Vende tela, compra terra was both politically meaningful and visually engaging – appropriate in a city where many are invested in the Land Back movement. Wheatpastes by collective Collages Féminicides Montreal are a steadfast presence on streets and back-alleys, ironically most often noticed by me while vulnerable downtown at night.

Honorable mentions go to the team that worked on the dazzling and enchanting light and installation design for the Botanical Gardens’ Gardens of Light, as well as Seeing Loud: Basquiat and Music at the MMFA, which I’ve been told is excellent. Not that I’d know just yet, but at least it’s on until February! ¯\_(ツ)_/¯

Maeve Hanna on the East Coast 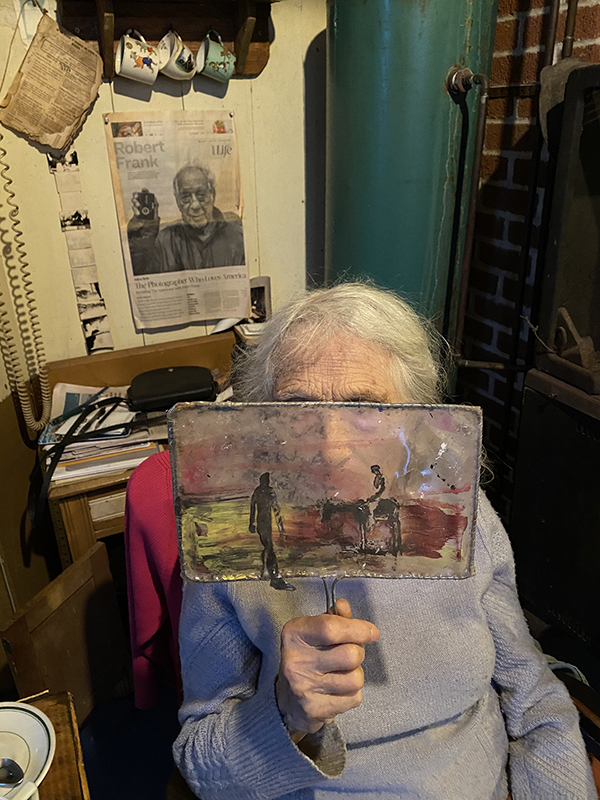 In 2022 I was immeasurably moved by Lou Sheppard’s multifaceted exhibition Phase Variations at St. Mary University’s Art Gallery in Halifax. Taking his cue from archival research, with a title referencing both a bacteria biological process and musical notation, Sheppard created a series of performable scores tracing different forms of movement, regulated by laws restricting the freedoms of the 2SLGBTQIA+ community. Equally thrilling was Control is Cassandra by Nova-Scotia born, Ohio-based artist Sheilah ReStack and her partner Dani ReStack at The Blue Building. The duo’s work is conceptually rigorous, yet sumptuous and deeply moving – in particular their inquiries into queer and lesbian intimacy and domesticity. Seeing and witnessing lesbian intimacy is unique, touching, and crucial work as lack of visual references to lesbian love and sex continues to persist.

Local all-night art events mirrored on Nuit Blanche peppered the landscape including in hamlets of counties close to home. I was sad to miss Antigonight – Antigonish’s all-night art event where Newfoundland-born, New Brunswick-based queer artist Lucas Morneau performed as their alter-ego the Queer Mummer, a character mixing the Newfoundland tradition of mummering with camp and drag. I was also intrigued by Bird[s] in Cyber[Space] at Atelier d’estampe Imago | Imago Print Studio in Moncton. Created by Profs. Samphire Green and Djinn Proxy with The Binder Institute, it focused on the Pokémon character Porygon, a man-made entity that consists entirely of programming code, moves freely in cyberspace, and is, as Green notes, also “… genderless [and] pink and blue [trans flag themed] …” This exhibition carved out a space for academic thinking and joyful yet compelling artistic creation all from one video game character.

Lastly, at the beginning of September I visited the Inverness County Centre for the Arts in Cape Breton to see June Leaf in Mabou since 1969, an exhibition of work by the American artist. That day, place, and the exhibition all felt transformative. I left feeling deeply nourished intellectually, even down to the cellular level of my being. I have been buoyed since by this work in its complexity and simple beauty of capturing daily life.