It’s been a bit of a turbulent year in Calgary’s art scene to say the least, so sometimes it’s nice to take a break, go for a walk, and enjoy the simple joys in life. Qian Cheng’s What are your weekend plans? 你的周末计划是什么？offered us just that, with some added benefits. 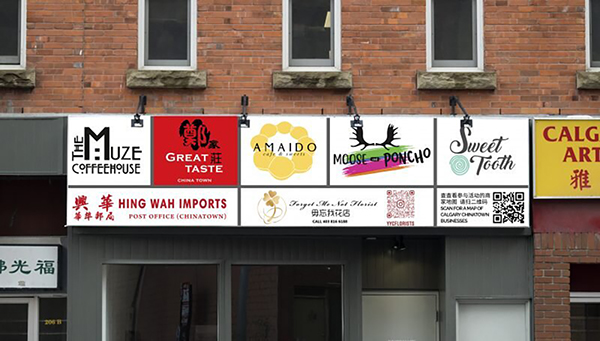 Qian Cheng, What are your weekend plans? 你的周末计划是什么?, 2021, print on billboard at The New Gallery

Many of Moh’kins’tsis/Calgary’s artist-run centers have gone through significant staffing and board member changes, such as The New Gallery, The Bows, and TRUCK Contemporary Art. TRUCK itself saw the departure of both co-directors and multiple board members, and smartly took an operational pause to restructure before reopening this fall with fresh new faces.

With all of these institutional shifts, various messes, and the slow ease back into in-person programming, 2021 has felt like a winterspring following the Summer of 2020, slowly thawing and testing our feet on shifted ground.

What are your weekend plans? was a moment of peace amongst the chaos of us all just trying to figure it out. Occupying the billboard space above The New Gallery, Cheng’s project is a phenomenal example of site-specificity, resourcefulness, and considerate application of the mutual aid principles we were all reminded of these past couple summers. 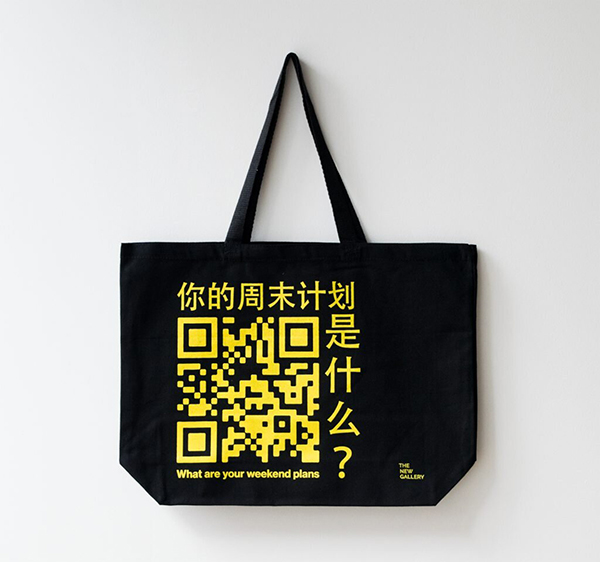 Qian Cheng, What are your weekend plans? 你的周末计划是什么?, 2021, tote bag

A “response to the ongoing global pandemic and its adverse effects on the socio-political and economic sectors experienced within the Chinese diasporic community in Calgary Chinatown”, the billboard advertises seven local businesses in Calgary’s Chinatown, with a QR code leading to a virtual map of a couple dozen others. Encouraging viewers to then visit and patronize/promote at least three of these businesses in exchange for a free tote bag, What are your weekend plans? addresses the question of how one could get viewers to actively visit and engage with a work in person during a time when in-person showings were only barely re-starting. Despite such a limited space, Cheng harnesses its full potential, transforming a billboard into an outing, an afternoon, an adventure.

As someone who has generally been hiding away from the world the entire year, it was a great opportunity to motivate myself into stepping out of my COVID-isolated depression hovel and into the real world to enjoy some earthly delights. After walking the slushy sidewalks to see the billboard itself, I made my way to a couple of my favorite places in Dragon City Mall.

I had missed the unbelievably soft glutinous rice balls at Rainbow Bakery, I realized. Grabbing a vegetarian Zongzi there and a bubble tea from Royal Tea House, I felt grateful to finally be trying something different than my usual after months of the same-old. After checking Hing Wah Imports to see if they had any new microwave cookbooks (they did not) and leaving with a pretty bowl instead, I made my way home feeling satisfied and light. I had somehow managed to enjoy some artwork, fill my belly, and support local businesses all in one.

What are your weekend plans? 你的周末计划是什么？ was a productive, positive, disruption to the forced monotony of pandemic routines, and made for a lovely final engagement with the Calgary artist-run community before I fled eastwards.