My movement through the city of Calgary has shifted markedly over the last year as I learned to know it through its urbanity and sprawl, as well as further away, the subtlety of low foothills and magnitude of the Rocky Mountains. As I came to know the province and city more intimately, the echoes of art sisters I met through travels, exhibitions, readings, gatherings, and divinations moved laterally within these colonial borders of Alberta, reverberating with nuanced political charges of the times we are in. If you know this landscape, you know the Elbow and Bow Rivers pass through here and this has been the meeting place of the Indigenous of this place for millennia.

Mohkinstsis is the Blackfoot word for Elbow.

This is the opening line from the land acknowledgement of Untitled Art Society’s Living Text project. I recalled hearing it at the gallery this past summer. Mohkinstsis I am coming to know. There is a powerful charge that rests in the land here, the confluence of the two rivers both originating in the Rockies. Knowing the land here is how we grow our knowledge of this place and come together through what it can offer us.

My enthusiasm for Calgary waned somewhat with the provincial election that saw the United Conservative Party come into power after a short breath of fresh NDP air, which was the inspiriting, transformative moment at which point this newcomer arrived. The reverberations of this abrupt political change are still being felt across the city. I hear it in the voices of my peers. I don’t believe I am alone in this untethering. Reflecting on 2019, salient themes emerged here and abroad involving the arts. Here, in this particular place, community emerged as a lodestone, drawing people around each other through hope, love, and gentleness. 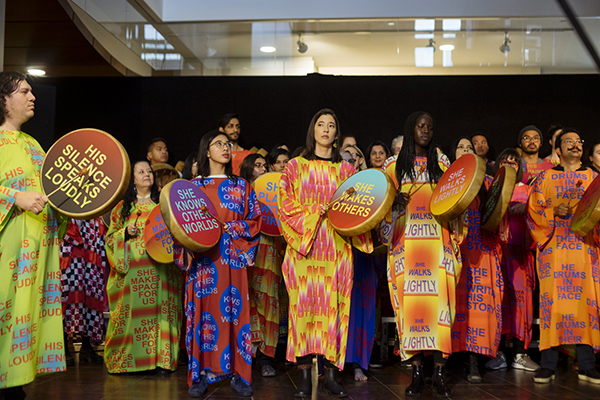 Jeffrey Gibson, To Name An Other, 2019, performance

This coming together of spirits was reflected in the transcendent performance To Name An Other by Jeffrey Gibson. Presented as part of Time Carriers, Gibson’s solo exhibition at the Esker Foundation, the performance included fifty volunteer members of the community in a drumming ceremony that united voices around recent global political and climate emergencies. It opened with a single voice, singing, the drum in her hands the heartbeat of her body, the room, the world in that moment. Each of the volunteers wore a robe and carried a drum – both elements of Time Carriers.

Their voices carried through the space in different languages, different pitches and timbres, speaking the words inscribed on their robes and drums. The drum carried through, always, the heartbeat of the moment. The phrases are all simple sentences that consist of few words but manage to succinctly translate powerful messages. One participant wore the words “They protect the land,” but spoke “He lies to us.” It was a particularly moving yet heavy moment when considering the recent federal election and Prime Minister Justin Trudeau’s failure to meet Canadians’ expectations after his first term in office. 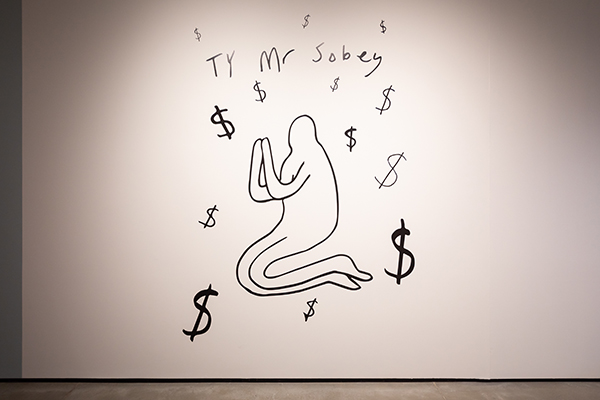 The Sobey Art Award Exhibition at the Art Gallery of Alberta in Edmonton was celebrated in this province for the first time in the award’s history. Inuvialuk artist Kablusiak working in Mohkinstsis was among the shortlisted artists along with Nicolas Grenier, Anne Low, D’Arcy Wilson, and this year’s grand prize winner Stephanie Comilang. Their piece TY Mr Sobey, a large wall-sized drawing of a figure kneeling in a prayer position as if to give thanks to the man himself, is cheeky in its critique of the patriarchal nature and narrative present within the structure of the award, while also acknowledging the magnitude of gratitude that extends through the arts to see our peers recognized and celebrated at such a level. Also included in the exhibition are Duck Lake and NorthMart. Both works were created during in the summer of 2018 as part of the TD North/South Exchange residency program. For the residency, Kablusiak traveled to Inuvik, part of their ancestral territory and a place they had not visited as an adult. Here, the artist recreated their performative ghost series. A figure wearing a white sheet with two eye holes roughly cut out is pictured in front of a lake and beside a grocery store. The images are quirky, humorous, and nostalgic for childhood. The ghost becomes hyper-visible standing out in the landscape and Kablusiak uses this manifestation as a means to explore their understanding of their identity as an urban Inuk. 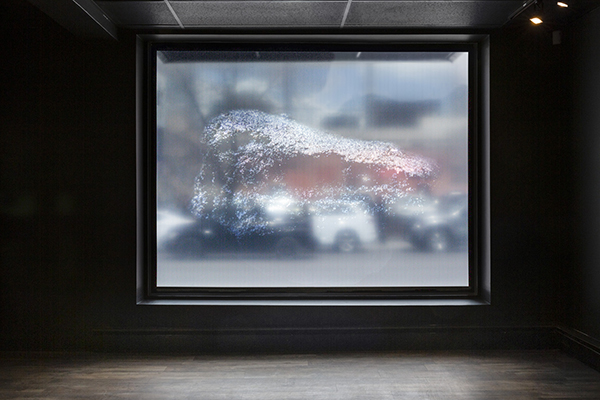 Untitled Art Society has a long history in Calgary. This year was a particularly strong one of exhibitions and programming. Just after the closing of Tsēmā Igharas’ provocative exhibition BLACK GOLD, UAS experienced a catastrophic flood and the building was condemned, effectively shuttering the doors of the organization’s main space. Programming was put on hold as the staff began the difficult task of finding a new home for the gallery in the political and economic atmosphere of the present day. The building still stands in its same location, a part of Igharas’ exhibition – a semi-translucent photograph of bitumen installed on the main floor window – remains in situ.

Daily drives take me past the building whose doors are permanently closed. Despite all of this, the small staff at UAS, consisting of director Natasha Chaykowski, programming coordinator Kaylee Maciejko, and student intern outreach coordinator Mercedes Webb, continue their ardent work putting together critical exhibitions including the latest ambitious project: The Characters: Act I  by Erdem Taşdalen, hosted at EMMEDIA Gallery & Production Society. The truly inspirational part of this near-loss for the arts community in Calgary is the coming together of other institutions to host exhibitions and programs while UAS finds a new home. The newly established Lacey Prize, which recognizes the critical role of artist-run centres and small arts organizations in supporting artists and fostering emerging practices in Canada, awarded the gallery with one of their two runner-up awards. UAS not only provides much-needed affordable, physical studio space for artists to develop their practices, but their programming provides the non-material structures of community within which such creativity thrives. It is a true beacon of the arts community and, during this year of difficulty, continues to present the very best.