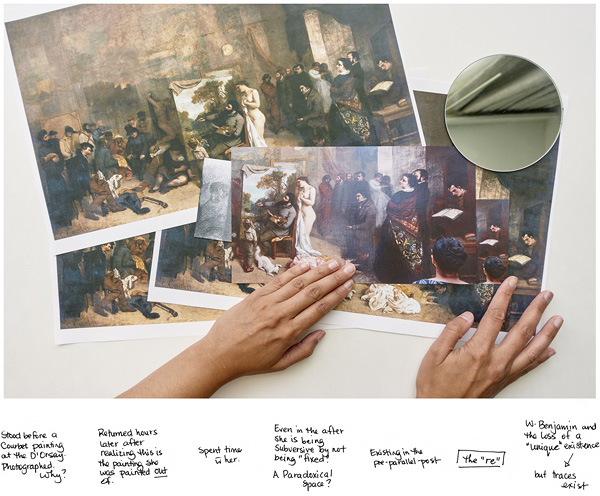 “Even in the after she is subversive for not being ‘fixed,’” artist Erika DeFreitas notes in the fifth image in the series arriver avant moi devant moi (which roughly translates to: “to arrive before me, in front of me”). Written in response to Gustave Courbet’s L’Atelier du peintre (1854–1855), which DeFreitas viewed at the Musée D’Orsay in Paris while on an artist residency, this statement reflects the admiration and connection the artist holds for Jeanne Duval (ca. 1820 – ca. 1862).

Duval, a Haitian-born French actress and dancer, is just one of many Black women artists, muses and historical figures invoked in this presentation, from an unnamed subject featured in a painting by Frédéric Bazille in she returns in the midst of echoes and in the pause and the mirrored peaks to Edmonia Lewis, Senga Nengudi, Howardena Pindell and countless others in DeFreitas’ very strongly may be sincerely fainting. The process of writing art history is one of amplification and repetition; here, DeFreitas’ poetic gestures reimagine a canon in which Black women’s artistic labour is as valued and commemorated as the work of their contemporaries.

This exhibition is complemented by a text by Daisy Desrosiers.

Erika DeFreitas is a Scarborough-based artist whose practice includes the use of performance, photography, video, installation, textiles, works on paper, and writing. Placing an emphasis on process, gesture, the body, documentation, and paranormal phenomena, she works through attempts to understand concepts of loss, post-memory, inheritance, and objecthood. DeFreitas’ work has been exhibited nationally and internationally. She was the recipient of the TFVA 2016 Finalist Artist Prize, the 2016 John Hartman Award, and longlisted for the 2017 Sobey Art Award. DeFreitas holds a Master of Visual Studies from the University of Toronto.

Henry Moore (1898-1986) is known as a sculptor of monumental works, but his contribution to the graphic arts is not to be ignored. Moore’s portfolio Elephant Skull (1969-1970) examines the contrasting qualities of lightness and density in the titular skull, gifted to him in 1968 by his friend, the biologist Sir Julian Huxley. Drawn from the MacLaren’s Permanent Collection, this deluxe edition of the Elephant Skull portfolio features thirty-three works as well as five special edition prints. Through delicate and sensitive line work, Moore takes the viewer on a journey around and through the elephant’s skull, exploring the enigmatic forms he discovered.

This spotlight into the studio practice of Barrie-based artist Sean George reflects his interest in the un-monumental of the contemporary urban landscape, particularly as it has manifested during the global pandemic. Sean George is an artist, art educator, and cultural worker. He was born in Brooklyn, NY, and has lived in Trinidad and Tobago, Los Angeles, Vancouver and Toronto. He is interested in the intersection between community, art, identity, and transformation. He believes culture can raise awareness of most topics, whilst it can be alienating. In the pursuit of art, George harnesses dialogue, research, experience, and aesthetics to create work that enables him to build his understanding of the world he inhabits.

The Uncanny Outdoors presents contemporary Canadian artworks from the MacLaren’s Permanent Collection that render the natural world strange. The uncanny nature of each work emphasizes the ways in which our understanding of the landscape is conditioned by how we enjoy, settle and extract value from it. Artists represented in this exhibition include Lois Andison, Mary Anne Barkhouse, IAIN BAXTER&, Blue Republic, Ed Burtynsky, Jane Buyers, Robert Hengeveld, Laura Millard, Takao Tanabe, Tony Urquhart and Tim Zuck.

Acknowledgements
As a registered charity, the MacLaren Art Centre relies on public and private support for its operations and programmes. The MacLaren Art Centre gratefully acknowledges the ongoing support of its Members, Patrons, Donors, Sponsors, Partners, the City of Barrie, the Ontario Arts Council, the Government of Ontario, the Canada Council for the Arts and Canadian Heritage, and exhibition sponsor the Sandbox Centre. 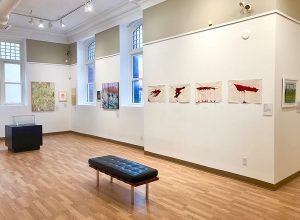 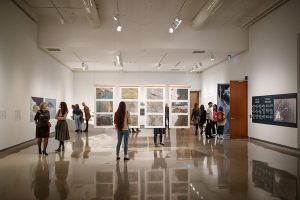