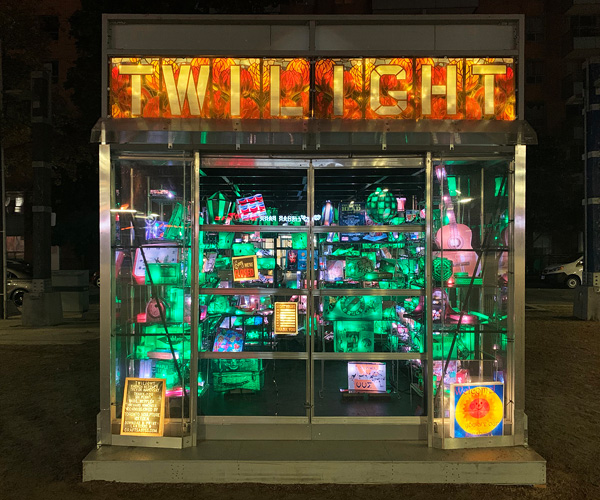 Twilight is artist Rhonda Weppler and Trevor Mahovsky’s DIY temporary public artwork, housed in an improvised pop-up structure and containing delicate, taped-together monuments to everyday things. The project is a giant lantern made to mimic an antique store, in homage to the many small business that have lined Queen Street West, including those which now only exist in memory. The transparent store contains 500 lanterns, which comprise a glowing archive of vintage items, ranging from books, to old technology, to musical instruments. Many of the objects, such as a TTC fare box, speak to the history of Toronto, while others point to the history of the project itself, representing objects reproduced for past iterations of stores the artists have created in cities such as Washington, Toledo, Dallas, and Atlanta. Each lantern has been painstakingly made by photographing every side of each object, which the artists then print, cut, fold and tape together to make each item by hand.

The store is illuminated in a repeating computer-controlled light pattern, starting at 7:45pm each night. The lanterns are lit one-by-one until the whole store is bright, as if a phantom shopkeeper were stocking the shelves. Their lights then shift, object by object, from neutral white to one of the colours of the rainbow, causing the store to take on seven different colour moods over the course of the night. Once the store is fully lit, the lanterns are extinguished one by one, and the lighting cycle repeats.

There is an online archive of many of the files used to assemble these lanterns, made available for anyone to print out and make for themselves, at the artists’ web-based project www.craftsabyss.com. 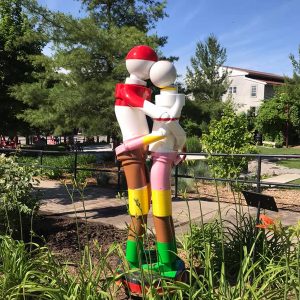