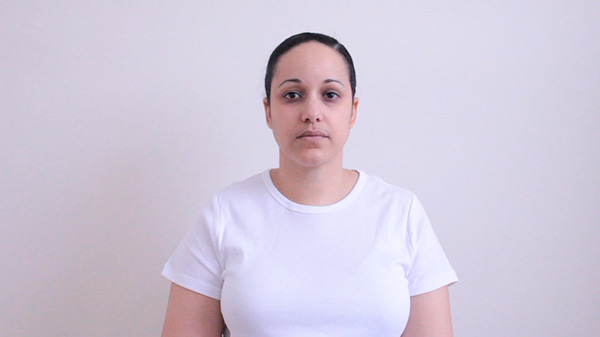 forgive me for speaking in my own tongue – 4 mins and 12 secs before entering melancholy, Erika DeFreitas, 2016

The third edition of this year’s Curatorial Incubator starts Friday, October 23, 2020, with an Instagram Live introduction by emerging curator Sanjit Dhillon at 7pm EDT followed by the first title in her program, forgive me for speaking in my own tongue – 4 mins and 12 secs before entering melancholy by Erika DeFreitas.

On Friday, November 6, 2020, Sanjit Dhillon will be in conversation with artists Erika DeFreitas, Johan Grimonprez, and Saskia Holmkvist at 7pm ET on Zoom. Check the Vtape website for a link to this conversation.

Sanjit Dhillon writes about her approach to the theme:

Slow Unfurling utilizes contemplation, stillness, and reflection to examine constructs that shape the perceived self and conditioned states of being. A heightened sense of presence, as proposed by the films in this program, offers the potential for imagining new ways of living.

I began the process of selecting these films as our established modes of being were brought to a halt. The routines and rituals that we regularly engaged in without any thought transformed into absences overnight. A rupture formed in our accelerated culture of individualism and competition.

It is this rupture, however, that has impelled a collective probing of many of the values entrenched in capitalist life. This program forms a deeper investigation into how these values are upheld and consequently shaped our ability to imagine a future outside of capitalism. The films presented in Slow Unfurling arrest these socio-political constructs with stillness, contemplation and reflection.

Mark Fisher says that capitalism has not only become the only viable political and economic system, it has become impossible to imagine a coherent alternative. In the contemporary moment, the only option is to envision and work towards an alternative. Through ongoing reflection, as exemplified by these films, the potential for imagining new ways of living beyond reformist principles can be proposed. To do so is to live in hope.

Sanjit Dhillon is a multidisciplinary artist, curator and cultural worker based in Tkaranto/Toronto, Canada. Her practice interrogates constructions of memory, embodied subjectivity, precarity, and the limits of visual culture in creating and disseminating identity. She has curated for Xpace Cultural Centre, DUTY FREE zine and participated in residencies at Whippersnapper Gallery and Roundtable Residency.

Johan Grimonprez, Raymond Tallis on tickling, 2017, 08:00
Neoliberal individualism requires a collective consciousness to uphold and sustain it. Raymond Tallis on Tickling proposes that there are no individuals, as consciousness is fundamentally relational. Tallis remarks: “We are ourselves only through being in dialogue with others.” Tallis challenges the notion that humans are merely organisms acting according to their nature, and that much of the human experience cannot be quantified as much as science has tried to do so.

Saskia Holmkvist, Blind Understanding, 2009, 12:05
In Audre Lorde’s seminal speech, The Transformation of Silence into Language and Action, she urges the audience to consider their commitment to language and the power of language. It is not only imperative to interrogate the truths we speak, but to examine the language in which these truths are spoken. “What are the words you do not yet have?” Lorde asks, “What do you need to say? What are the tyrannies you swallow day by day and attempt to make your own?”

In Blind Understanding, Holmkvist poses a parallel question: “How do we know what we think we know?” Through a series of loosely connected fragments, the artist meditatively explores the arbitrary codification of language and its relation to power, change, and assimilation. Holmkvist illustrates how our modes of communicating are rarely neutral and at times insufficient, yet perpetually in flux.

Erika DeFreitas is a Scarborough-based artist whose practice includes the use of performance, photography, video, installation, textiles, works on paper, and writing. Placing an emphasis on process, gesture, the body, documentation, and paranormal phenomena, she works through attempts to understand concepts of loss, post-memory, inheritance, and objecthood.

Johan Grimonprez’s work dances on the borders of practice and theory, art and cinema, documentary and fiction, demanding a double take on the part of the viewer. Informed by an archeology of present-day media, his work seeks out the tension between the intimate and the bigger picture of globalization. It questions our contemporary sublime, one framed by a fear industry that has infected political and social dialogue. By suggesting new narratives through which to tell a story, his work emphasizes a multiplicity of realities.

In Saskia Holmkvist’s work, questions of agency and professionalized language are explored through fractured narrative, employing performance, orality, film and improvisation. The works address consequences of power structures in communication such as translatability of subject positions as well as historical trajectories and post colonial presence by interacting with methods of communication borrowed from fields such as interpretation, psychology, journalism, and improvisational theatre. 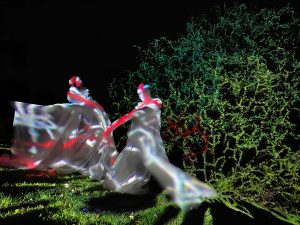