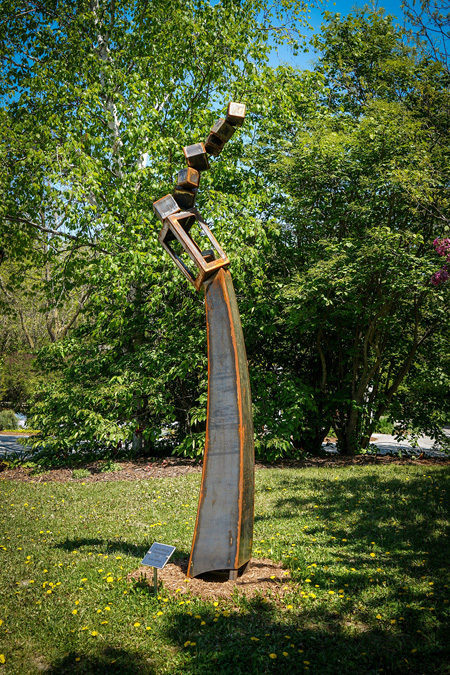 Claude Millette is a well-known Quebecker artist. The selection of Millette’s works focus on fifteen sculptures produced between 2008 and 2021, carefully placed in the garden, coming mainly from two series: Corphéum and Æquilibrium. Works of the first series rely on verticality and references to the body, while those of the second favour studies on the tension between balance and imbalance. Here, one can see that the works interact remarkably well with their environment, harmonizing with the landscape thanks to their curves and hues, especially those of Corten steel.

“An exhibition is always a cherished occasion for meeting and sharing—to which, the one at the Jardin adds its exceptional surroundings”, writes the curator, Pascale Beaudet. It is especially true this year, due to the circumstances, the garden being closed last year. 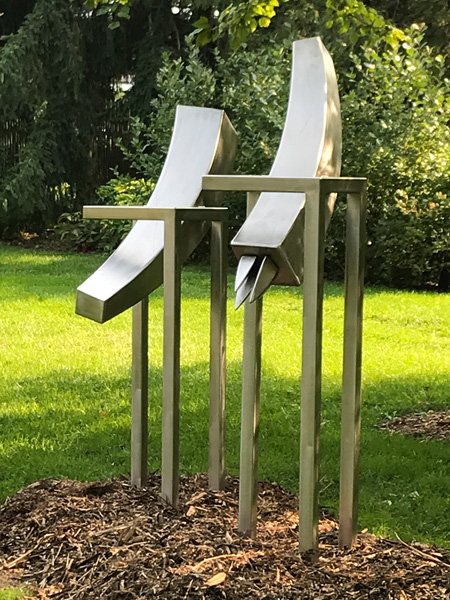 Claude Millette was born in 1957 in Saint-Hyacinthe (Quebec), he lives in Saint-Bernard-de-Michaudville and pursues a practice of sculpture, public art, and installation. To date, he has produced an impressive number of public sculptures—more than 40. Most of them are in Quebec, especially in the Montérégie and Montreal regions, and his most recent will be installed in the Town of Mount Royal in 2022. Other sculptures are in Ontario, in the United States, and elsewhere in the world. Among the noted solo exhibitions of his career are Corphéum, at the Maison des gouverneurs de Sorel-Tracy, in 2017; La résistance des matériaux: Sélection d’œuvres, de 1976 à 2006, at Expression, Centre d’exposition de Saint-Hyacinthe, in 2006, and Musée de Lachine, in 2007; Captivité – Mouvement, first proposed at Expression in 1994; and Trajectoires et Tensions, inaugurated in 1982 at the Musée du Québec’s Galerie du Musée (Quebec City). Millette took part in several international sculpture symposiums, including the 4th edition of Beauce Art: L’International de la sculpture, Saint-Georges, in 2017; the 7th International Sculpture Symposium in Penza, Russia, in 2014; the 2nd edition of the Symposium international de sculptures monumentales in Matour, Burgundy, France, in 2010; the IV Simposio Internacional de Escultura Monumental in Alajuela, Costa Rica, in 2006. Many of Millette’s works are part of public and private collections.

With a doctorate in art history from Université Rennes 2 (France), Pascale Beaudet is an independent curator and a seasoned writer. As curator, she has conceived and organized around thirty exhibitions of contemporary art, including several international events. In 2019, among other things, she curated an exhibition on René Derouin at the Musée d’art contemporain de Baie-Saint-Paul, Quebec, as well as the event Vitrine sur l’art, in Montreal, Quebec. In 2009, she was curator of two international biennials: the outdoor sculpture symposium of the Fondation Derouin, in Val-David, Quebec, and the Biennale internationale du lin de Portneuf, Quebec (visual arts section).

She has authored more than 150 texts on modern and contemporary art, published in exhibition catalogues and art journals in Quebec and elsewhere, among them Vie des Arts and Espace, the Australian magazine Ceramics: Art and Perception, and the French journal Critique d’art. 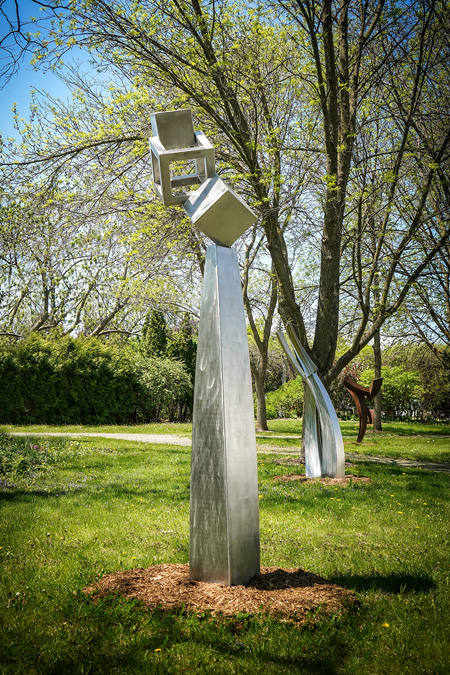 The Jardin Daniel A. Séguin is a floral park having an educational, cultural and tourist vocation. The living laboratory, of the Institut de Technologie Agroalimentaire (ITA), is recognized for its large collection of annual flowers. This Maskoutain flagship expresses its beauty through 20 thematic gardens highlighting ornamental, environmental and nurturing horticulture. This summer, the Garden present a special program commemorating the 25th anniversary of the Garden. For the occasion, the public will be able to purchase the historical book of the Garden, visit the new InterLAB Garden-School, and discover the “Ramifications” exhibition by the artist Claude Millette. The Jardin Daniel A. Séguin it’s 25 years cultivating knowledge and life!