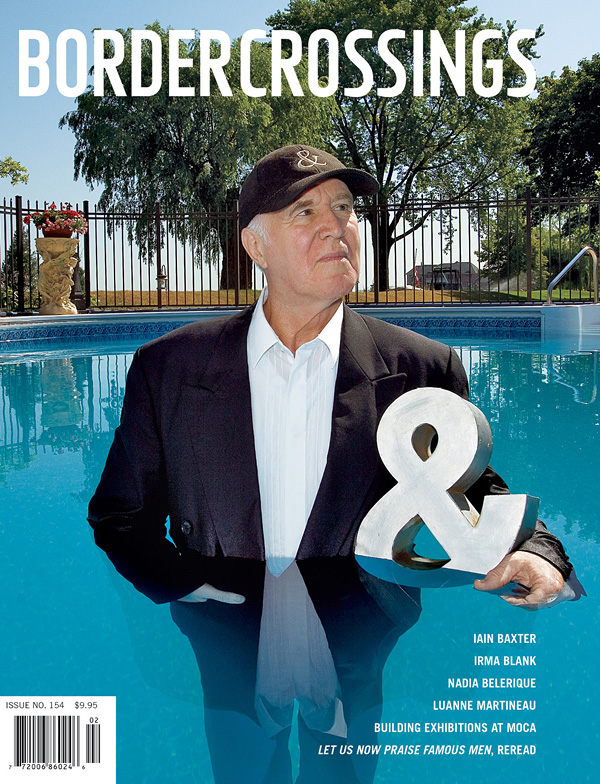 This is the time for thoughtful reading, looking and contemplation.
In the Summer issue of Border Crossings we are providing exactly that.

Through a life-long career artist IAIN BAXTER& has provoked and prodded visual and textual tropes. He is a merry prankster in both fields. There are no limits; everything is expansive and open-ended — IAIN BAXTER&, and more. The conversation with the artist on these pages is playful, clever and rich in ideas. The button Baxter& produced in 1971 saying, “Art is all over” was far from an end; everything was just beginning.

In an elegantly argued article Stephen Horne gives us the asemic writing works of Irma Blank, the German born, Italian artist who continues to produce her transcendent, repetitive paintings and drawings. Stephen Horne writes: “Looking into a page — perhaps a double pair of facing pages with lines drawn horizontally — offers an experience of tautology itself; that is, I feel and recognize the attraction of attraction, the attraction of repetition”. He calls up like-minded work by artists Robert Ryman, Agnes Martin, John Cage, Garry Neill Kennedy, Henri Michaux, Hanne Darboven and Sol Lewitt, while Blank’s work remains particularly her own.

Between photography and installation, and that space between, is the terrain artist Nadia Belerique traverses. In the interview with her in this issue Robert Enright says, “It is interesting how elusive possession is for you, whether optically or physically. It’s as if everything, from an object to a human relationship, has the potential to slip away. And Belerique responds: “Yes. I have begun to think about it in terms of the separation of things and their meaning, the separation of you and the other thing. I want that separation to be imagined; I want it to be a kind of construct; I want there to be something in-between those spaces of separation.” Looking at her tall, tall tables, well beyond the reach of any extended hand, another thing comes to mind; it’s Alice’s response to the little bottle saying “Drink me”, as she alarmingly shrinks and diminishes. An enchantment.

Four artists — one on each floor — have installed site-specific works at MOCA, the Museum of Contemporary Art’s new home in Toronto: Carlos Bunga, Megan Rooney, Sarah Sze and Shelagh Keeley. Writer Anna Kovler tells us about the building and these four habitations.

Luanne Martineau’s operating sculpture, Knitter Woman, an awkward machine of a production draws on Carolee Schneemann’s Interior Scroll and reminds me too of June Leaf’s treadle sewing machine works. It represents well the assembly of women’s domestic “busy work” and the frustrating limitations that work generated. With its propensity to knot and tangle, the work and the sturdy headless figure producing it require constant curatorial attention and care. As writer Rhiannon Vogl points out, “It highlights the precarious, ever greying boundary between what museums can promise to take on in the service of an exhibition and how far an artist is willing to test those limits.”

Let Us Now Praise Famous Men, was intended, said writer James Agee about the project he undertook with photographer Walker Evans, as an attempt “to recognize the stature of a portion of unimagined existence, and to contrive techniques proper to its recording…”. Emily Doucet, the author of the article, “Reading Let Us Now Praise Famous Men together, again”, noted that the intent of the initial project was to communicate the social problems of the Great Depression in the rural South and the urban North through documenting “the unvarnished existence of the average white sharecropper family in Hale county, Alabama,” (this, as is still the case now, she points out, was a predominantly Black community). The rereading of the initial text is accompanied by an exhibition of work by Helen Levitt, Kadish Morris, RaMell Ross and Lorenza Mondada with Nicolle Bussien and Sara Keel, in collaboration with Hanna Svensson and Nynke van Schepen, which suggests a recasting of images in the James Agee, Walker Evans book.

The magazine is available by subscription and on newsstands. But because many bookstores and newsstands remain closed we suggest you subscribe and receive delivery at home of not only this issue but subsequent issues as well. Or, order a single copy. Both can be done directly on our website. 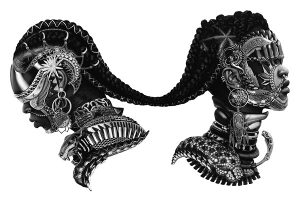 the cut, the tear & the remix: contemporary collage and Black futures