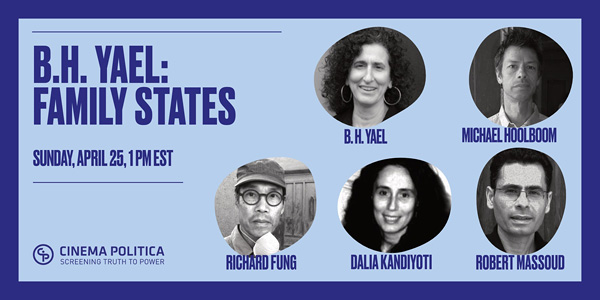 BOOK LAUNCH & CONVERSATION WITH B. H. YAEL AND SPECIAL GUESTS

b.h. Yael: Family States, which editor Mike Hoolboom calls a “community place,” embodies the creative and collaborative spirit of b.h. Yael’s life-work, and as such this event will feature conversations with Richard Fung, Dalia Kandiyoti, and Robert Massoud, three of the book’s contributors. This eclectic publication is sponsored by the ConverSalon collective.

A reception (digital mingling encouraged!) will follow the event and will be facilitated by Ashok Mathur, Dean of Graduate Studies, OCAD University.

The launch will also feature clips from FRESH BLOOD (1996), DEIR YASSIN REMEMBERED (2006) and TRADING THE FUTURE (2008). This selection of short films examines questions of Arab Jewishness, Israeli denial of the Palestinian Nakbah (disaster), as well as the intersections of planetary and religious narratives.

The complete version of the films will be made available for free streaming on Cinema Politica On Demand for a week prior to the event and 48 hours after, and subsequently, a curated selection of Yael’s films will live on the streaming platform.

This event is co-presented with ConverSalon, Another Story Bookshop, and OCAD University, Faculty of Art and the Office of Research and Innovation.

b.h. Yael is a Toronto based filmmaker, video and installation artist. She is Professor of Integrated Media at OCAD University and past Assistant Dean and past Chair of Integrated Media in the Faculty of Art. Yael’s past film and video work has dealt with issues of identity, authority and family structures, while at the same time addressing the fragmentary nature of memory and belonging. Her work most often involves non-linear and hybrid forms, including dramatized and fictional elements combined with first person narration, autobiographical and documentary perspectives.

Michael Hoolboom is a filmmaker and writer living in Toronto.

Richard Fung is a writer and video artist born in Trinidad and based in Toronto. He is Professor Emeritus in the Faculty of Art at OCAD University.

Dalia Kandiyoti is Professor of English at the College of Staten Island, City University of New York and the author of two books and articles on Sephardic, Latinx, and other writing about migrations, diasporas, and the many ways in which people lose and make worlds. Dalia’s current work includes an oral history project and an edited volume about Sephardi Jews and the citizenship laws in Spain and Portugal, both with Dr. Rina Benmayor.

Robert Massoud is Palestinian-Canadian. In 2004, he founded Zatoun, Fair Trade olive oil from Palestine to serve as a symbol of light, hope and peace. The oil is available in North America mostly through faith communities, the grassroots and fair trade network. Robert cofounded a worldwide project called “Trees for Life Palestine” which plants 10,000s of olive trees every year in Palestine. Zatoun is a major supporter of “Project Hope” providing “art as therapy” to help heal many thousands of children living in refugee camps in Palestine. Since 2004, Zatoun has contributed over $550,000 to these two projects. 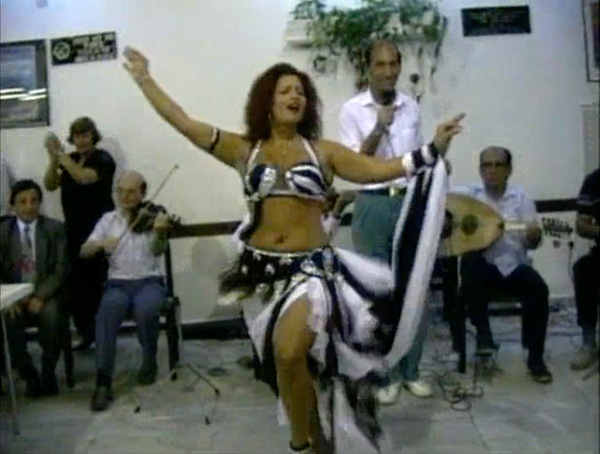 FRESH BLOOD, A CONSIDERATION OF BELONGING is a hybrid documentary or video essay which includes questions around Arab Jewishness, negotiating Palestine, gender, belly-dancing and memory. This video essay, formed by personal narrative and including a return to Israel/Palestine, engages issues of: Jewish racialized identity, Arab/Jewish dichotomies and the way these come together in Iraqi Jewish culture, and the personal implications of the politics of Palestine and the Jewish holocaust. 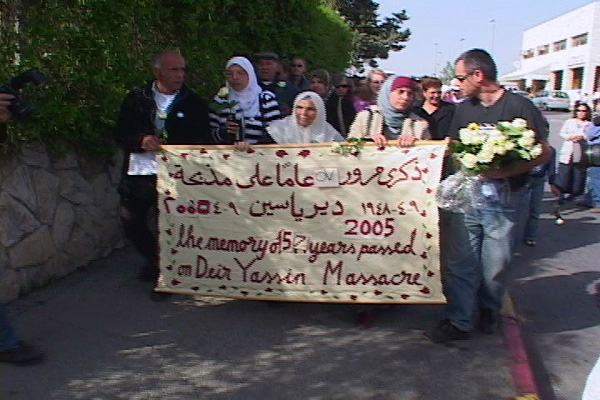 DEIR YASSIN REMEMBERED considers the repercussions of a largely forgotten massacre of almost 100 Palestinians in 1948. The massacre at Deir Yassin was pivotal to Palestinian dispossession. Though Deir Yassin has been partially acknowledged by Israelis, many other massacres of the time have not. The video not only gives an account of what happened at Deir Yassin, but also argues for the need for acknowledgement and commemoration.

TRADING THE FUTURE is a video essay that questions the inevitability of apocalypse and its repercussions on environmental urgencies. Starting with a personal memory, the fear of the rapture, the video addresses the Christian narrative for the end of times, and draws connections to secular apocalypticism and our ready acceptance of a cataclysmic end. The video also challenges the philosophical and practical underpinnings of the symbolic of death, the desirability of the growth of the market place, and the politics of apocalypse, while proposing possible alternatives in the idea of natality, the productivity of biodiversity and the agency of everyday activism. 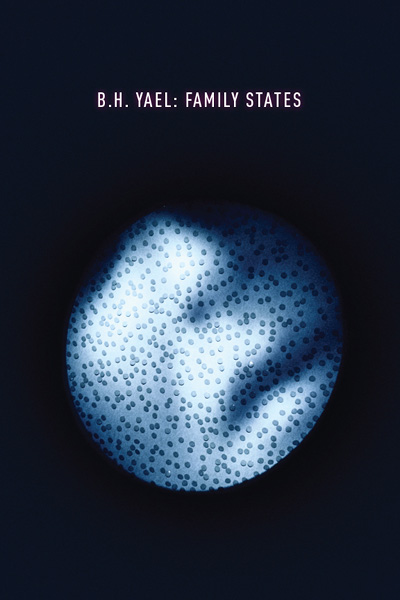 This 140-page book brings together a collection of writings about the essential work of Canadian media artist b.h. Yael addressing issues of power and belonging, Palestine and remembering, gender roles and activism. The ideas and locations featured in Yael’s films and videos reverberate through these responsive texts by fellow artists, filmmakers, writers, teachers, and activists, providing new and startling perspectives. The book also includes an interview conducted by editor Mike Hoolboom and pictures galore.

Published by ConverSalon. Funded by the Ontario Arts Council.

Mike Hoolboom’s book is NOW available at Another Story Bookshop!

With nearly 100 locations in Canada and across the globe, Cinema Politica is the largest campus and community based screening network in the world. Our distribution and exhibition efforts are squarely concerned with impact, activation and engagement, and social change on a local and global scale. As such, we represent and circulate politically powerful, artistically unique and uncompromising documentary films across a diverse and wide spectrum of platforms and venues.

For more info on Cinema Politica and to check out our alternative exhibition network visit our website. 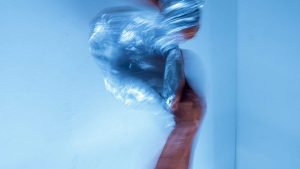