It is a simple, spare object: showing a clean, well-lighted place. An aluminum frame cradles two color photographs in the same large format, showing two window panes bookended by their black metal frames. These are windows in the S.R. Crown Hall at the Illinois Institute of Technology, designed by Mies van der Rohe. Israeli-American artist Assaf Evron captured what looks like a sunset gradient in them: turquois turning by and by to the unlikeliest shade of orange pink. The window is a simple, spare object: the world a clean, well-lighted place. (Andrei Pop, Professor of Art History and Committee on Social Thought, University of Chicago)

Assaf Evron is a graduate of the School of the Art Institute of Chicago (MFA) and is completing an Mphil at The Cohn Institute for the History and Philosophy of Science and Ideas at Tel Aviv University. He is the recipient of various awards, including The Gerard Levy Prize for a young photographer awarded by the Israel Museum for Jerusalem (2012), and The Israeli Ministry of Culture and Education Prize for Young Artists (2010). Among his photographic commissioned works are Aircraft Carrier the Israeli Pavilion at the 12th Venice Biennial for Architecture, the renewal of the Israel Museum in Jerusalem, and the Tel Aviv Museum of Art’s Architect Dov Karmi Exhibition. In 2019, Evron has a Bauhaus related site-specific show at the Elmhurst Art Museum, his first solo US museum exhibition at MCA, running concurrently with the Chicago Architecture Biennial, and he has been announced as an Artadia 2019 Chicago Awards Finalist.

The two large-scale photographs will be accompanied by a Library of Games, a collection of Bauhaus-designed or -inspired games visitors are welcome to play in the Goethe Media Space.

Part of the Goethe-Institut focus on #Bauhaus100.

In 2019, Germany is celebrating the centenary of the founding of the Bauhaus, together with partners worldwide. Founded in Weimar in 1919, relocated to Dessau in 1925 and closed in Berlin under pressure from the Nazis in 1933, the seminal design and architecture school, which included Mies van der Rohe, Walter Gropius and Anni Albers, only existed for 14 years. All the same, Bauhaus has become a seminal style and “brand” that continues to have a lasting effect on international architecture, design, and thought until the present day. 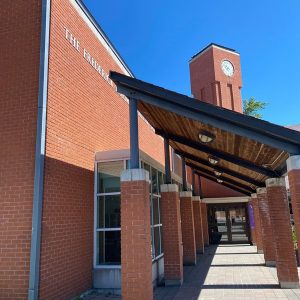