Wnoondwaamin | We Hear Them at Stride Gallery, Calgary

Sound and how it is received was at the fore in the exhibition Wnoondwaamin | We Hear Them at Stride Gallery. Curator Lisa Myers assembled a compelling collection of work by Autumn Chacon, Jeneen Frei Njootli, Melissa General, and Suzanne Morrissette that occupied both the material and auditory space of the venue. 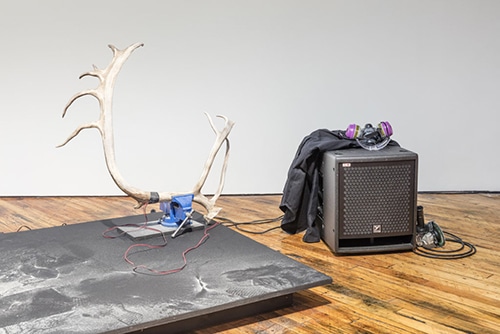 Each work interacted with sound and the aural field in a different manner. Whether through radio frequencies, sound waves, or viewer interaction, the artists presented the viewer with an auditory medley. What might traditionally be encountered visually was instead perceived through active listening. On entering the gallery the viewer encountered Chacon’s Between our Mother’s Voice and Our Father’s Ear and Frei Njootli’s Herd – both of which employ radio waves transmitted through spiritually important objects: a feather and a caribou antler respectively. Utilizing these objects in the form of antennae, Chacon and Frei Njootli allow sound to transmit knowledge and an understanding of land, memory, and sustenance through alternative means.

Suzanne Morrissette’s one and the same involves both video and sound. Two videos are included in the work: one a close-up of dry reeds swaying in the wind; the other a partially frozen bay. Both scenes shroud the urban environment within which they are found. The viewer is an active participant in Morrissette’s work. In order to activate the sound and movement in the video, the viewer has to interact through movement. Their body becomes an instrument and a receiver of sound, in effect acting out an overarching methodology of aural interaction.

In Melissa General’s video Kehyá:ras, what resembles mythic sounds emanate from the artist’s footsteps. The ceremony of being one with the river opens the piece as she washes herself and begins to laboriously move through the current, collecting the enriching substance of that space. The river acts like an instrument in the world, playing sounds often overlooked. As General moves through the river we are one with her and can feel the water through reverberations in the gallery space. The work becomes a bridge between the visual and auditory in a bodily sense. Overall, the exhibition was, as Myers writes in her curatorial statement, an occupation of space that is vital to defending communities: the occupied and unceded territories of this country.

Lastly, I would like to acknowledging that I write from the position of a settler on Treaty 7 territory and Turtle Island. As such my perspective is that of a non-Indigenous individual and I use language and interact with the work from this position. I humbly acknowledge this place that I hold and extend my gratitude to the Indigenous peoples of this land.

Wnoondwaamin | We Hear Them was on display from September 14 to November 3.
Stride Gallery: http://www.stride.ab.ca/
The gallery is not accessible.