TIFF’s pink carpet rolls out every September for the other cinema; misfits, curios and fascinations made by artists in a program named Wavelengths. Three stand-out works come to us from Moyra Davey, Angelo Madsen Minax, and Parastoo Anoushahpour. 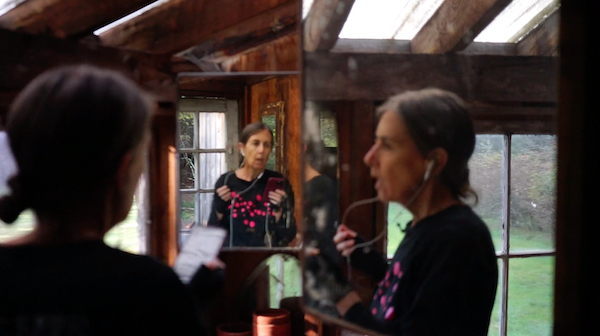 Moyra Davey extends the venerable Canadian tradition of the artist’s home movie in her hour-long opus Horse Opera. Set in her country getaway, the screen swells with horses and bears, though fantastical insects and extravagantly coloured lizards also make appearances. The artist arrives, as she has so often in earlier work, as a blurry figure pacing the room’s shadows, talking into her phone, delivering a signature voice-over that moves the journey forward.

The text is delivered in a breathless staccato, with an emphasis on the off-beat, pausing in the middle of a well-turned phrase, running lines together. She revisits her former 1970s club life in New York, when David Mancuso turned his loft into a carefully curated aesthete’s danceathon that doubled as a model society of identity-swapping utopias. As she puts it, “the almost mythical freedom of being united under the silver ball.”

Intercut with memoir episodes are readings of a couple of Hilton Als’ books. His first, The Women from 1998, is written in a midnight hour voice, laceratingly personal and unsparing, as Als examines how deep cultural grooves deform the lives of Blacks in America, including his mother, whose forever smile was the mask she wore to cover the pain. When he was just fifteen he began a secret affair with Owen Dodson, a poet who traded a get-along respectability for success. Like too many others in the book, he died respecting the limitations others kept dishing up for him.

If Davey’s auto fiction/personal essay conjures the ghosts of lost communities, Als offers a critique that similarly begins in the body. Animals offer a vision of alternate societies. The phone acts as witness and archive, a contact prosthetic turned inward, swapping connectivity for connection. Davey didn’t cop these lines from Als but she might have: “Developing a voice requires more than feeling outside of things, though; it requires strength, ingenuity, and the discipline to hear what other people are saying – and then to turn it inside out as you try to unravel the mystery underlying the meaning.”

Angelo Madsen Minax, Bigger on the Inside, 2022, video

Angelo Madsen Minax continues to climb the mountain. His short Bigger on the Inside offers another Covid getaway, a frozen forest idyll, filled with snowy pines and cyber dates. Funny, sexy and irreverent, it’s a pandemic love story. I can feel how the artist’s endless hours at the computer have granted him a digital deftness, the machine already an extension of the body. Prosthetics are always at play here, the sky appears as an extension of the camera telescope, every star is an opening, an aperture, a butt. In this episodic brief, the genius digression is a crudely rendered Drawing Pad triangle – one point is “the lover,” the second “the beloved,” the third is “need.” All of a sudden the whole movie steps up a level and turns into something else. As if it’s taking my head and turning it round the other way. Usually whenever I see screen shots I cringe. Aren’t movies an escape from my desktop God? But here it’s all working, and in the sexting (that provides the movie’s climax, if not the writer’s) every word counts, as if this foreplay was just another form of poetry. Part of Madsen’s genius is to make the heaviness feel so terribly light. 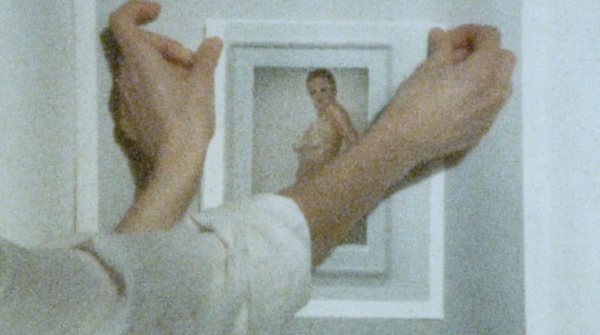 Parastoo Anoushahpour, The Time That Separates Us, 2022, video

While she is better known as part of an unnamed collective that includes her partner and brother, Parastoo Anoushahpour has stepped out on her own to make a long short The Time That Separates Us. It is set in the Jordan Valley, a contested landscape where the Palestinians who have not been evacuated live in degrading conditions, surrounded by illegal Israeli settlements that continue to multiply. It is also the Biblical site of Sodom and Gomorrah, cities of the plain ruined by God after a failed haggling session with Abraham. Abe tips off his nephew Lot about the coming apocalypse, but his unnamed wife is unable to resist a last look back at what used to be home and turns into a pillar of salt. The filmmaker returns us to this moment by circling a salt-rock formation near the Dead Sea rumoured to be Lot’s wife. And in the kind of brilliant insider’s art puzzle that she specializes in with her trio collective pals, an Old Testament moment of Lot’s daughters (also unnamed) fucking their father is recounted, while the artist pins up pictures of pictures showing the famous Lynda Benglis double dildo portrait in Artforum, which Benglis later described as “a study of the objectification of the self, myself in relation to the subject of the pinup.” Though most took it as a fuck you to a male-dominated art world.

The bravura closing sequence follows a soldier down to a viewing platform, overlooking a muddy waterfront at Al-Maghatas where tourists replay Jesus’s baptism by John the Baptist. The old grooves, the old stories, are hard to resist here, carried in stone and salt, issued by government officials, high priests and believers, making a comfortable setting for religion’s oldest and most reliable partner: conquest.

Mike Hoolboom began making movies in 1980. Making as practice, a daily application. Ongoing remixology. 100+ movies. Since 2000 a steady drip of bio docs. The animating question of community: how can I help you? Interviews with media artists for three decades. 30+ books, written, edited, co-edited. Local ecologies. Volunteerism. Opening the door.