Borrowing its title from a W.G Sebald poem, Chechen artist Aslan Gaisumov’s exhibition If No One Asks, currently on display at the Contemporary Art Gallery, is a gentle contemplation of the unseen. The central work, People of No Consequence, is a video loop of Chechen elders entering a room in a municipal hall, sitting in chairs, and waiting patiently. They assemble in a customary way with the men in traditional Cossack hats taking up the front rows. Following behind them are the women dressed in skirts and headscarves; almost as if instructed, they choose seats in the back half of the room. The men habitually play with their walking sticks. Everyone looks down or around, and waits. The dull white room feels theatrical with dramatic valance curtains covering tall windows and rich mahogany doors. The seats are arranged in anticipation of a presentation. The back wall offers a sharply contrasting image: skyscrapers fill a blue sky. This photo adds an absurdity to the scene of participants waiting for something that is never revealed. 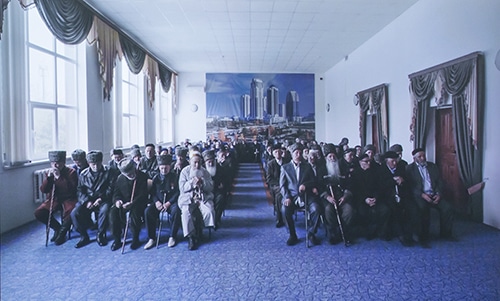 Opposite the projection wall, the exhibition entrance is accented with a small framed work titled Memories of War. It is comprised of one page from a found book. The only words revealed are the title (War Memoirs) and “war.” The rest of the text has been blacked out. While distinct from the video, what links the two pieces is, in essence, the withholding and silencing of histories.

It isn’t until the end of People of No Consequence that a few screens of text reveal the video’s larger context. In the city of Grozny in 2016, 119 Chechen survivors gather for the first time since their deportation from the Soviet Union in 1944 having been falsely accused of collaboration with Nazi Germany. Within the span of less than three weeks, more than 500,000 people were expelled from their homes, less than half of whom survived their forced transportation. In further conversation with curator Kimberly Phillips, she explained to me that the generation who lived through the deportation generally feel unwilling or unable to talk about the events. She requoted Gaisumov, who explained that one of the male participants said, “Why should we speak? Let those who did this do the talking.” 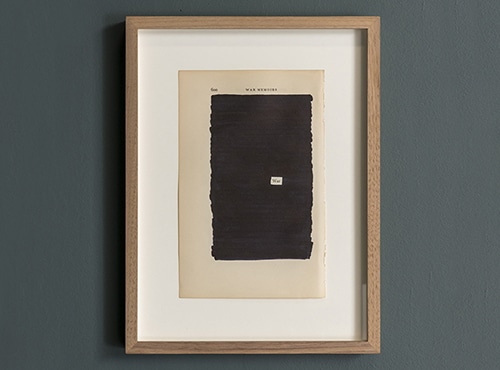 Drawing from Sebald’s themes of memory, war, and the human condition, the viewer unknowingly witnesses the grief that sits – and waits – in these bodies. Gaisumov’s video assembles complicated reflections on silencing, intergenerational trauma, acknowledgment, and reconciliation. While the full significance of the moment isn’t visible, this work explores the liminal space that exists in the waiting.

Aslan Gaisumov: If No One Asks continues until March 24.
Contemporary Art Gallery: https://www.contemporaryartgallery.ca/
The gallery is accessible.