The unlit gallery space, while not scary, felt a little haunted at first. I tried to read the wall panel that gave an overview of the show, but Manoushka Larouche in Détail sur le visage reconnu was clapping furiously in my left ear, and I kept looking over my right shoulder to see if anyone was in the gallery with me. Were the footsteps I heard another viewer or one of the twelve videos playing on loops? Straightening my shoulders, I began to feel self-conscious of my phone use. Sure, I was only taking notes, but did I seem uninterested?

Just then another person walked past, spectre-like and fleeting.

Dealing with the seer and the seen, performance and spectacle, and the relation between performer and witness, proximity ⋅ pleasure ⋅ plasticity blurs the boundaries it questions, like the installation design caused my own nervous insecurity. Through video-based performance, a dozen artists with wonderfully varied practices and ways of relating to the exhibition’s themes are shown simultaneously. Projections and screens fill all corners of Dazibao’s space. The more vocal videos have their audio masked by headphones, but others play aloud and create an ambient atmosphere of their own. 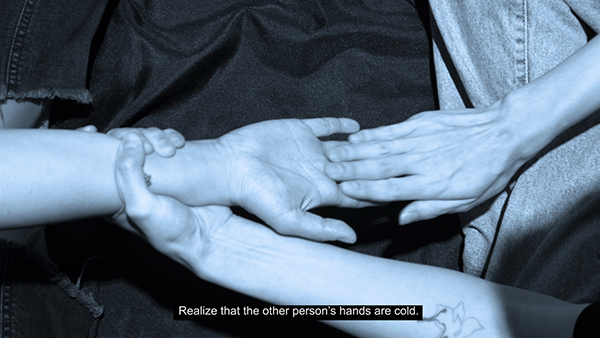 Alleviating the venue’s mild aggravation of my anxiety, Ivetta Sunyoung Kang’s Proposition 1: Hands is a calming and intimate sensory experience, offering the opportunity for two people to sit down and perform hand-warming exercises based on a Korean children’s game.

“Do you think my ancestors would like me?” Lisa Smolkin asks at one point during her video Life’s lil Bitch. I ask myself that too. Like in a colourful DBT fever dream, Smolkin guides herself (and us) through anxieties, nervous systems, issues with late capitalism, and her feeling like an outsider despite her attempts at clear communication. 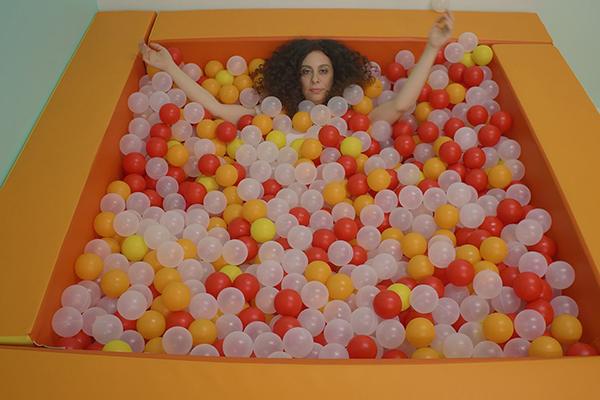 In a room mostly obscured by darkness, Wan Yi Leung punches a masked naked man. While I get how Alone with the cat in the room functions conceptually in relation to the show (power, pleasure, “shameful” desires), it isn’t my intellect that deals with how the work interrogates pleasure. Instead, my wounded, primal brain feels pleasure watching it. How many viewers also get second-hand catharsis by watching this unidentifiable man, a potential stand-in for abusive men in our lives, get his ass literally (but not viciously) beat, without having to worry that any “real” violence was actually taking place or that our enjoyment of it makes us “violent”? He did consent after all, and though the few unfortunate glimpses of his genitals proved them flaccid, the premise of the work suggests a more mutual enjoyment.

While engaging and creatively inspiring, proximity ⋅ pleasure ⋅ plasticity is an exhibition I would warn those with sensory issues to prepare themselves for before seeing. There were other appropriate content warnings at Dazibao’s entrance, but I don’t recall one for potentially overstimulating environments.

By the time I exited the gallery, more people had entered in groups. I wondered what experiences they would have, assuming they would be less conscious of their selves. I could imagine them partnering up to ground any anxieties with the warming hands game, but would they miss out on feeling the simultaneous dichotomy of being the watcher and the watched?