The art fair landscape is certainly part of the larger art world ecosystem. Drawing together the general public, collectors, admirers, socialites, and curators, art fairs offer access to broad audiences for dealers to showcase their roster. Like biennials, they have their own logic and hierarchies that determine who will make the effort to attend them (though I can’t claim any real insider knowledge of the politics that govern fairs, having only attended the Armory Show in New York in 2019 where I was supporting friend and artist Xaviera Simmons). My lack of attendance is admittedly largely due to my aversion of the format, which feels like the culmination of all the weirdest parts of the art world. Despite this, I do recognize their place and often find myself watching videos of panels and public talks held at fairs.

Established in 2007 by the Contemporary Art Galleries Association (AGAC), Papier Art Fair in Montreal is one of the most financially accessible. Last year was the first time the fair charged an entrance fee (only $10), which gave access to all associated programs and workshops including many family friendly activities and panel discussions. Papier claims to be the biggest art fair in Quebec, and in 2019 broadened its scope beyond works on paper to include installations and sculpture. In 2020, as it was forced to move online due to the ongoing impacts of COVID-19, this more expansive approach was necessarily, and unfortunately, sidelined. The virtual format of the fair further flattens an already uni-dimensional media. Relegated to a website or PDF, paintings, drawings, prints, photography, and the occasional ceramic piece are displayed as jpegs. Totally disassociated from scale or context, the art fair model becomes even more disconnected from the discursive, embodied aspects of viewing art that make it so meaningful. I would assume that this format also means fewer sales and interest in artists who are lesser known – unless of course their work translates particularly well to the thumbnail format (which Instagram culture has in fact prepared us well for); however, from what I saw most don’t. This means that save one or two exceptions, the main benefit will be for established artists whose work will have been pre-selected by collectors and curators. 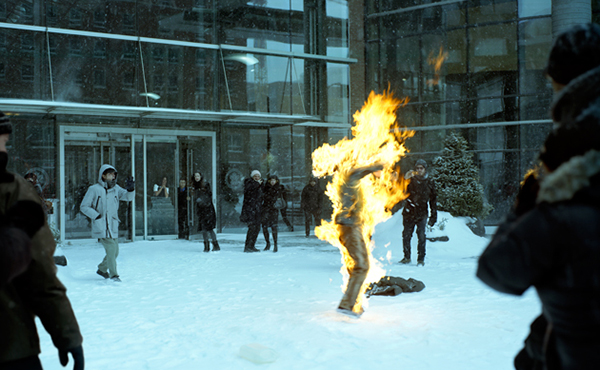 In an attempt to lure new collectors, and also likely as a response to the current economic situation we all find ourselves in (minus Jeff Bezos), organizers have put together a PDF of “affordable works.” The document is unsettling on a number of registers, beginning with the opening image of In Protest by Carlos & Jason Sanchez, a photograph depicting a person fully ablaze, standing in front of a commercial high rise, surrounded by onlookers snapping shots on their cell phones. The thumbnail format, accompanying sales information (including a price tag of $1250 “encadrée”), and the current political moment, characterized by a global push for the dismantling of systemic white supremacy, impact the reading of the artwork as well as the larger condition of the art fair, and succinctly exemplify the bizarre and often disconnected nature of the commercial art world. It is also interesting to compare what the price of an original hand drawn work by Inuk artist Shuvinai Ashoona sells for compared to a photographic print by another artist.

The disruption of the public-ness of the art fair is also central to this moment: what is the impact of the social element of viewing art? How does the presence or lack of communal connoisseurship or current events shift the context? At the Armory Show, for example, Simmons’ booth was immediately across from a gallerist from Los Angeles who represented Todd Gray, an artist who was also Michael Jackson’s official photographer. The gallerist had several of Gray’s works that featured Jackson. Unfortunately for them this iteration of the fair occurred while the recently released documentary Leaving Neverland by Dan Reed was still a major topic of public pain and conversation. This context created a disquieting texture to Gray’s work, leaving the gallery scrambling to adjust their sales pitch and frustrated over what they saw as a distraction.

The same booth found Simmons’ direct confrontation of American anti-black racism uncomfortable. They thought her work was too aggressive and didn’t believe those histories were still playing out today. I am certain if the same work was on display now, their reactions would be very different. Similarly, I have to wonder what the temperature would be like if Papier was still a public event. Would gallerists find themselves feeling the discomfort of having an all-white or predominantly white roster, or promoting work that appropriates stylistic traits of Black artists like Jean Michelle Basquiat? Would buyers feel the self-conscious gaze of purchasing such works in a public space? Would they linger less? I suppose we will never know for sure, but I would hope so.