Instead of offering up a commentary on our times, this year’s exhibitions provided escape in the form of nostalgia. For example, Saskatchewan spent 2017 reliving its glory days as a hotbed of Modernism. Picasso bridged the 400 kilometer gap between Saskatoon’s Remai Modern, home to the world’s largest collection of Picasso linocuts, and the oil patch border town of Estevan, where curator Alex King built a show around a phrase Picasso used to compare painting to poetry – Plastic Rhymes – and an irreverent new generation of artists wrestling with the legacy of Modernism. 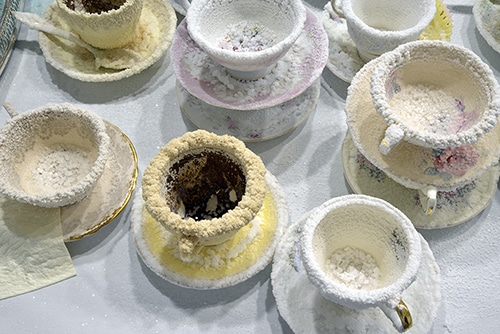 Elvira Finnegan’s Reception at the Dunlop Art Gallery reclaimed another relic of the prairie past: a tea reception, the remains of which the artist doused in brine. Over time, lacy ruffs of salt crystals dyed with tea, coffee and punch dregs rose and spilled over the lips of china cups. Remaining dainties were frosted with glittering saline. The exhibition was incredibly popular, perhaps because we’d all like to see a happy scene so prettily pickled and time halted.

A jolt away from the dreamy comfort of the past came from unexpected quarters – the MacKenzie Art Gallery’s vault. (Full disclosure: I have worked at the gallery since July, but I couldn’t omit this exhibition because it’s honestly one of the best things I’ve seen all year.) Critic and psychiatrist Jeanne Randolph applied her signature fictocriticism to the assembled works in My Claustrophobic Happiness. Andy Warhol’s fuchsia and acid yellow portrait of Queen Elizabeth II reveals the appeal of superficiality: “The outside of Queen Elizabeth is so glamorous and grand there’s no room for an inside.” The thesis of Randolph’s abundant and feverish writings is ultimately anti-Capitalist.

If I could add one more thing, @shitfireplace, created by local artist Eric Hill and musician Jeff Meldrum, is an Instagram advent calendar modeled on the Shaw Fire Log crossed with the loopy insight of a horoscope. Each day a regrettable item – a round of artisan bread consumed by mould, a wooden bedpost, a romance novel – becomes an immaterial puff of smoke. Consumption and nostalgia won’t last long around here.